Nov. 8 election guide: What’s on the ballot in Vallejo and Benicia 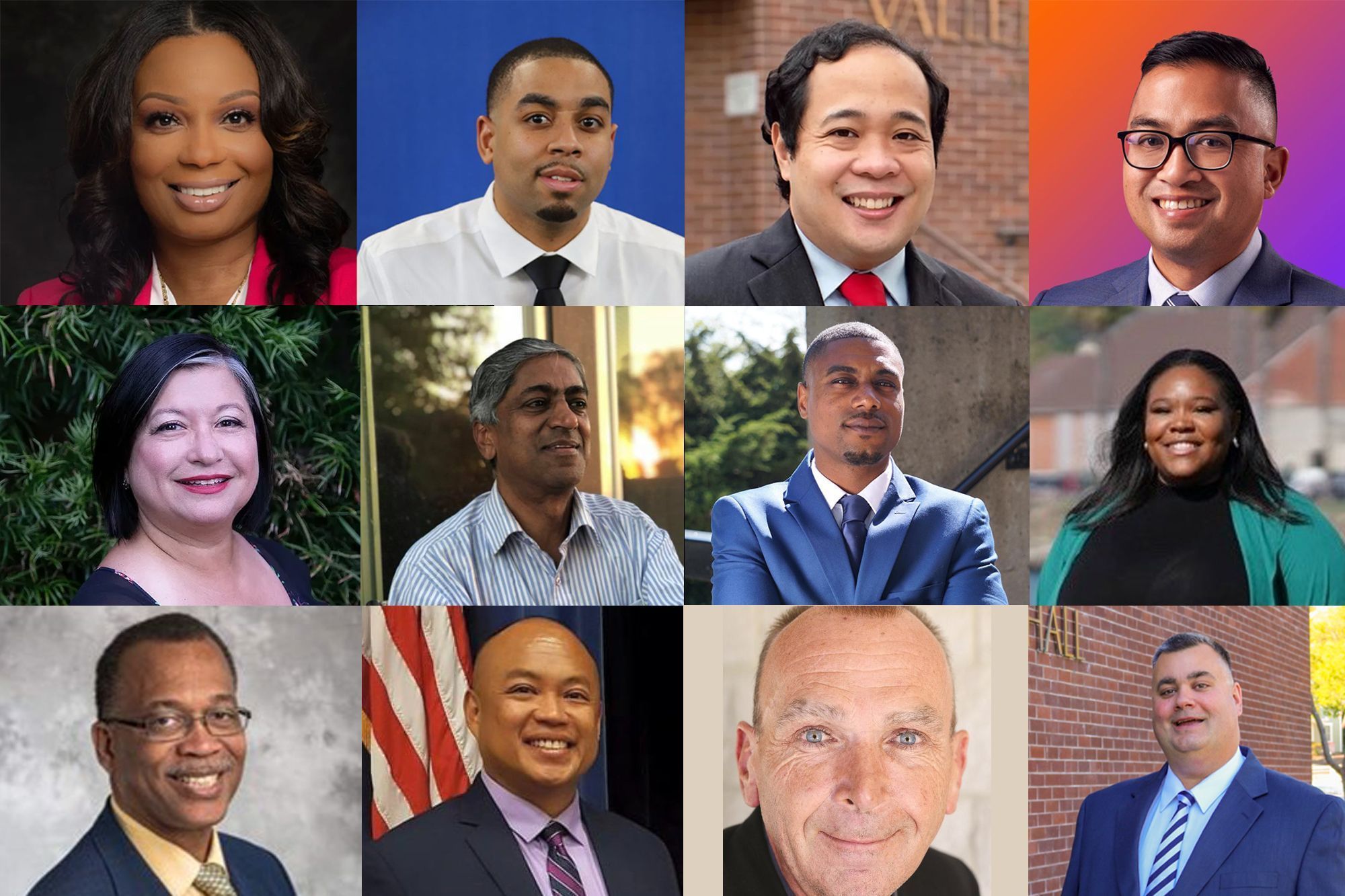 Candidates for Vallejo City Council in 2022.

If you still haven’t voted, or prefer to vote in person, you can read about how to vote in this election and find your local polling place here.

We’ve created the guide below to provide brief descriptions of all the candidates and measures on the ballot in Vallejo and Benicia to help you make up your mind. If you’d like to know more about any particular race, candidate or ballot measure, you can click on the links provided. You can also catch up on all of our previous election coverage in our Special Coverage section.

A Vallejo resident for 12 years, Cassandra James works as a senior community development specialist for the city of San Francisco. She is a current member of the Vallejo Housing and Community Development Commission and her campaign for city council has stressed increased accessibility to city hall and providing more access to housing and resources.

Don Jordan works as a realtor and has lived in Vallejo for 32 years. He has served on the city’s Human Relations Commission and the Civil Service Commission. His campaign has stressed improvements for streets and roads, including by paving and removing abandoned cars. Jordan also backs changing Vallejo's government by making the mayor the city’s CEO instead of a city manager.

Diosdado “JR” Matulac has lived in Vallejo since 1995 and works as an academic support provider for the Vallejo City Unified School District. He is a member of the Vallejo Planning Commission and has campaigned to improve economic development, public safety and city infrastructure, and has said that he wants to “improve the Vallejo narrative.”

Garrett Toles is an incident commander for a security and risk management consulting firm and has lived in Vallejo for five years. He was an organizer behind the “Potholegate Vigilantes” group that filled city potholes without permission.

Ruscal Cayangyang is a former Vallejo school board trustee and was a legislative aide for former Berkeley City Councilmember Cheryl Davila. In his campaign, he has emphasized funding road repairs by making the government more efficient, providing more homeless services and enhancing code enforcement.

Charles Palmares is a Vallejo Planning Commissioner and quality control inspector for manufacturing on Mare Island. In his campaign, he has advocated for improving the local economy by fully staffing the city’s planning, building and code enforcement departments to remove obstacles to new business and development.

Chris Platzer is a former Vallejo Planning Commissioner, a U.C. Coast Guard-licensed Deck Officer and sailing instructor. He has advocated for greater fiscal responsibility and improvements to infrastructure. In 2020, he resigned from the Planning Commission after he was seen drinking beer and threw his cat during a public Zoom meeting.

Ravi Shankar is an accounting and business consultant and longtime community advocate. He has participated in the city’s Participatory Budgeting committee and Sister Cities program, has been a member of the Vallejo Naval & Historical Museum board, the police Chief’s Advisory Board and the Solano County Library Foundation Board of Directors, and is involved with Vallejo’s community gardens.

Tara Beasley-Stansberry is a local businesswoman who co-owns Noonie’s Place restaurant.  She has lived in Vallejo for seven years, serves on the Community Housing & Development Commission, is co-chair on the Participatory Budgeting Steering Committee, and commissioner on the Design Review Board. Beasley-Stansberry says that “it is time to restore the trust of our residents,” through being transparent, inclusive and being a catalyst of change.

Melissa Bowman serves as district librarian for Vallejo City Unified School District, while also a member of the Vallejo Planning Commission. A resident since 2013, Bowman has highlighted the need for more affordable housing in the city and is pushing for residents to “claim” their streets. Bowman is an advocate for more traffic calming methods to ensure pedestrian safety, while also seeking to add more bike lanes and wider sidewalks.

Peter Bregenzer serves on the city’s Architectural Heritage & Landmarks Commission, and is the chief operating officer with Jurney Veterinary Neurology. Bregenzer advocates for the restructuring of the Vallejo Police Department to make the city “a safer place to live.” He also says he wants to address the number of vacant buildings in the city and proposes to make improvements to the city’s waterfront by developing a “plan to improve security, increase lighting along the waterfront and add benches, picnic tables and shade trees to make the space more usable for families.”

Tanya Hall is a college and career advisor for the Vallejo City Unified School District. The lifelong resident is advocating for investment in industry and establishing a foundation at 400 Mare Island Way “for Vallejo's Youth, which would expand outside of any existing curriculum emphasizing on STEM, Vocational Training, and Creative Expression.” Hall also serves on the Architectural Heritage Landmarks Commission.

Dwight Monroe Jr. is a local businessman, who owns Dwight's Mobile Brake Service LLC. The eight-year Vallejo resident serves on the city’s Economic Vitality Commission, while also serving on the Vallejo Naval and Historical Museum Board. Monroe is an advocate for more youth programming and economic development in the city. Monroe says getting the homeless navigation center up and running is a priority so the “city can provide the resources many of our unhoused community members need.”

The Vallejo school board trustee who is elected will represent Trustee Area 5, which encompasses Southeast Vallejo, including the Glen Cove neighborhood.

Ajit S. Bhandal is listed on the ballot as a naturopathic practitioner. On his campaign website, Bhandal touts his education while outlining his priorities, saying he will make the district “one of the best in the nation,” by ensuring there are no student dropouts, standardizing student-teacher ratios, putting an “emphasis on school discipline,” and ensuring an “efficient and functional management of Vallejo unified school system.”

John Fox is a 3rd grade teacher with the Mt. Diablo Unified School District. First elected to the Vallejo school board in 2018, Fox says he wants to continue the good work the board has been doing over recent years. Fox says the district needs to create “an emotional and physical safe learning environment at our school campuses, that reflect high expectations and concern for all students and staff.”

Tony Gross is a retired educator who served as the first principal of Jesse Bethel High School which opened in 1998. He was first elected to the Vallejo school board in 2018. Gross says maintaining the district’s financial stability is a top priority. He is also advocating to collaborate with district faculty and staff to develop “innovative learning systems,” to ensure that students have the tools to succeed academically.

In Vallejo, voters will decide on Measure P, a proposed seven-eighths-cent sales tax increase. City officials say the tax hike would generate $18 million annually for the city’s general fund and would be used  to address blight, illegal dumping, homelessness, roads, provide fire and police protection, and keep public spaces clean. If approved, it would make Vallejo's sales tax the highest in the county at 9.25%.

Measure P requires 50% plus one of Vallejo voters to pass.

The top two vote getters will be elected to the Benicia City Council for the next four years. Unlike Vallejo, Benicia does not have district-based elections and all five council seats are elected by the entire city.

Planning commissioner Kari Birdseye works as a strategic communications manager for the Natural Resources Defense Council. She previously ran for City Council in 2018, narrowly losing to Lionel Largaespada and Christina Strawbridge after her candidacy was opposed by oil manufacturer Valero.

William Innes is a retired teacher with the Vallejo City Unified School District. He joined the race late and has been sharply critical of the influence of Valero in the city’s elections. Innes said during a candidate forum that he planned to vote for Kari Birdseye and Terry Scott.

Lionel Largaespada is director of marketing and business development at F3 and Associates, which provides surveying and visualization services. He was elected to the Benicia City Council in 2018 with support from Valero and has diverged with his colleagues on the council on some key issues, including opposing the city’s proposed sales tax hike.

Terry Scott is a retired businessman who worked for 26 years as an executive at toy manufacturer Hasbro. He is the executive director and founding member of the nonprofit Benicia Community Foundation and is chair of the Benicia Arts and Culture Commission and the Public Art Committee. Scott has never held political office and previously ran for council in 2020.

Christina Strawbridge is running for a third term on the Benicia City Council. She was first elected in 2011, lost her first bid for reelection in 2016 but won again two years later. She has lived in Benicia since 1985 and owns a clothing store on First Street, Christina S. She has emphasized economic stability and affordable housing and disavowed Valero’s support of her campaign.

Measure R requires 50% plus one of Benicia voters to pass.

The Benicia City Council placed Measure K on the ballot to decide whether to extend the duration of an Urban Growth Boundary, which otherwise ends on Dec. 31, 2023.

The Urban Growth Boundary was first established by a ballot measure in November 2003 intended to prevent urban sprawl by forbidding the city from extending infrastructure into the hills north of the city, which are zoned for strictly agricultural uses.

The measure prohibited the city from providing basic municipal services including water, sewer, storm drainage, fire hydrants and other public facilities in those areas. It was originally passed for a period of 20 years and if Measure K passes, it will be extended for another 20 years.

Measure K requires 50% plus one of Benicia voters to pass.

Voters across Solano County will decide whether to raise the county's sales tax by one-eighth of a cent, generating an estimated $9 million per year. While the tax is a general tax that can be spent for any purpose, the ballot measure approved by the Solano County Board of Supervisors states that it will be used for projects aimed at improving wildfire preparedness and response.

The tax would raise an estimated $9 million each year. It would take effect on April 1, 2023.

Measure E requires 50% plus one of Solano County voters to pass.