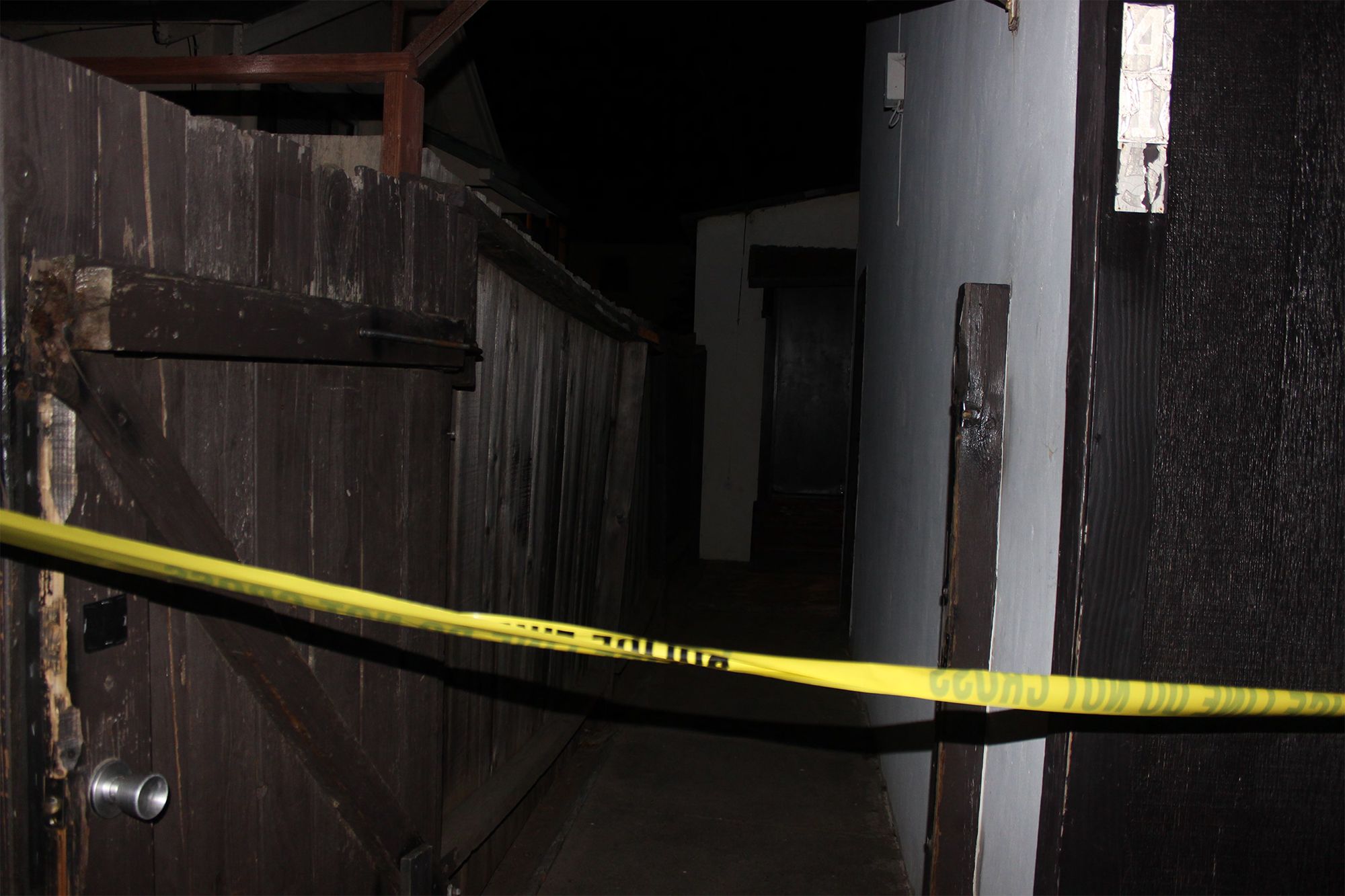 The backyard where Ronell Foster was shot and killed in 2018. Photo: Vallejo Police Department.

VALLEJO – After Vallejo police Officer Ryan McMahon chased, beat, Tased and shot Ronell Foster, killing him in 2018, different evaluations came to different conclusions about whether his actions were within department policy, with administrators contradicting the findings of internal reviews, according to newly released records.

In particular, those new records show that while then-Sgt. Sanjay Ramrakha cleared McMahon of any policy violations in the fatal shooting, both the department's deputy police chief and interim police chief who ordered the investigation disagreed.

By the time then-Deputy Chief Michael Kihmm disputed Ramrakha’s conclusions, McMahon had already been fired for his actions as one of six officers who shot and killed 20-year-old Willie McCoy the following year.

But it was not the first time Kihmm had found Ramrakha’s conclusions in internal affairs investigations to be too lenient.

Later, Kihmm would also be fired, for reasons he said were false and unfounded, while Ramrakha would be promoted to lieutenant and placed in charge of revising the department’s use of force policies.

The internal conflict over McMahon’s conduct shows disagreement between career  outsiders who had been hired to help steer the scandal-plagued department and longtime Vallejo police officers like Ramrakha as to what are acceptable police practices. McMahon’s conduct eventually led to the discovery of the department’s tradition of bending the tips of their badges to mark shootings, and he was terminated for jeopardizing another officer’s life.

Chief Shawny Williams did not respond to a request for comment.

McMahon, who joined Vallejo police in 2017, killed Foster on Feb. 13, 2018. Foster, 32, was riding a bicycle when McMahon tried to stop him for riding at night without a light. Foster fled, leaving the bicycle and running into a nearby backyard.

McMahon got out of his police car and chased Foster, cornering him in the backyard. He Tased him and hit him with his flashlight. Then, Foster managed to take the flashlight from him, and McMahon shot him seven times, including in the back and the back of the head.

According to recent court testimony, after McMahon killed Foster, Officer Zach Jacobsen — who had killed Angel Ramos in 2017 — bent the tip of McMahon’s star-shaped badge, inducting McMahon into a secretive clique within the department that had existed since 2003.

McMahon was one of six officers who shot and killed McCoy less than a year later, on Feb. 9, 2019. The officers fired 55 times into a silver Mercedes parked in a Taco Bell drive-thru where McCoy was unresponsive, allegedly with a gun on his lap. McMahon arrived just as officers began shooting and fired one round from behind Officer Bryan Glick.

Shortly after the McCoy shooting, the department became aware that McMahon had added a plate to his gun with the words “Veritas” and “Aequitas," Latin for “truth” and “justice,” a reference to the 1999 film Boondock Saints, where two brothers engage in vigilante justice by killing men they believe to be evil.

As the alterations to his gun were investigated, McMahon turned in his badge and then-Capt. John Whitney noticed two bent tips. McMahon told Whitney those bends “signified the two people he had killed in the line of duty,” according to a lawsuit later filed on behalf of Whitney.

Whitney took it to then-police Chief Andrew Bidou, who said that he would handle it.

The findings about McMahon, however, did not affect the department’s investigation into the Foster shooting. On March 5, 2019 — less than a month after Vallejo police killed McCoy — police Sgt. Jared Jacksch wrote a report that found McMahon acted within policy when he killed Foster and that he exercised sound tactics that were consistent with department training.

Bidou announced his retirement that same month, after the McCoy shooting made national news. Joe Allio — the former police chief of Fairfield — stepped in as interim chief. Allio moved to fire Whitney on Aug. 26, 2019. The following year, Whitney publicly revealed the badge bending tradition and sued the city for wrongful termination.

When Jacksch’s report on the Foster shooting was forwarded to Allio for approval, Allio disagreed, writing in an Oct. 21, 2019, memo that he found violations of the department’s pursuit and body camera policies. McMahon did not turn his camera on until after he killed Foster, but his body camera recorded the previous 30 seconds after being activated, which showed Foster turn away from McMahon before he was shot and killed.

“Officer McMahon failed to recognize his safety and the safety of the suspect [Ronell] Foster outweighed apprehension for a minor traffic/pedestrian violation,” Allio wrote. “Acting alone without a cover officer increased the danger to both McMahon and Foster.”

Williams was sworn in as police chief in November 2019. On Jan. 8, 2020, based on Allio’s memo, Williams ordered an internal investigation into McMahon’s conduct during the pursuit of Foster. The same month, the Solano County District Attorney’s Office cleared McMahon of criminal charges for the shooting.

Ramrakha, who was a sergeant in internal affairs at the time, handled that internal investigation. Ramrakha joined Vallejo police in 2002. He fatally shot Timoteo Diaz in 2004. During recent court testimony, former Lt. Kent Tribble testified that he started the badge bending tradition after he joined the department in 2003 and bent Ramrakha’s badge shortly after that.

Ramrakha also wrote a report which cleared Jacobsen for shooting Ramos and a report that found issues with tactics and decision making in the McCoy shooting, but did not identify any policy violations.

On July 29, 2020, Ramrakha submitted his internal investigation into McMahon’s shooting of Foster. For the investigation, he re-interviewed McMahon, who told him he wanted to stop Foster because he was concerned for his safety.

“Vallejo had had a large amount of pedestrian versus vehicle fatalities, and with the erratic movements from Mr. Foster, and not having a bike light, he was hard to see at nighttime,” McMahon told Ramrakha, according to the report. “So I thought it was a safety violation for not only himself, but also the moving public.”

Ramrakha asked McMahon several questions relating to whether he lost control of his faculties because of stress factors, including whether he was “overwhelmed,” or experiencing “tunnel vision.” McMahon denied this, but Ramrakha still characterized him as “task saturated,” arguing that was why he did not communicate his pursuit to dispatchers nor turn on his body camera.

“There is insufficient evidence to support a finding that Officer McMahon failed to consider all relevant factors outlined in the foot pursuit policy constituting a clear violation of the guidelines,” Ramrakha wrote.

In September 2020, Vallejo agreed to pay $5.7 million to Foster’s family to settle a civil rights lawsuit, the largest in the city’s history.

On Oct. 1, 2020, Williams fired McMahon for his conduct during the McCoy shooting. An internal investigation also ordered by Allio and conducted by Ramrakha cleared McMahon of unreasonable force when he shot McCoy but sustained violations of unsafe firearm handling and violations of safe weapons handling because he fired from behind another officer.

Ramrakha’s investigation into the Foster shooting was reviewed by Kihmm, the deputy police chief recruited by Williams from San Jose in November 2020. On March 18, 2021, Kihmm wrote a memo to Williams that said he disagreed with Ramrakha’s conclusion in the internal investigation and agreed with Allio that McMahon had violated department’s pursuit and body camera policies. McMahon faced no discipline because he was already terminated.

Two days prior, Kihmm had also disagreed with Ramrakha’s conclusion in an internal affairs case involving Colin Eaton, another officer who shot McCoy. During a 2019 arrest, Eaton pinned a man’s head down with his boot for over a minute while he was already restrained.

Ramrakha submitted his internal investigation into Eaton’s conduct on Oct. 8, 2020. He found that Eaton violated policies regarding discourteous and disrespectful treatment, as well as profane language for when Eaton approached the man saying, “I will fuck you up.” But he did not consider Eaton stepping on the man’s head to be a use of force.

Kihmm’s March 16, 2021, memo found that Eaton’s actions were a use of force as he was restraining the man and that such techniques are not taught by Vallejo police nor within policy. Williams suspended Eaton for 80 hours.

Kihmm, however, would not last long in the department. He was fired in October, less than a year after he was recruited. Records obtained by the Sun show that Williams fired Kihmm allegedly because the exit interviews he was conducting with departing officers were interfering with interviews by the city’s human resources department and because Williams alleged that Kihmm had failed to alert him to a personnel matter in a timely manner. Kihmm disputed both reasons.

Ramrakha, meanwhile, was promoted to lieutenant and is now heading the department’s revision of its use of force policies. He is also vice president of the Vallejo Police Officers Association, the union representing most Vallejo police officers except for the chief and a few command staff.

In a video released earlier this year, Ramrakha explained his role as the department’s subject matter expert in force options, tactics and de-escalation.

“The proposed changes expanded the depth and breadth of the policy, adding layers of review, greater accountability and redefining force in some instances,” Ramrakha said. “Policy centers around departmental values which include the sanctity of life, harm reduction, de-escalation, and accountability.”