Vallejo police gathering feedback on new use of force policy

The new policy would prohibit officers from shooting at moving vehicles and adds guidance for dealing with armed but unresponsive people.
Share this news on: 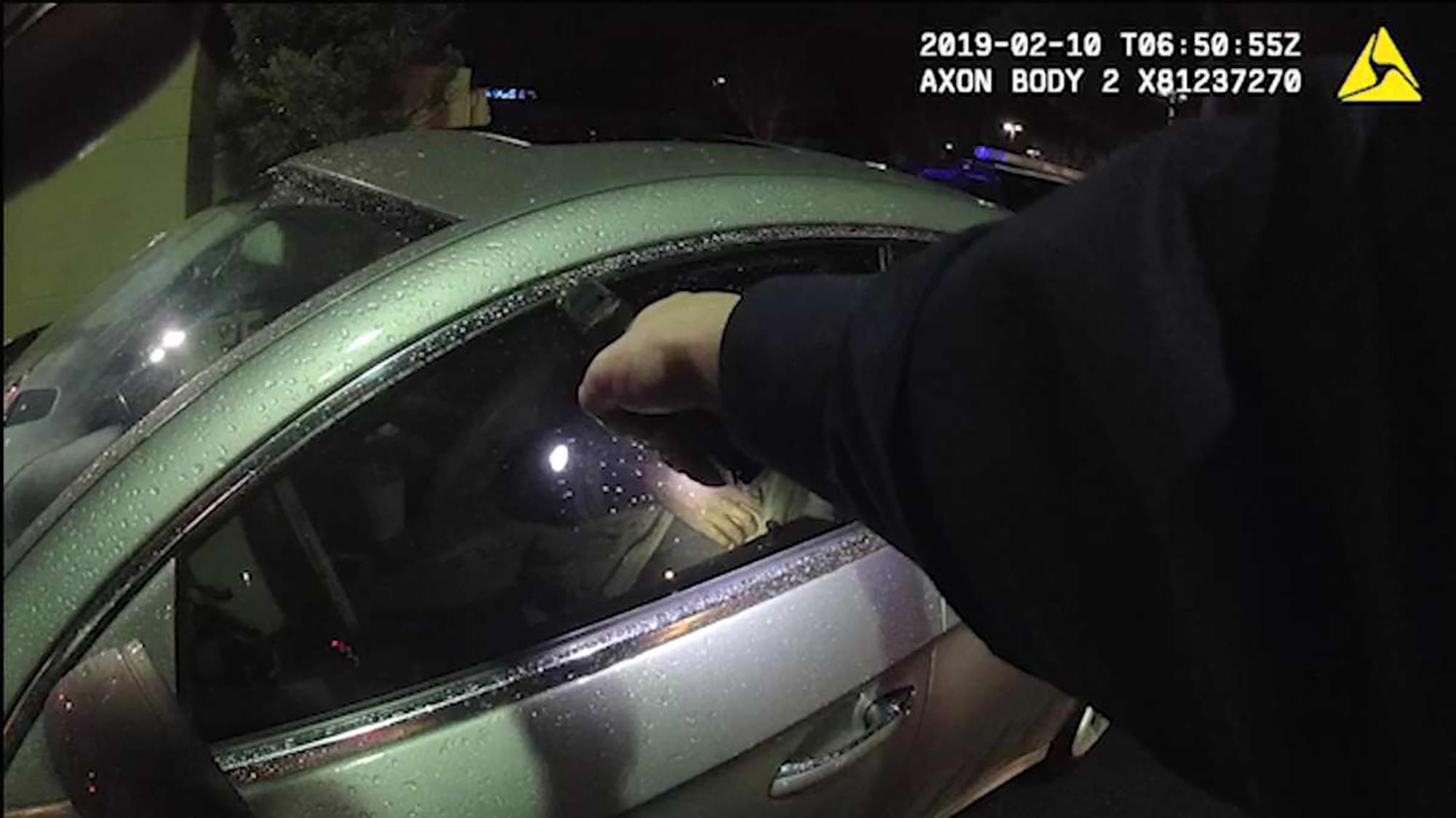 A Vallejo police officer points his gun at Willie McCoy in 2019. Policies for dealing with armed and unresponsive subjects would be revised under proposed new Vallejo police policies.

VALLEJO – The Vallejo Police Department will hold a town hall meeting on Wednesday to receive community feedback on a new use of force policy drafted by the department over the last several months.

Vallejo police published the draft policy last month and announced it would solicit feedback on the policy until March 14, including during Wednesday’s virtual town hall.

The department’s current policy manual is largely adapted from policies by Lexipol, a for-profit company that drafts policies to license to law enforcement agencies. Critics have said that Lexipol policies are often too vague with the aim of greater permissiveness in order to protect agencies from lawsuits.

But Vallejo police have made adjustments to the use of force policy over the last two years, including adding a section on de-escalation and banning the use of carotid restraints, which are similar to chokeholds, in response to a ban passed by the state legislature in 2020. The new policy would go further, prohibiting officers from shooting at moving vehicles and adding guidance for dealing with armed but unresponsive people.

The revisions only cover a portion of the department’s use of force policy and not sections dealing with the use of Tasers, batons, OC spray and other uses of force that aren’t firearms. Deputy Chief Jason Ta and Lt. Sanjay Ramrakha, the department’s subject matter expert in force options, tactics and de-escalation, did not respond to questions about whether those policies would be revised as well.

One major change from the current policy is that officers will be prohibited from shooting at or from moving vehicles. The previous policy, which was drafted by Lexipol, states:

Shots fired at or from a moving vehicle are rarely effective and may involve additional considerations and risks. When feasible, officers should take reasonable steps to move out of the path of an approaching vehicle instead of discharging their firearm at the vehicle or any of its occupants.

Expands on officers’ duty to de-escalate

The draft Vallejo police policy manual would create stricter standards requiring officers to de-escalate a situation prior to using force. The department first added a de-escalation policy in early 2020, which stated:

It is the policy of this Department that when all of the known circumstances indicate that it is reasonably safe, prudent and feasible to do so, an officer(s) shall attempt to slow down, reduce the intensity or stabilize the situation through de-escalation so that more time, options and/or resources may become immediately available for incident resolution.

Months after that policy was enacted, on June 2, 2020, Vallejo police Det. Jarrett Tonn fired through the windshield of a moving pickup truck and killed Sean Monterrosa. Tonn, as well as the truck’s driver, Det. Bretton Wagoner, its passenger, Det. Wesley Pittman, and their commander, Capt. Lee Horton, were each found to have violated this policy by failing to consider other options and create time and distance before entering a volatile situation.

Officers have an affirmative duty whenever feasible to attempt to slow down, reduce the intensity of or stabilize any situation through de-escalation. Officers are required to use de-escalation techniques, crisis intervention tactics, or other alternatives to the use of force when feasible. The goal of de-escalation is to gain the voluntary compliance of subjects, when feasible, and thereby reduce or eliminate the necessity to use physical force.

New requirements for dealing with armed and unresponsive subjects

For the first time, the department will add a policy for dealing with armed and unresponsive subjects. Had this policy been enacted in 2019, the shooting of Willie McCoy could have gone very differently. McCoy was killed when six Vallejo police officers fired 55 times after he was found unresponsive in his car in a Taco Bell drive-thru allegedly with a gun on his lap.

The officers involved in the McCoy shooting were all cleared of any department policy violation except for Officer Ryan McMahon, who was fired for shooting from behind another officer. But the new policy would require officers to use de-escalation to safely resolve the situation.

Officers may encounter unresponsive persons in possession of or with nearby access to firearms or other weapons. As with any public encounter, officers should be aware of whether there is a risk to the safety of the public, officers, and the person.

A supervisor will be requested and dispatched to the location as time and resources reasonably permit and will assume control and planning for any engagement.

Drawing a firearm will be a reportable use of force.

The new policy would require Vallejo police officers to report any time they draw and point a firearm as a use of force incident. This is a change from the previous policy, which states:

Given that individuals might perceive the display of a firearm as a potential application of force, officers should carefully evaluate each tactical situation and use sound discretion when drawing a firearm in public.

Officers shall not exhibit a firearm unless the circumstances of the incident lead the officer to reasonably believe that it may be necessary to use deadly force. A firearm will not be directed toward an individual unless the officer believes the use of deadly force is reasonable and necessary. Any pointing of a firearm at a person is a reportable use of force.

The draft policy would require the department to create a quarterly review of use of force incidents that will be posted publicly on the department website. This is a change from the previous policy, which said the department “should” prepare an annual analysis. The word “should” means that it was a suggestion, not obligatory like “shall.”

At least annually, the Professional Standards Division should prepare an analysis report on use of force incidents. The report should be submitted to the Chief of Police. The report should not contain the names of officers, suspects or case numbers, and should include the identification of any trends in the use of force by members.

The Administrative Deputy Chief shall be tasked with ensuring quarterly review of use of force incidents to provide information for review by VPD command and supervisors to generate awareness of trends, issues, and actions of VPD members in the use of force. These reports will be made available to the public in standardized reporting formats using the VPD website.

This report will include demographic data, incident data, and the status and outcomes of the internal investigations.

Lack of specifics for less deadly uses of force

The current draft policy makes no changes to substantial aspects of the overall Vallejo police use of force policies, including sections regarding uses of batons, Tasers, OC spray and other uses of force.

Some of these policies have not been altered from the language provided by Lexipol, which is less stringent than other departments, like San Francisco Police Department’s General Order 5.01.

The need to immediately control a suspect must be weighed against the risk of causing serious injury. The head, neck, throat, spine, heart, kidneys and groin should not be intentionally targeted except when the officer reasonably believes the suspect poses an imminent threat of serious bodily injury or death to the officer or others.

The policy indicates that officers “should” not target vital areas, but does not prohibit it. While the San Francisco policy states:

Unless exigent circumstances exist, officers shall not intentionally strike vital areas, including the head, neck, face, throat, spine, groin or kidney. The use of an impact weapon to a vital area has a likelihood of causing serious bodily injury or death, and the intentional use of an impact weapon to these areas shall only be used in situations where lethal force is justified.

Another policy unchanged from Lexipol involves the use of “kinetic energy projectiles,” which includes beanbags and other less-lethal munitions that can be fired from a distance. The current Vallejo police policy states that these munitions can be used in the following circumstances:

Circumstances appropriate for deployment include, but are not limited to, situations in which:

(a) The suspect is armed with a weapon and the tactical circumstances allow for the safe application of approved munitions.

(b) The suspect has made credible threats to harm him/herself or others.

(c) The suspect is engaged in riotous behavior or is throwing rocks, bottles or other dangerous projectiles at people and/or officers.

(d) There is probable cause to believe that the suspect has already committed a crime of violence and is refusing to comply with lawful orders.

However the San Francisco police policy prohibits using such weapons on people armed with a firearm:

The ERIW (Extended Range Impact Weapon) may be used on a subject who is armed with a weapon, other than a firearm, that could cause serious injury or death. This includes, but is not limited to, edged weapons and improvised weapons such as baseball bats, bricks, bottles, or other objects. The ERIW may also be used in accordance with Department training to subdue an aggressive, unarmed subject who poses an immediate threat of serious injury to another person or the officer.

John Crew, the retired American Civil Liberties Union Northern California director of police practices, said it was important for officers not to use such weapons on people armed with firearms because it could needlessly escalate the situation to deadly force.

“SFPD... recognize the reality that those projectiles are very unlikely to disarm the subject, making the subject more dangerous if they're still holding a gun,” Crew said in an email. “The involuntary body movements that can result from being struck with those are very likely to be misinterpreted as an intent to fire, leading to officers' quick, instantaneous escalation to deadly force.”

Crew said it was important for the department to recognize use of force as a continuum. “You're not serious about ‘de-escalation’ if you're not contextualizing that mandate and all other forms of force right up to shootings in relationship to one another with specific standards, requirements, controls, etc. for each,” he said.

However, the policies are only as effective as their enforcement. Recently released internal files show that when Vallejo police Officer Colin Eaton – one of the six who shot Willie McCoy – stepped on a man’s head as he was restrained, Ramrakha – the department’s use of force options expert – did not find that Eaton violated the use of force policy. Later, when Deputy Chief Michael Kihmm reviewed the case, he sustained a use of force policy violation and Eaton was suspended for 80 hours. Kihmm was later fired for unknown reasons.

The town hall meeting will be held online via Zoom Feb. 23 at 6 p.m. Participants are asked to register in advance via this link.