Officer Colin Eaton was suspended for 80 hours the following year for pinning a man’s head down with his boot for nearly a minute
Share this news on: 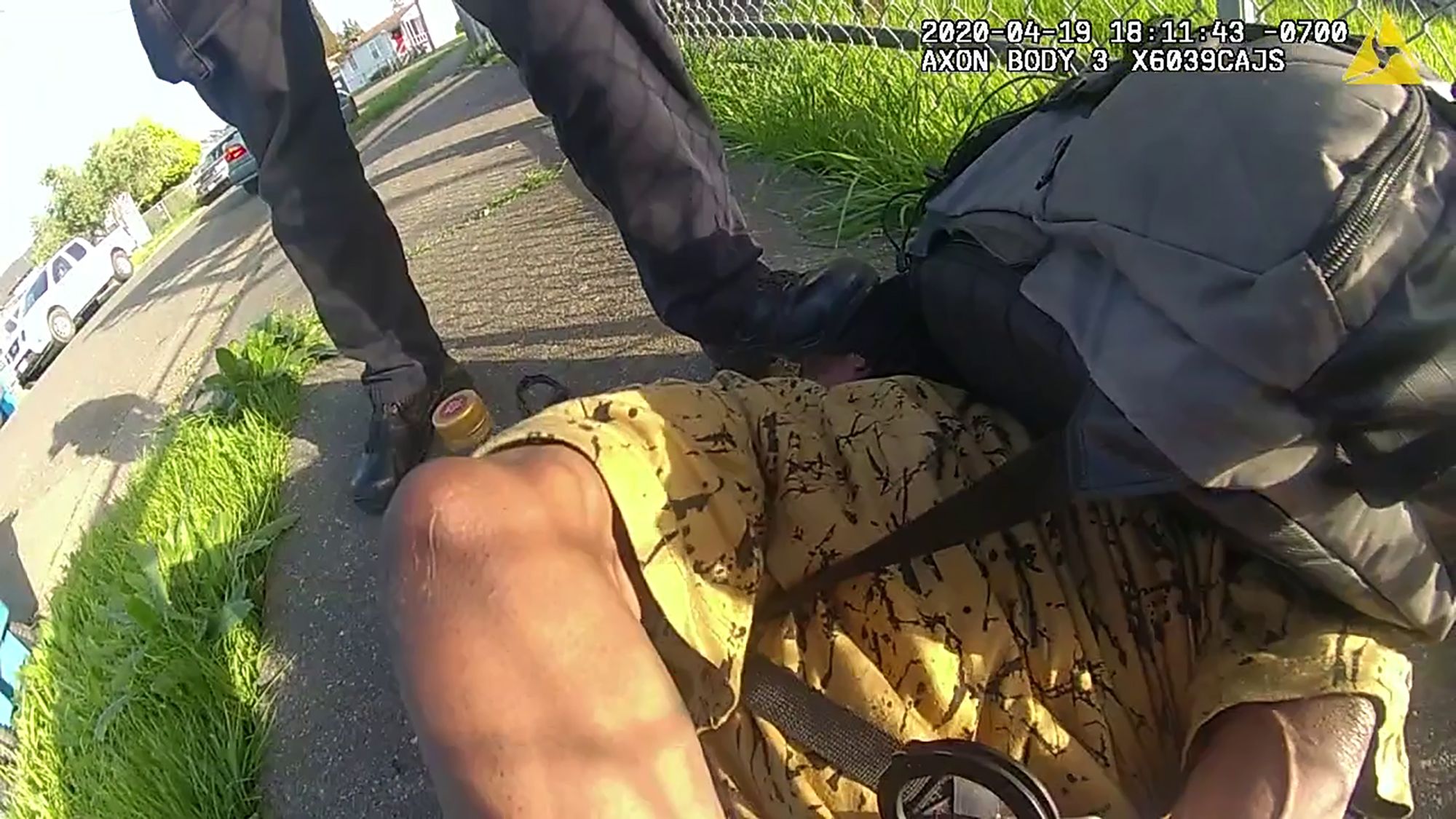 VALLEJO – One of the six Vallejo police officers who shot and killed Willie McCoy in 2019 was suspended for 80 hours the following year for pinning a man’s head down with his boot for nearly a minute while he was already restrained  as another officer searched him.

An initial internal investigation only found that Eaton violated the department’s policies on discourteous and disrespectful treatment as well as profane language for when Eaton approached the man saying, “I will fuck you up.” Sgt. Sanjay Ramrakha concluded that “there are better ways to address subjects,” but found that Eaton’s use of force was objectively reasonable when he hit the man with a baton once in the leg.

Ramrakha did not, however, find that Eaton violated the use of force policy for putting his boot on the man’s head. Instead, then-Deputy Chief Michael Kihmm made that determination after he reviewed the case. Kihmm was himself fired for unknown reasons last year.

Police Chief Shawny Williams proposed that Eaton be suspended for 80 hours. But following a hearing for officers facing discipline, the hearing officer found that it may have been insufficient, but deferred to Williams’ judgment.

Eaton has been a Vallejo police officer since 2017. Prior to that, he spent 8 years in the U.S. Marine Corps. In 2019, he fired 13 of the 55 bullets fired into McCoy’s silver Mercedes on Feb. 9, 2019, more than any other officer. Eaton was not disciplined for that incident and only one of the six officers who fired was: Officer Ryan McMahon, who fired a single round from behind another officer.

The arrest that led to Eaton’s suspension happened on April 19, 2020, when Eaton responded to a call of a man exposing himself on 13th Street near Madigan Street. As officers arrived, the man had his pants halfway down.

According to the officers, the suspect then complied, but Eaton put his foot on the man’s head “to prevent him from moving about and resisting further.”

The officers then searched the man for drugs, believing he was under the influence because he had dilated pupils, showed involuntary movement of his limbs and was grinding his teeth. They found a white powdery substance inside a rolled up one-dollar bill.

The other officer told investigators that she didn’t see Eaton do anything she would have considered unprofessional.

Eaton told investigators that when they called out to contact the man he believed he was “about to enter fight or flight,” but acknowledged he didn’t see the man had balled his fists or had taken a fighting stance, so he “felt like he was more apt to run versus fight.”

“I did not want to chase this guy over fences or through yards and create a situation that would be extended, so I wanted to close the distance and engage him before he had a chance to do that,” Eaton said. He told the man “I will fuck you up,” because he thought it “sometimes gets results out of people that don’t always respond well or well enough to polite directions.”

When asked why he put his foot on the man’s head, Eaton said that as the other officer searched him, “he was still squirming around.”

“I was uncomfortable that she was that close to him on his upper half. He did not appear to be the most clean… person that I’ve encountered and there was a lot of spittle and other bodily fluids near his face, so I wanted to control his head,” Eaton said, “so I placed the front tip of my left boot on the back of his head when he was facing away from me.”

Eaton said he did not consider other options, such as putting his knee on the man’s shoulder or holstering his baton and putting gloves on to assist the other officer.

Following a Skelly hearing – a mandatory hearing for an officer facing discipline – Skelly officer Marc Fox wrote that he “struggled a bit as to the appropriate recommended disciplinary action.”

The files from the investigation were released under SB 16 which releases records of police officers who were found to have engaged in biased or discriminatory behavior, used excessive or unreasonable force, and or conducted unlawful searches and/or arrests. It builds on 2018's SB 1421 which lifted a veil on police misconduct records.