The elections for Solano County Sheriff and district attorney will select the two most powerful positions in the county’s criminal legal system for the next four years.
Share this news on: 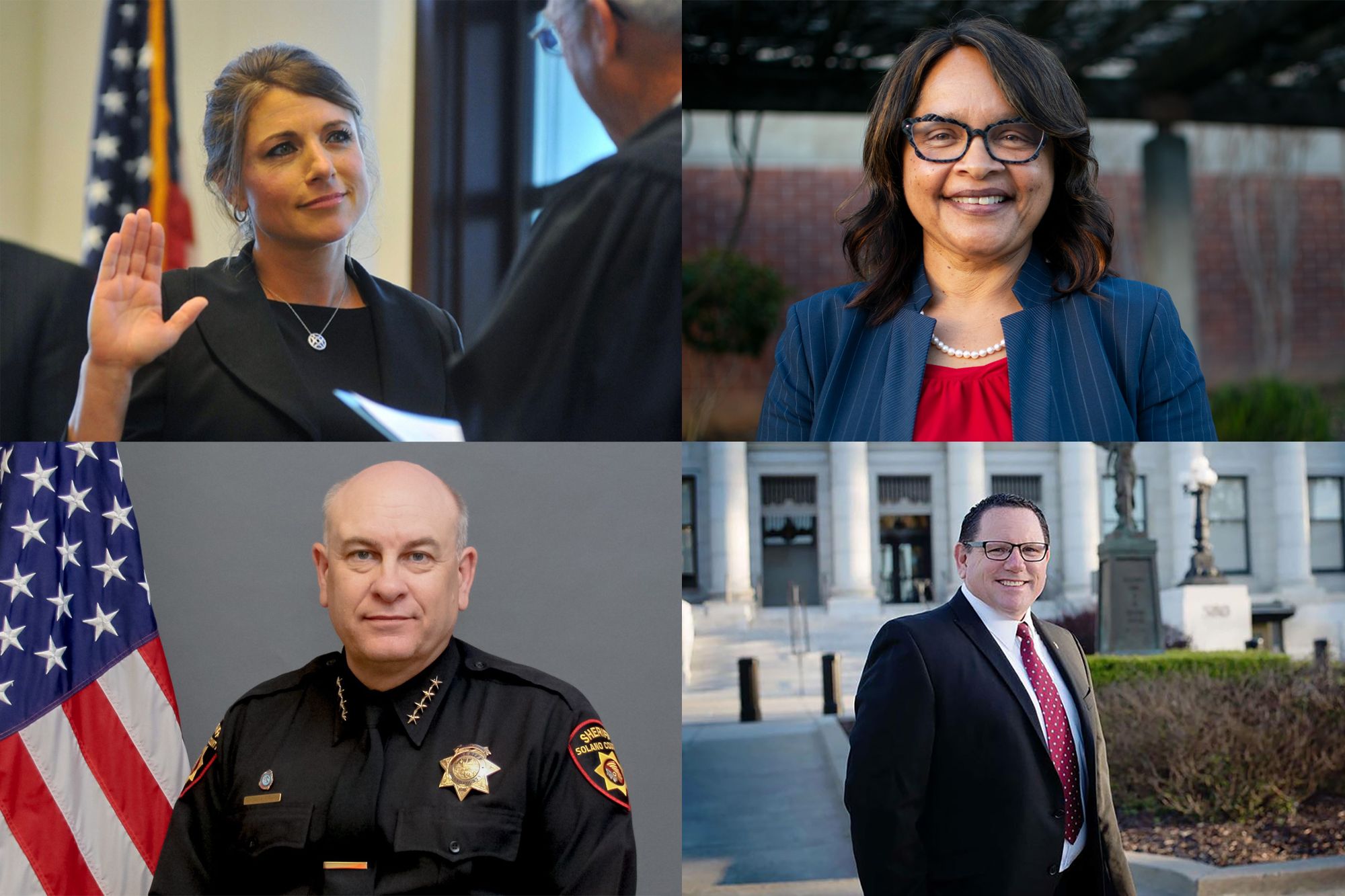 A statewide primary election will be held June 7, which includes deciding who will be on the ballot for the national midterms in November, but there are also some important races in Solano County.

Of note, the elections for Solano County Sheriff and district attorney will select the two most powerful positions in the county’s criminal legal system for the next four years.

Ballots for the election were mailed to all eligible voters in the county last week and must be postmarked by June 7 in order to be counted.

According to the county, more than 90% of voters in Solano County choose to return their ballot either by mail or at a drop-off location rather than voting in person.

We’ve created this guide of the most important local elections and a brief description of each candidate running to help you make an informed choice next month.

Abrams has been widely criticized for her handling of police shooting investigations and Henry has also accused Abrams of running a dysfunctional office where prosecutors and victims’ rights are not respected.

Krishna Abrams was first elected over the previous DA, Donald du Bain, in 2014. She was the first woman to be elected district attorney in Solano County and did not face an opponent when she was reelected in 2018.

Abrams started her law career in 1995 in the Solano County Public Defender’s Office, and then worked in the Tulare County DA’s office for about four years – where she first met opponent Sharon Henry. Abrams returned to Solano County, this time to work in the DA’s office, where she has worked for the last 22 years.

But Abrams was widely criticized when she recused her office from two high-profile Vallejo police killings: Willie McCoy in 2019 and Sean Monterrosa in 2020, citing a lack of trust for her office.

Abrams eventually appointed a special prosecutor to evaluate the shooting of McCoy. State Attorney General Rob Bonta agreed to review the Monterrosa case shortly after he was appointed to the position last year. In doing so, he criticized Abrams, citing “the failure of the District Attorney to fulfill this important responsibility.” The review of the Monterrosa case is ongoing.

Sharon Henry has been a prosecutor for her entire career. She worked in Tulare County DA’s office for nearly 15 years before she joined the San Mateo County DA’s office, where she worked for another almost 12 years. In 2014, when Abrams was elected Solano DA, she recruited Henry to join her office.

Over the next seven years, the relationship between Abrams and Henry deteriorated. Henry sued the county in August, alleging that when the COVID-19 pandemic hit, Abrams retaliated against her for working remotely because of her age and her medical history, which put her at higher risk of severe complications from COVID. Henry has alleged that it’s part of a larger practice of favoritism and dysfunction in Abrams’ office.

Henry has also been critical of Abrams’ decision to recuse herself from the McCoy and Monterrosa shootings.

“It's our responsibility to review those cases and determine whether the officer was justified in that conduct and that action,” Henry said in an interview with the Vallejo Sun in February. “I disagree with trying to turn those cases over to another agency, because I feel that there was absolutely no conflict in making those decisions.”

The sheriff is the most powerful law enforcement official in the county. The Solano County Sheriff’s Office employs 512 people, including 170 sworn deputies, runs the county’s jails and provides policing services for unincorporated areas of the county. It also contracts with some jurisdictions to provide policing services, such as the city of Rio Vista. In this election, incumbent Tom Ferrara is facing a challenge from retired Deputy Daryl Snedeker.

Tom Ferrara was appointed sheriff in 2012 after his predecessor retired. He won his first election unopposed in 2014 and fended off challenges from sheriff’s Deputy Daryl Snedeker and Fairfield police Lt. Dan Marshall in 2018.

While Ferrara received more than half the vote in 2018, he had a difficult 2021. Early in the year, an investigative report revealed that multiple deputies had displayed Three Percenter symbols on their personal social media pages.

Federal prosecutors have said that Three Percenters are a group with extreme anti-government, pro-gun beliefs. Ferrara defended the deputies and refused to investigate the incident.

Then in August, Ferrara’s office was sued by Nakia Porter, who alleged that sheriff’s deputies dragged her from her car and beat her unconscious after she had pulled over to switch drivers near Dixon. Ferrara defended the deputies, saying that Porter had slipped her wrist out of her handcuffs and struck Deputy Dalton McCampbell, though no video shows this.

Following the incident with Porter, the Solano County Board of Supervisors had a meeting to consider creating an oversight board that could investigate the sheriff’s office, but declined to do so.

Daryl Snedeker recently retired after more than 20 years in the sheriff’s office, including serving as its public information officer from 2011-2014.

He said in an interview with the Vallejo Sun that as a deputy, he earned the nickname “preacher” due to his efforts to help people he arrested by referring them to mental health and addiction recovery resources, including carrying pamphlets in his patrol car.

"I first-hand understand that people can change and they do change,” Snedeker said, referring to a family member who he said has been sober for more than a decade. “They have to be put in the right situation at the right time of life and have the resources available to them in order to change.”

Snedeker said that while he was in the sheriff’s office, he witnessed a lack of accountability and transparency under the current administration, where discipline was not consistently applied and rewards were not necessarily based on who was most deserving.

Snedeker said that he thinks that the sheriff’s office, which operates the county jail, could be doing much more to help people in its custody connect with resources so that they can make better choices in the future.

Solano County Board of Supervisors - District 3

Two Solano County Board of Supervisors seats are up for election June 7.

In the District 4 race, Supervisor John Vasquez is running unopposed.

In District 3, which includes portions of Suisun City and a large portion of Fairfield, incumbent Jim Spering – the former Suisun City mayor who has been on the Board of Supervisors since 2006 – has decided not to seek reelection, leaving a wide open race to succeed him.

Five candidates are running for the seat. If none of them wins a majority – defined as 50% of the vote plus one – then the two candidates with the most votes would proceed to a runoff election in November.

Joseph Joyce was a law enforcement officer for 19 years in the 1980s and 90s, including working in the Solano County Sheriff’s Office as a correctional officer for four years, in the Emeryville Police Department for six years, and a brief stint in the Vallejo Police Department. According to the Daily Republic, his time in Vallejo was brief because of “chaos” in the department. He moved on to the Twin Cities police in Marin County and retired because of an injury.

After he retired, he became a salesman for law enforcement equipment and currently is a sales manager for LETS, a Walnut Creek-based firm that develops law enforcement technology, such as phone apps for drones, evidence photos and recording. Joyce, who has no experience in elected office or government, is running as an outsider and not a “career politician with ties to donors.”

Suisun City Councilmember Wanda Williams was first elected to the council in 2018. Prior to that, she volunteered as a parent representative to the Community Advisory Committee of the Fairfield-Suisun Unified School District, where she advocated for more investment for students with special needs, drawing on her experience as a parent of children with disabilities, according to her campaign website.

Williams was later appointed to the Suisun City Measure S Oversight Committee, a committee created to provide transparency and oversight for a 1% sales tax for general use that was enacted by a 2016 ballot initiative. In that role, Williams reviewed audits and helped oversee spending on 911 response, policing, gang interventions, fire prevention and maintaining parks and roads, according to her campaign.

Jennifer Barton, a political consultant, has not held elected office before but has a long career in politics and government. According to her LinkedIn profile, she was district director for U.S. Rep. Ellen Tauscher for six years and later worked in the office of state Assemblymember Jim Frazier, where she worked for seven years, including three years as chief of staff.

She has lived in the county for 30 years and also volunteers helping young women through service and scholarship programs, according to her campaign.

Solano Irrigation District Director Pete Sanchez was a Suisun City Councilmember for three terms and then was elected mayor in 2006 after then-Mayor Jim Spering ran for supervisor. He was defeated for reelection in 2018 by Lori Wilson, who is running for state assembly.

Sanchez told the Vacaville Reporter that his campaign emphasizes his accounting background.

“I have no problem looking at budgets and tweaking them to better serve the community,” he said. “I’ve been a certified public accountant for more than 40 years. My background is in sales tax examination and bank examination and accounting.”

Chuck Timm is a Fairfield city councilmember and former Fairfield police officer. According to the city’s website, he is the son of a retired U.S. Air Force colonel and moved around a lot as a child, but spent his senior year of high school in Fairfield when his father was stationed at Travis Air Force Base.

Timm joined Fairfield police in 1973 and worked there for 31 years before he retired in 2004.

He was first elected to the Fairfield City Council in 2007 but lost when he ran for reelection four years later. He ran again in 2014, won one of two seats up for election that year, coming in second with 15% of the vote. He was reelected in 2018, again coming in second place with 28% of the vote.