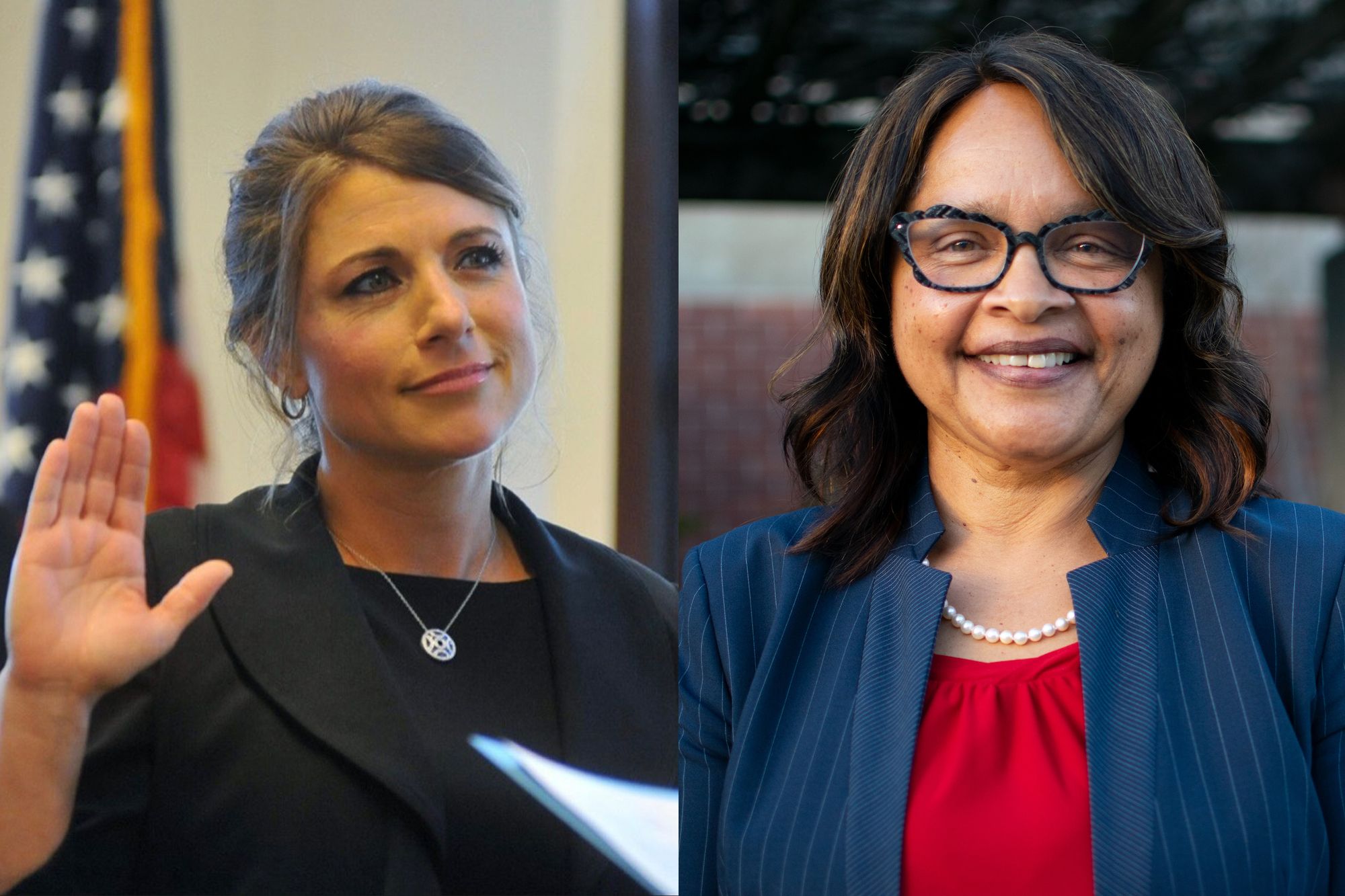 FAIRFIELD – A month ahead of the election, the two candidates for Solano County District Attorney for the first time debated in real time in a virtual forum Tuesday afternoon hosted by the American Civil Liberties Union and Solano Community College, taking on issues such as police accountability, juvenile prosecutions and race in jury selection.

The candidates know each other well, as Chief Deputy District Attorney Sharon Henry is challenging her boss, District Attorney Krishna Abrams. The forum was co-hosted by Benicia Black Lives Matter and moderated by its co-founder, Brandon Greene.

Abrams recruited Henry to work in her office shortly after she won election in 2014, but since then Henry has challenged Abrams’ leadership. She sued the county last year, alleging Abrams discriminated and retaliated against her before announcing  her candidacy for DA in February.

Abrams said during Thursday’s forum that she first ran for DA “to restore the public trust in the DA’s office.

“I feel like I've done that and more,” she said. “We've had so many accomplishments in the last eight years.”

But, in what has become a key issue in the campaign, Abrams recused herself from investigating two fatal shootings by the Vallejo Police Department: that of Willie McCoy in 2019 and Sean Monterrosa in 2020, citing a lack of community trust in her office.

“While I remain confident that my office can conduct a fair and thorough review of officer-involved shootings and that we will continue to do so, the current circumstances compel an outside review to not only restore public trust, preserve the safety of our community, but also provide confidence in the outcome,” Abrams said in a video announcing her decision in 2020.

Abrams’ office had tried to turn the investigations over to then-Attorney General Xavier Becerra’s office, but it declined to take up the investigation, saying they were Abrams’ office's responsibility. Abrams later recruited former San Bernardino County DA Michael Ramos to review the McCoy shooting, who cleared the officers of any criminal charges. Under Attorney General Rob Bonta, the Department of Justice agreed to review the Monterrosa shooting, though in doing so said that Abrams had abdicated her responsibility.

While Henry did not name those two incidents explicitly, she said during her closing statement Tuesday that the DA’s office should not be “beholden to one particular side.” While she said she works with law enforcement and respects good policing, Henry said, “when officers engage in activity that breaks the law, the DA needs to be independent enough, courageous enough, to hold people accountable.”

Abrams and Henry also debated the Vallejo police tradition of bending the tips of their star-shaped badges following an on-duty shooting, which was corroborated when several officers admitted to it during testimony in a recent hearing in criminal court. But Abrams continued to cast doubt whether or not it had even happened.

“If that were in fact the case, that would horrify me,” she said. Abrams said that there was an investigation completed by the city of Vallejo and “the report did not verify the allegations that were alleged in the newspapers.”

The investigation was conducted by former Sonoma County Sheriff Rob Giordano and the city has refused to make his report public. However, the DA’s office confirmed in court that it had received the report, as portions of it could be used to impugn some officers’ testimonies.

The testimony, as well as comments from Solano County Judge Daniel J. Healy,  made it clear that badge-bending did occur within the Vallejo Police Department, though  some officers characterized themselves as “victims” because  their badges were bent against their will.

The report was provided to the DA’s office for the so-called “Brady List,” named for the plaintiff in the U.S. Supreme Court decision in Brady v. Maryland, which found that law enforcement agencies and prosecutors have an obligation to provide defense attorneys with police personnel records if they might aid in a person’s defense, such as if officers had lied under oath.

The list of officers whose testimony could be impugned is typically kept secret in California, and Abrams said she would keep it that way. Henry, however, said that she thought it should be made public.

“The list is not a work product document and I believe that such a list could be made public and that's one of the things that I would do is to make that public,” Henry said. “I believe the public has a right to know. In Solano County right now, there has to be some movement to make the public trust the office of the DA.”

Henry also addressed reports that some members of the Solano County Sheriff’s Office had displayed support for the extremist group the Three Percenters. Henry said that any involvement in extremism “goes to the heart of credibility.” While such involvement likely wouldn’t rise to the level of criminal prosecution, Henry said that the DA’s office should take a close look at any criminal prosecutions where those officers played a role.

Aside from potentially charging an officer who was engaged in criminal misconduct, DA’s offices do not play a direct role in police oversight. Still, Henry said, agencies should welcome any greater oversight and transparency.

“There is a need for certain agencies to have a citizen oversight committee,” Henry said. “I'm always amazed by agencies that don't want to do that, because it's all about public service and transparency.”

Abrams, however, said that there is no need for any greater oversight of police departments than what already exists. She pointed to the state DOJ conducting a policy review of the Vallejo Police Department and the existence of the county civil grand jury, which can author reports and compel a response from the agencies. "There's already checks and balances in place,” Abrams said.

In discussing recent statewide reforms that allow people convicted of felonies to serve on juries, Abrams said that she wouldn’t exclude a juror just because they had a bad experience with a police officer, though she would want to ensure that it would not impede the potential juror’s ability to judge an officer’s testimony fairly.

Henry said that she trains prosecutors to be careful in who they excuse from jury duty. “I've always told my attorneys, ‘You better have a good reason to excuse someone,’” she said.

For juvenile prosecutions, Abrams lamented a recent change in state law that excludes people under the age of 16 from being tried as adults, under any circumstances. She recalled a case where a 15-year-old boy had stabbed a 14-year-old girl 50 times and her 2-year-old brother. That 15-year-old was released after the change in state law. “For us it was very concerning that he wasn't truly held accountable,” she said.

Henry said that Proposition 57 — which created a transfer hearing process for juvenile prosecutions — was an appropriate check on prosecutors’ power and prevented DAs from deciding unilaterally who should be prosecuted as an adult, instead leaving it up to a judge. For nonviolent juvenile offenders, Henry said that there should be leniency and the DA’s office should be more engaged with community organizations to prevent young people from committing crimes in the first place.

Near the end of the debate, Abrams took direct aim at Henry, and said that she had been doing what Henry was only talking about, and was hard at work in the community. “I think it's really important, when you hear Ms. Henry talk about all the things she's going to do: she's been at the DA's office now for 8 years. She could have done any of these things she's talking about,” Abrams said. “She says what she's going to do. I've been doing them.”

But Henry suggested that Abrams had been avoiding criticism. “This county deserves someone who can reach out to all groups of people. That is the pursuit of equal justice, not hiding in an office because of fear of what someone might say about you,” Henry said. “You have to be willing to take those criticisms, because those criticisms help us realize that we're not doing the job we should be doing and how to get better.”