Sheriff's deputies have posted Three Percenter imagery on their public social media pages for years.
Share this news on: 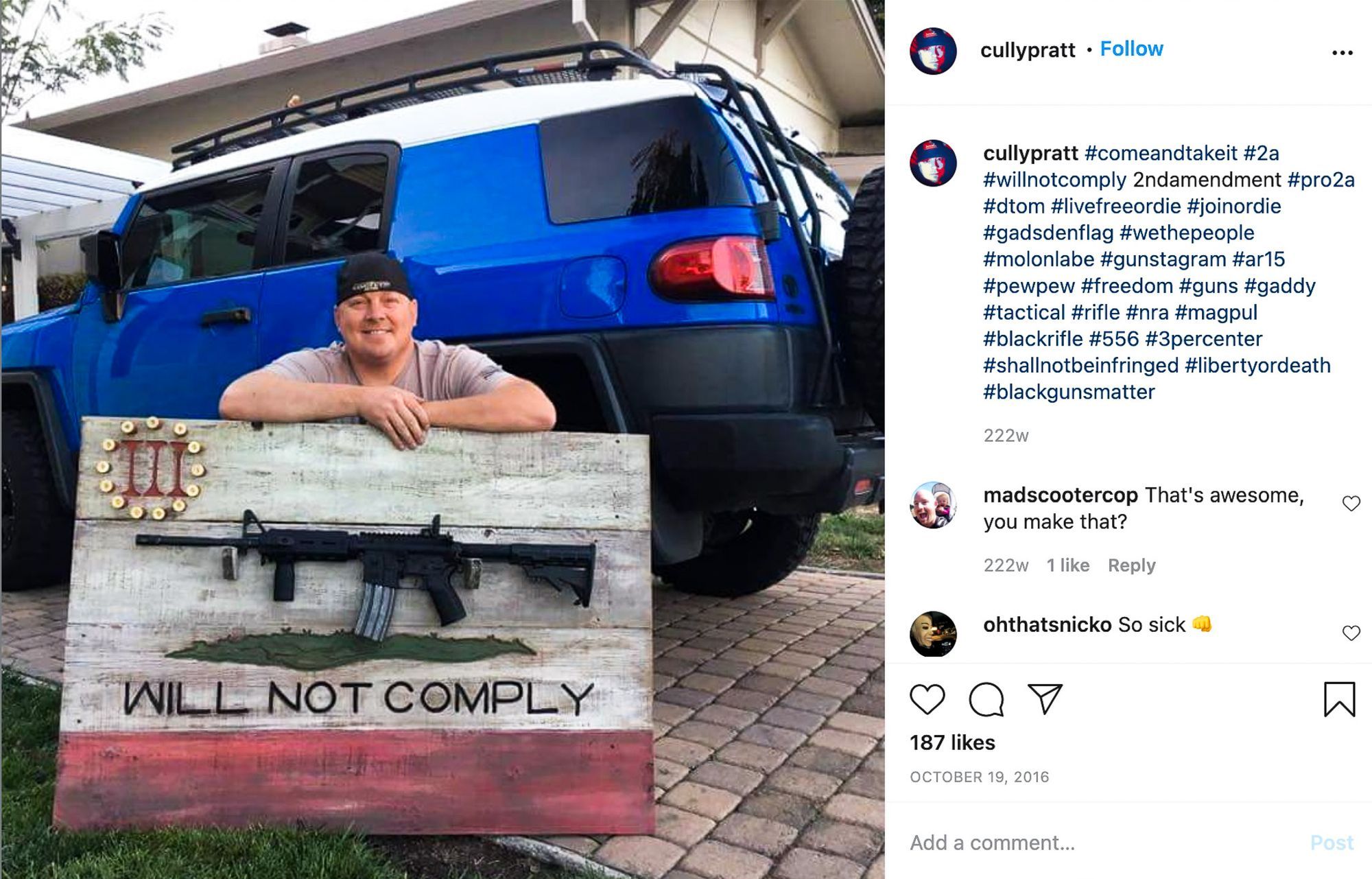 Solano County Sheriff’s Sgt. Cully Pratt poses with a rifle display rack he made for fellow sheriff’s Sgt. Roy Stockton. The handmade wood display features symbolism associated with the far-right Three Percenter movement, which has been linked to several terrorist plots around the country.

Daniel “Cully” Pratt of the Solano County Sheriff’s Office has a side business making decorative wood carvings. Some feature characters from movies starring his brother Chris Pratt, like “Jurassic World” and “Guardians of the Galaxy.”

Others are more political, like the rifle display he made for Sgt. Roy Stockton, a Sheriff’s Office colleague and recently-elected member of the Vacaville City Council.

The piece resembles a California flag, but instead of a bear, it features hooks for Stockton’s AR-15 rifle above the words, “WILL NOT COMPLY.” Thirteen shotgun shells, arranged like the stars of the Betsy Ross flag, form a circle around the Roman numeral III. Cully Pratt grins from behind his creation in a 2018 Instagram post, which he labeled with the hashtag, “#3percenter.”

Three Percenters are a loose-knit collection of far-right extremists characterized by anti-government, pro-gun views, and a willingness to violently defy the federal government. At least one person with Three Percenter ties has been charged in connection with the Jan. 6 storming of the Capitol in Washington, D.C., where five people died, including a police officer. Others have been connected to bombings and kidnapping plots.

The group appears to have ideological support within the Solano County Sheriff’s Office. Pratt, Stockton and at least one other current sheriff’s deputy have posted Three Percenter imagery on their public social media pages for years. Their friends and followers include staff at the sheriff’s office. While not all interacted with the deputies’ Three Percenter posts, their identity and stated views were clear.  Rather than face repercussions for their support of a group linked to violence, the deputies have risen in the ranks of the sheriff’s office and have been trusted with high-profile public assignments.

Each of the deputies who posted extremist content were contacted, but most did not respond. Solano County spokesperson Matthew Davis declined to comment on whether county officials are active members of any anti-government militia.

Three Percenters do not have a central organization but instead are largely autonomous groups with sympathetic ideology. Formed in 2008 following the election of President Barack Obama, the group derives its name from the erroneous belief that only 3 percent of American colonists fought in the revolution against Great Britain. But instead of fighting an overseas oppressor, Three Percenters view the United States government as a tyrannical threat, especially in the context of gun control.

Nationwide, Three Percenters have been accused by federal authorities of plotting violence in a number of recent incidents. Adam Fox, one of the men accused of plotting to kidnap the governor of Michigan last year, was the leader of a Three Percenter group, according to investigators. A man in Ohio inspired by the Three Percenter movement was arrested last May after he allegedly tried to recruit others to help kidnap or kill police officers. A former sheriff’s deputy who led an Illinois Three Percenter group was convicted in December of bombing a mosque. A man who told undercover FBI agents he had “III% ideology” was sentenced to 25 years in prison for the attempted bombing of a bank in Oklahoma City in 2017.

Presenting themselves as modern-day patriots, Three Percenters make frequent reference to symbols of the American Revolution. The militia’s logo consists of 13 stars, as in the Betsy Ross flag, arranged around the Roman numeral III.  The group’s other visual references include the year 1776 and the Gadsden flag, which features a coiled rattlesnake above the words, “Don’t Tread on Me.”

Like Pratt, Stockton also sells items referencing far-right imagery. He sold leather under the name High Brass Leather and metal under the name Live Free EDC. Products with the coiled snake of the Gadsden flag and the Three Percenters logo could be observed throughout his stores and their corresponding social media accounts, which have since been set to private.

Among the items in Stockton’s stores were a $200 knife clip and a silver Gadsden flag bottle opener listed at $746.40.

Stockton also reposted numerous photos with Three Percenter iconography. Just prior to the 2016 election, he shared a photo of several guns with the caption, “getting ready for the election tomorrow.”

“I strongly condemn the violent and racist views of these extreme right, militia, and anti-government groups,” Stockton said in an email. “I believe that law enforcement officers and other public officials cannot keep their oaths to uphold the Constitution if they are associated with any extremist or anti-government groups.”

Deputy Dale Matsuoka, the sheriff’s office homeless outreach coordinator, has also posted Three Percenter symbols on his public Facebook page under the name “Matt Daley”and other aliases. On July 16, Matsuoka changed his Facebook profile picture to the Three Percenter logo. It was accompanied by the slogan, “When tyranny becomes law, rebellion becomes duty.”

Other current and former law enforcement officers showed frequent support for Matsuoka’s posts. One person who frequently “loved” Matsuoka’s Three Percenter posts is Jeremie Patzer, a former Vallejo police officer who shot a man outside a bar while off duty in 2005 and killed a 21-year-old man with a Taser the following year. Despite Matsuoka’s open support for extremist views, like Pratt and Stockton, the Solano County Sheriff’s Office has highlighted him publicly for his work.

Others who express affinity with the Three Percenter movement have close ties with sheriff’s deputies. Pratt and Stockton run a nonprofit, Solano Family First Responders, for which they threw a fundraiser in October of 2019. Numerous law enforcement officials and local politicians attended, including Sheriff Tom Ferrara and Solano County Supervisors Erin Hannigan and Mitch Mashburn. A sheriff’s lieutenant and Vacaville City Councilmember at the time, Mashburn endorsed Stockton to take his seat on the city council.

During the barbeque, Stockton took a selfie with three men. They include Galen “Jamie” Estes, an employee with the county public works department, who wore a black hooded sweatshirt with a white Spartan helmet situated between two rifles over the Greek phrase, “molṑn labé.” The phrase, which means, “come and take them,” is a rallying cry of anti-gun control hardliners.

Estes also has a Three Percenter tattoo on his left arm, which appeared fresh when he showed it off in a 2017 Instagram post. He is friends with Stockton, Pratt and at least six other current members of the sheriff’s office on Facebook, where he shared numerous Three Percenter symbols.

Estes’ other Facebook friends include Sheriff’s Lt. Jonathan Mazer and his ex-wife Sgt. Toni Mazer, who recently changed her name to Taylor after she remarried. Taylor “loved” a Three Percenter logo posted to Estes’ Facebook page on Jan. 15. She did not respond to emailed questions about whether and to what extent she supports violent extremism.

As public information officer for the sheriff’s office, Pratt was tasked with promoting the agency on Facebook and other social media. His famous brother often helped him get a boost of publicity, such as when he attended Super Bowl LII wearing a Solano County Sheriff’s Office hat, which the agency noted on Facebook.

Chris Pratt has also promoted Cully Pratt’s wood carving business to his own 30 million Instagram followers. He sees his brother frequently and has been photographed with Stockton as well. And Chris Pratt’s fondness for patriotic imagery has at times shown a reverence for the Revolutionary War. In 2017, Cully Pratt took a selfie with his brother flashing one of Stockton’s coiled snakes. Chris Pratt appeared at a sheriff’s fundraiser screening of “Jurassic World” in 2018 wearing a hat with the 13 stars of the Betsy Ross flag. Last year, he drew scrutiny when he was photographed wearing a “Don’t Tread on Me” shirt.

Carolyn Gallaher, an American University professor who has studied far right movements, said she was not surprised that law enforcement officers support the Three Percenter movement. “Far right movements have tried to infiltrate the military and policing and police have not done a very good job of making sure these people don’t wear the badge,” she said.

Indeed, at least 31 police officers in 12 states are being investigated for their role in the riot at the Capitol, according to the Associated Press. The FBI has investigated far-right extremists’ strategic infiltration of local law enforcement for over a decade. Officers responding to police brutality protests over the summer displayed insignia of the Three Percenters and Oath Keepers, another extremist group. A 2019 investigation by Reveal found hundreds of law enforcement officials in extremist Facebook groups.

The true depth of law enforcement support for extremism is difficult to ascertain. Many of the law enforcement officials’ social media accounts used pseudonyms. One former California parole officer acknowledged using Parler, a social media company favored by far-right extremists that was shut down by its web hosting service because of its role in organizing the attack on the Capitol. The Oakland Police Department recently launched an internal investigation into an Instagram account spreading racist and sexist posts, but has been unable to identify the officer or officers who ran it.

There is also evidence Bay Area law enforcement support for violent extremism goes beyond Solano County. A former Oakland police officer who attended the Jan. 6 riot at the U.S. Capitol had his social media posts “liked” by several current and former officers. A Pleasanton police officer is reportedly under investigation for his social media posts during the riot. In 2017, the Oath Keepers had a booth at Urban Shield, a police training convention hosted by the Alameda County Sheriff’s Office.

The official Instagram account of the Oakland-area California Highway Patrol “liked” a post with a Three Percenter logo last year. CHP officials said that they have been unable to determine which employee “liked” the post or when but do not believe it is part of a pattern or suspect any officers of misconduct. Agency spokesperson Officer Sean Layton said that while officers should never take any political stance while acting as police, when they were off-duty they had the right to their own political opinion. He said the “like” was a mistake and took it down.

Gallaher called the idea that officers could affiliate with extremist groups like the Three Percenters in their spare time “nonsense.”

“If you are a policing agency … you do not want extremists working for you, you shouldn’t want that,” she said. “It suggests that the police are supporting these groups and an agenda that is not to protect and serve all.”