Races in Fairfield and Vacaville could give former cops an oversight role over law enforcement agencies.
Share this news on: 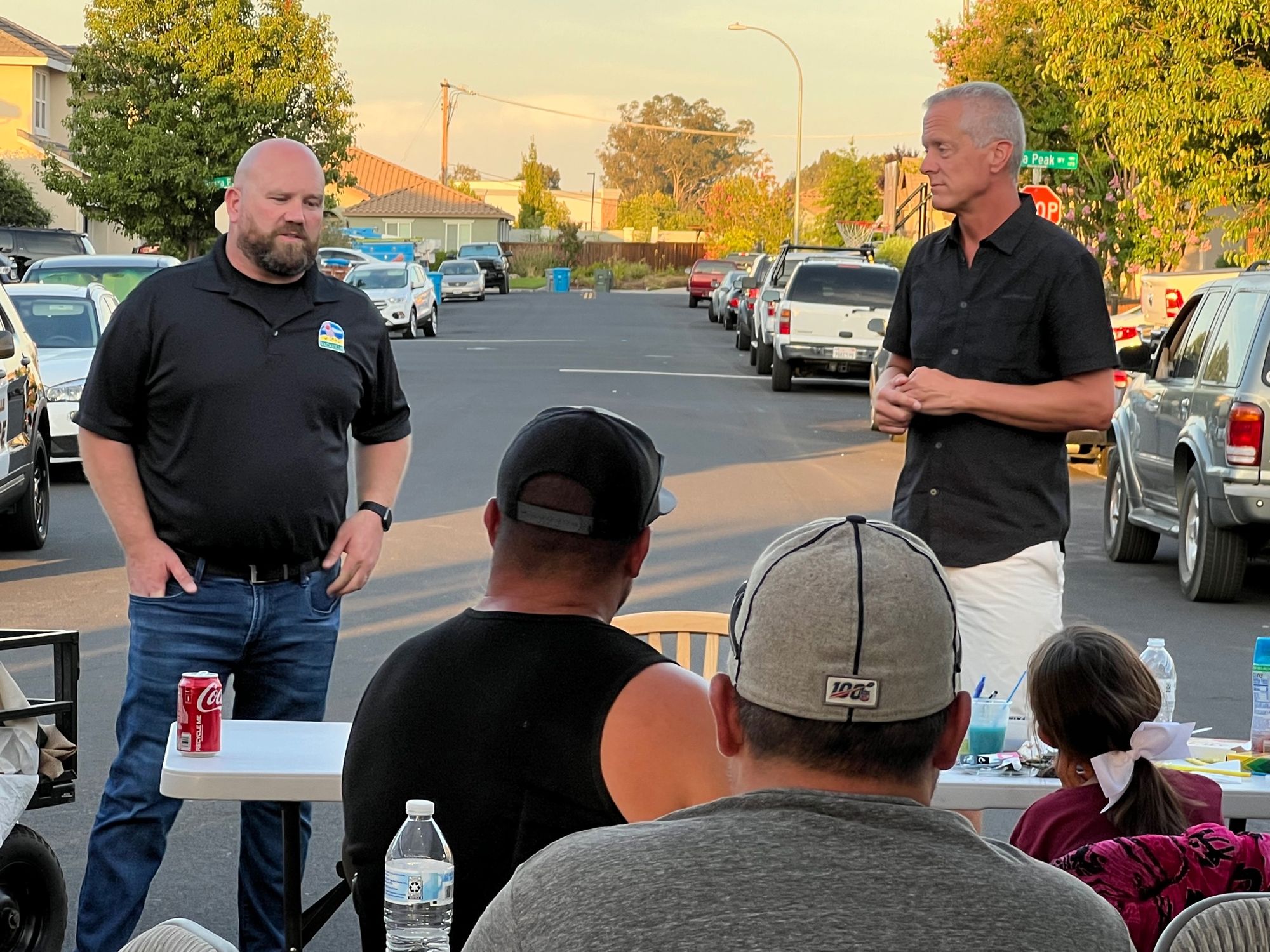 This story is part of a project called Democracy Day, in which newsrooms across the country are shining a light on threats to democracy and what action is needed to protect it.

If they were to win, two of seven members of the Vacaville City Council would be current or former law enforcement officers and two of five members of the county Board of Supervisors would be former law enforcement officers. That would come as the Vacaville City Council is expected to receive an audit from a police reform consultant and after the Solano County Board of Supervisors rejected a community effort to enact new oversight over the sheriff’s office, with a recently retired former sheriff’s lieutenant voting against the effort.

Neither Carli nor Timm have addressed the possibility of support in local law enforcement for extremist movements, which was the subject of a Solano County Civil Grand Jury investigation last year and partly spurred the Board of Supervisors to consider enacting oversight of the sheriff’s office.

But both have publicly touted endorsements from Vacaville City Councilmember and Solano County Sheriff’s Sgt. Roy Stockton. Stockton was revealed last year to have sold leather and metal crafts online affiliated with the Three Percenter movement, a far-right extremist group that the FBI has connected with bombing plots across the country and the Jan. 6 attack on the U.S. Capitol.

Carli and Timm did not respond to written questions prior to publication, including about whether they found Stockton’s posts to be appropriate for a law enforcement officer and elected official.

Carli retired suddenly from the Vacaville Police Department in February 2021. According to his LinkedIn profile, he joined the department in 1989 and became chief of police in April 2014.

His LinkedIn profile says that he is “nationally recognized as a progressive and innovative leader in law enforcement,” and implemented “a radical culture shift to create psychological resiliency within first responders” while with Vacaville police. Carli’s profile goes on to say that his “most relevant work focuses on national best practices in policing, use of force, and public trust” and he “has dedicated his time and efforts to improve the profession and implement change.”

But when Carli left Vacaville police, the department was contending with problems on multiple fronts. After a video of an officer hitting a dog went viral in December 2020, the department was criticized for its response. Meanwhile, regular protests had grown tense. The police station was vandalized during protests in January 2021. A week later, Vacaville police violently arrested four protesters in an unrelated incident and seized their phones.

Carli announced his retirement on Feb. 19, 2021, and went on leave four days later. A few months after his departure, an officer was caught on camera punching a teenager with autism. The city settled a lawsuit brought by the teen’s family for $200,000 earlier this year.

In May 2021, Vacaville hired former Fairfield Police Chief Joe Allio to be interim chief. The city touted him as a reformer, noting his recent experience in the Vallejo Police Department during a scandalous period. The city also announced it would conduct an audit of the department’s internal culture, training, policies, and procedures.

“I realize the many challenges faced by our police department this past year has significantly strained public trust with the City,” then-Vice Mayor Nolan Sullivan said in a statement after Allio was hired. “Chief Allio brings an important outside perspective, and impressive experience working in police audits, reform, and improvement.”

The OIR Group, a Southern California-based firm which had been conducting a review of police practices in Vallejo, was contracted to conduct the audit. It remains ongoing.

Since he retired, Carli has worked for Lexipol, a company that drafts policies for police departments designed to limit liability.

Carli announced his campaign for mayor on July 30. Three days later, he received an endorsement from Stockton, the Vacaville councilmember and Solano County Sheriff’s sergeant.

“When it comes to protecting the quality of life our community deserves, retired Vacaville Police Chief, John Carli, is a proven leader,” Stockton wrote on Facebook on Aug. 2. “His leadership and experience is exactly what Vacaville needs moving forward.”

Carli shared Stockton’s post to his own campaign page. “I am grateful for your support and endorsement and look forward to the opportunity to work together and lead Vacaville,” he wrote. A day later, the two appeared together at a National Night Out event in Vacaville.

Stockton has been the subject of controversy ever since revelations that he sold crafts with Three Percenter symbols online, including leather goods under the name High Brass Leather and metal under the name Live Free EDC. On Instagram pages to promote his businesses, Stockton reposted numerous photos with Three Percenter symbols and frequently used the #3percenter hashtag. Stockton tagged the sheriff’s official Instagram page from his leatherworking page. Both of his pages included the sheriff’s office emblem.

Before the 2016 election, Stockton shared a photo of several guns with the caption, “getting ready for the election tomorrow.” The same year, Stockton’s colleague at the sheriff’s office, Sgt. Cully Pratt — the brother of actor Chris Pratt — made Stockton a board to hang his AR-15 rifle with a Three Percenter symbol.

Stockton provided a statement last year condemning extremism when asked about his connections to people showing extremist ties but has not explained why he displayed and sold Three Percenter merchandise, nor why Cully Pratt made him a Three Percenter display to hang his rifle.

“I strongly condemn the violent and racist views of these extreme right, militia, and anti-government groups,” Stockton said in an email last year. “I believe that law enforcement officers and other public officials cannot keep their oaths to uphold the Constitution if they are associated with any extremist or anti-government groups.”

Stockton was elected to the Vacaville City Council in 2020, shortly before the revelations, taking 38% of the vote in a four-way race.

Board of Supervisors could have two former law enforcement officers

Mashburn was elected supervisor in March 2020 with 50.2% of the vote, barely beating pastor and school board trustee the Rev. David Isom.

November’s election could put a second law enforcement officer on the Board of Supervisors if Timm, a Fairfield city councilmember and former Fairfield police officer, is victorious.

According to the city of Fairfield’s website, Timm is the son of a retired U.S. Air Force colonel who was stationed at Travis Air Force Base. Timm joined Fairfield police in 1973 and worked there for 31 years before he retired in 2004.

He was first elected to the Fairfield City Council in 2007 but lost when he ran for reelection four years later. He ran again in 2014 and won one of two seats up for election that year, coming in second with 15% of the vote. He was reelected in 2018, again coming in second place with 28% of the vote.

Timm was one of five candidates who ran for county supervisor this year following the retirement of Supervisor Jim Spering. Two candidates were former police officers. Joseph Joyce, who worked for the Solano County Sheriff’s Office, the Emeryville Police Department and the Vallejo Police Department, received less than 9% of the vote in June. Timm won 28% of the vote. Williams, the Suisun City councilmember, beat Timm with 36%, but no candidate received the more than 50% of the vote necessary to win the race outright, leading to a runoff between Timm and Williams.

On the Board of Supervisors, Timm would be in an oversight role over the Solano County Sheriff’s Office. Last year, Mashburn was able to vote whether to enact greater oversight over his former agency less than a year after he left the sheriff’s office.

Mashburn’s vote came after a series of scandals in the sheriff’s office that started with the revelations about Stockton and the other deputies displaying extremist support. Ferrara declined to conduct an investigation, saying that he had personal conversations with the deputies, who assured him they did not support extremist movements. But activists with Benicia Black Lives Matter pushed for the Board of Supervisors to create a new oversight board that would have the ability to compel documents and testimony from the sheriff’s office, a new power for the board authorized by the state legislation AB 1185 in 2020.

At first the board was reluctant to take up the matter. But later that year, the sheriff’s office faced more scandals. First a Black woman sued the sheriff’s office and said she was beaten unconscious by two deputies under Stockton’s supervision; then court testimony revealed that a sheriff’s sergeant allegedly sexually harassed a dispatcher, but the sheriff decided not to terminate the sergeant, disregarding a recommendation by his own internal affairs division. After that, the Board of Supervisors agreed to discuss the possibility of an oversight board.

During the board meeting on Nov. 2, Ferrara defensively addressed the board, saying that his public statements had been misinterpreted and he could not discuss various issues because of ongoing lawsuits. “The reason why I'm taking this a little sensitively is my organization is extremely well run,” Ferrara said. “And what we have is a biased media.”

“So there are other mechanisms for oversight for the sheriff,” Mashburn said. “I believe that there are enough in place now that we do not need to create yet another bureaucracy within the county, that would not necessarily provide oversight. We have the ability to provide the communication already.”

Correction: This article has been updated to correct the number of members of the Vacaville City Council.