Allio’s email reveals that the department disclosed details to a PR consultant that it still has not publicly confirmed.
Share this news on: 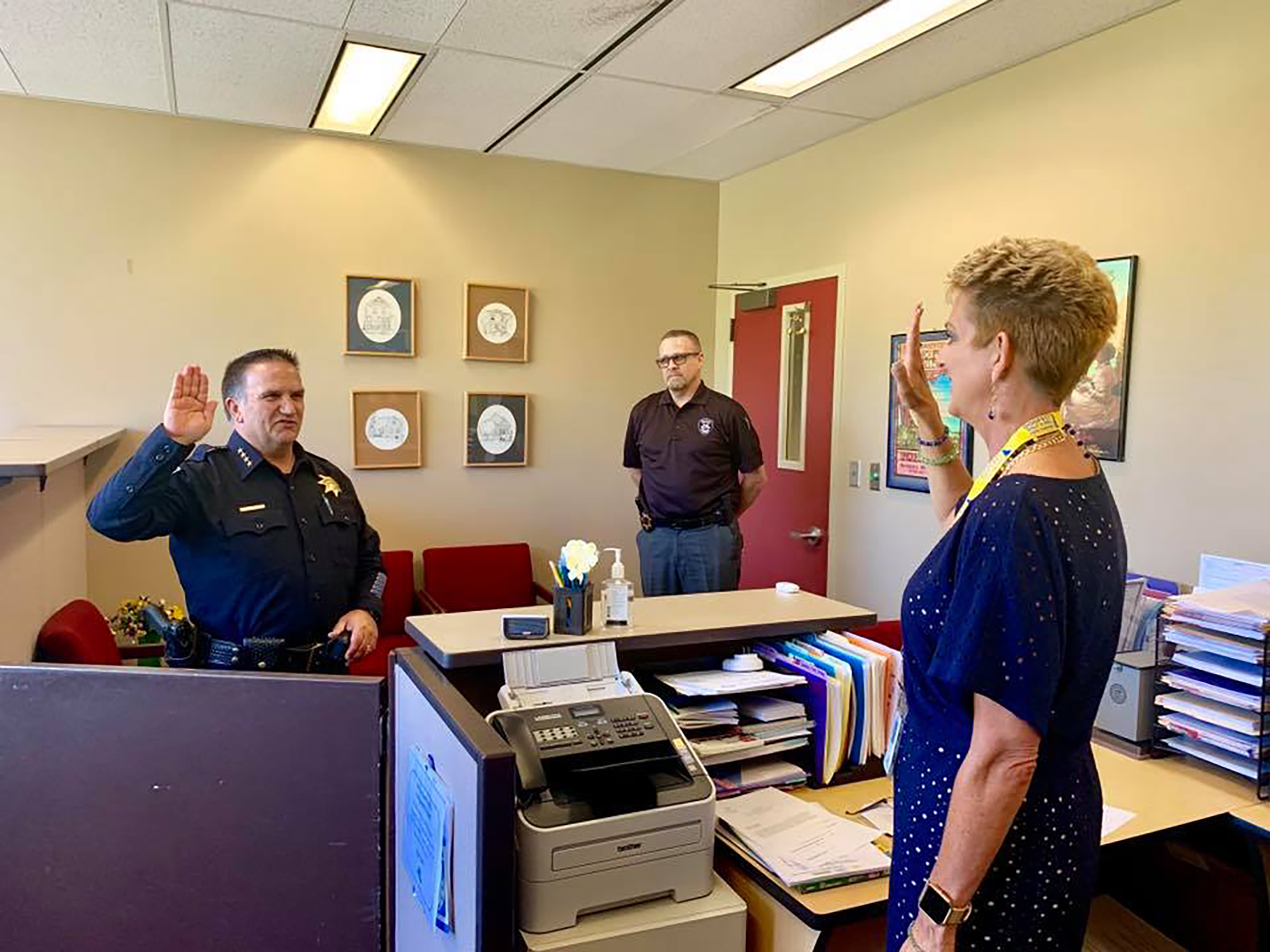 Joseph Allio is sworn in as Vallejo's interim police chief in 2019. Allio disclosed details of the city's badge bending scandal to a PR consultant days after the news broke. Photo: Vallejo Police Department.

VALLEJO - Just days after news broke in the summer of 2020 that some members of the Vallejo Police Department bent their badges to mark their participation in fatal shootings, a high-ranking police official confirmed the practice to a public relations firm hired by the city, according to an email obtained by the Vallejo Sun.

Joe Allio, then-interim assistant police chief, sought advice from Laura Cole, a former journalist who runs a Vacaville-based police consulting firm named Cole Pro Media, on what to do about the scandal.

“On Wednesday this week I was able to confirm with a senior lieutenant that badge bending was a part of VPD history,” Allio wrote in a July 31, 2020, email, three days after Open Vallejo published an article about the ritual. Allio didn’t name the lieutenant in his email.

Hours later, on the same day, Vallejo Police Chief Shawny Williams announced that he had ordered a third-party investigation to look into the badge bending allegations. Williams said two sources within the police department confirmed that the ritual had taken place.

But Allio’s email reveals that the department disclosed details to Cole that it still has not publicly confirmed. In fact, the department has yet to disclose the name of any officer who was involved in the badge bending practice, but Allio told Cole that the department knew about the practice as far back as February 2019 when then-Vallejo police Officer Ryan McMahon was placed on administrative leave regarding a separate issue.

The captain who collected McMahon’s badge noticed it had been bent twice. According to Allio, the captain brought the issue “to Chief (Andrew) Bidou who per the captain was very angry and said he would handle it.”

That captain, John Whitney, was fired in August 2019. He claims in a wrongful termination lawsuit filed against the city and police department that he was let go after raising concerns about the badge-bending ritual.

Allio wrote that he was told that Bidou had a meeting with those involved “and told them to fix their badges and never let this happen again.” Allio added that when he became interim police chief in mid-2019 he was informed of the practice. He was told by then-City Manager Greg Nyhoff that “Bidou had been aware and had taken action.”

But Allio didn’t mention what action was taken. After receiving the information from Allio, Cole said she would “work on this.” What actions she took on behalf of the city in that regard has not been disclosed. Neither the city nor Cole responded to a request for comment.

Allio left Vallejo last year and is now interim police chief in the city of Vacaville. He also did not respond to a request for comment.

After the badge bending practice was exposed publicly, former Sonoma County Sheriff Rob Giordano was hired to conduct an investigation. In late July, a Vallejo city attorney told a Solano County judge that the independent investigation should be done by mid-September.

In a May court declaration, Giordano confirmed that the investigation was lagging due to some witnesses no longer being employed with the city of Vallejo while others are on medical leave.

McMahon, who allegedly had his badge bent twice, was fired last fall after an internal affairs investigation concluded he engaged in unsafe conduct when officers shot and killed Willie McCoy in February 2019.

Six police officers, including McMahon, fired 55 rounds at McCoy in about 3.5 seconds after he was found unconscious in his car outside the Taco Bell along Admiral Callaghan Lane. McCoy’s family filed a wrongful death lawsuit against the city – which is still ongoing. McMahon wasn’t fired for shooting McCoy, but rather for firing his gun while another officer was in his line of fire.

McMahon also beat, Tased, shot and killed Ronell Foster in early 2018 after a brief foot pursuit. The incident began when McMahon attempted a traffic stop on Foster, who was riding his bicycle erratically.

McMahon said he wanted to “educate” Foster about driving the bicycle without a light at night. That’s when Foster fled. McMahon eventually caught up to him as the two struggled behind a building in downtown Vallejo. McMahon told investigators that Foster “ripped” the officer’s flashlight from his hand. Saying he feared for his life, McMahon shot Foster seven times, killing the 32-year-old man.

Foster’s family sued the city and last fall received a $5.7 million settlement, the largest payout related to a police killing to date.

The Vallejo Police Department, along with other California police agencies, have spent thousands of dollars with such public relations firms to soften the image of police following the death of George Floyd. Cole’s work also includes crafting videos to explain why officers shot a person.

Public records show that the city of Vallejo paid Cole and her company, Critical Incident Videos LLC, along with Cole Pro Media beginning in July 2020 as the badge bending was made public.

According to invoices, Vallejo paid Cole $3,000 a month for “transparency engagement advising.” On top of that, the city paid Cole $3,000 for editing a “critical incident video” in August 2019, when Vallejo police released more footage of the killing of Willie McCoy.

The city also paid Critical Incident Videos $4,900 in July 2020 to serve as a “technical expert” and edit police body camera footage of the June 2, 2020, police killing of Sean Monterrosa of San Francisco.

A former Vallejo police lieutenant, Sid DeJesus, was reimbursed nearly $100 in 2014 to attend a training titled “Managing the Mainstream Media” at the Fairfield Police’s training facility for a seminar that Cole taught. Topics advertised on the poster include “What to do when disaster strikes” and “How to make reporters work for you.”