Pratt said he did not believe the Three Percenter symbols represented anti-government views.
Share this news on: 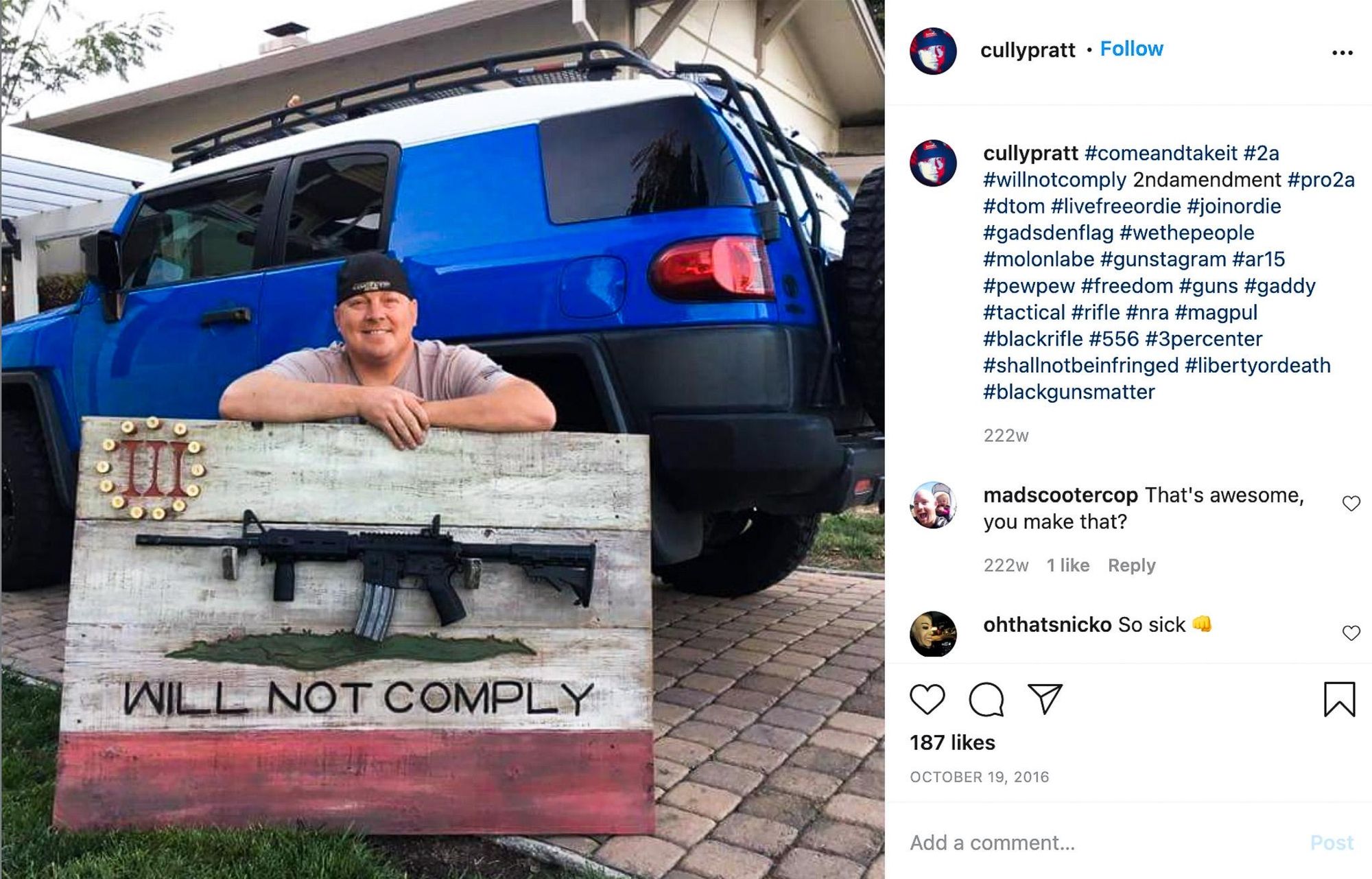 BENICIA – Solano County Sheriff’s Sgt. Daniel “Cully” Pratt — the brother of actor Chris Pratt, who was revealed last year to have given a custom gun rack with a Three Percenter emblem to a fellow sheriff’s sergeant — retired from the sheriff’s office on Friday.

“I’m going to start doing a little bit more artwork, a little bit of handyman services,” Pratt said in a video announcing his retirement posted to Instagram on Saturday. “Painting, projects, murals, antique restorations, woodworking, going to get back into woodworking.”

In an investigative report last year, Pratt was revealed to have promoted the Three Percenter anti-government militia group on his social media pages.

In particular, Pratt posed with a rifle display board he made for fellow sheriff’s Sgt. Roy Stockton, which featured hooks for Stockton’s AR-15 rifle above the words, “WILL NOT COMPLY.” Pratt labeled the post on Instagram with the hashtags “#3percenter” and “#blackgunsmatter.”

Federal prosecutors have argued that Three Percenters believe in armed rebellion against the federal government. At least six alleged Three Percenter affiliates from California have been charged for the Jan. 6, 2020, attack on the U.S. Capitol.

However, Sheriff Tom Ferrara defended Pratt, Stockton and another deputy who promoted the group on social media, sheriff’s homeless outreach coordinator Dale Matsuoka, saying that they only sought to show support for the Second Amendment and that the FBI had cleared the deputies of any extremist affiliations. The FBI later disputed Ferrara’s statements.

In his own statement to the Vacaville Reporter, Pratt also said he did not believe the Three Percenter symbols represented anti-government views, though months before he posted the photo of Stockton’s gun rack, Three Percenter groups were involved in an armed standoff with federal authorities in Oregon that left a man dead.

The fallout from the controversy included the sheriff’s office withdrawing from its contract to provide policing services at Solano Community College and an effort to have the Board of Supervisors create a new oversight board for the sheriff’s office.

Among other duties, Pratt worked as the sheriff’s public information officer. In that role, he often promoted the sheriff’s office by leveraging the celebrity of his brother, actor Chris Pratt, who has starred in movies such as “Jurassic World,” “Guardians of the Galaxy,” and two “Avengers” movies as the character Starlord.

In turn, Chris Pratt has promoted Cully Pratt’s wood carving business to his own 30 million Instagram followers. Pratt’s carvings at times promoted his brother’s movies, others contained Bible verses, and others had political messages, including supporting the Second Amendment.

In October, the group put on its third “Field of Dreams” BBQ fundraiser. The first, held in Dixon, was attended by the sheriff, then-Vacaville City Councilmember Mitch Mashburn and county Supervisor Erin Hannigan, among others. Mashburn would go on to be elected to the Solano County Board of Supervisors in November 2020.

It was unclear how the organization responded, but the letter warned that if it did not respond within 30 days, the matter would be referred to the Solano County District Attorney’s Office. Solano Family First Responders did not respond to an emailed request for comment.

Last year, Cully Pratt bought a house in Benicia, according to his public social media posts.