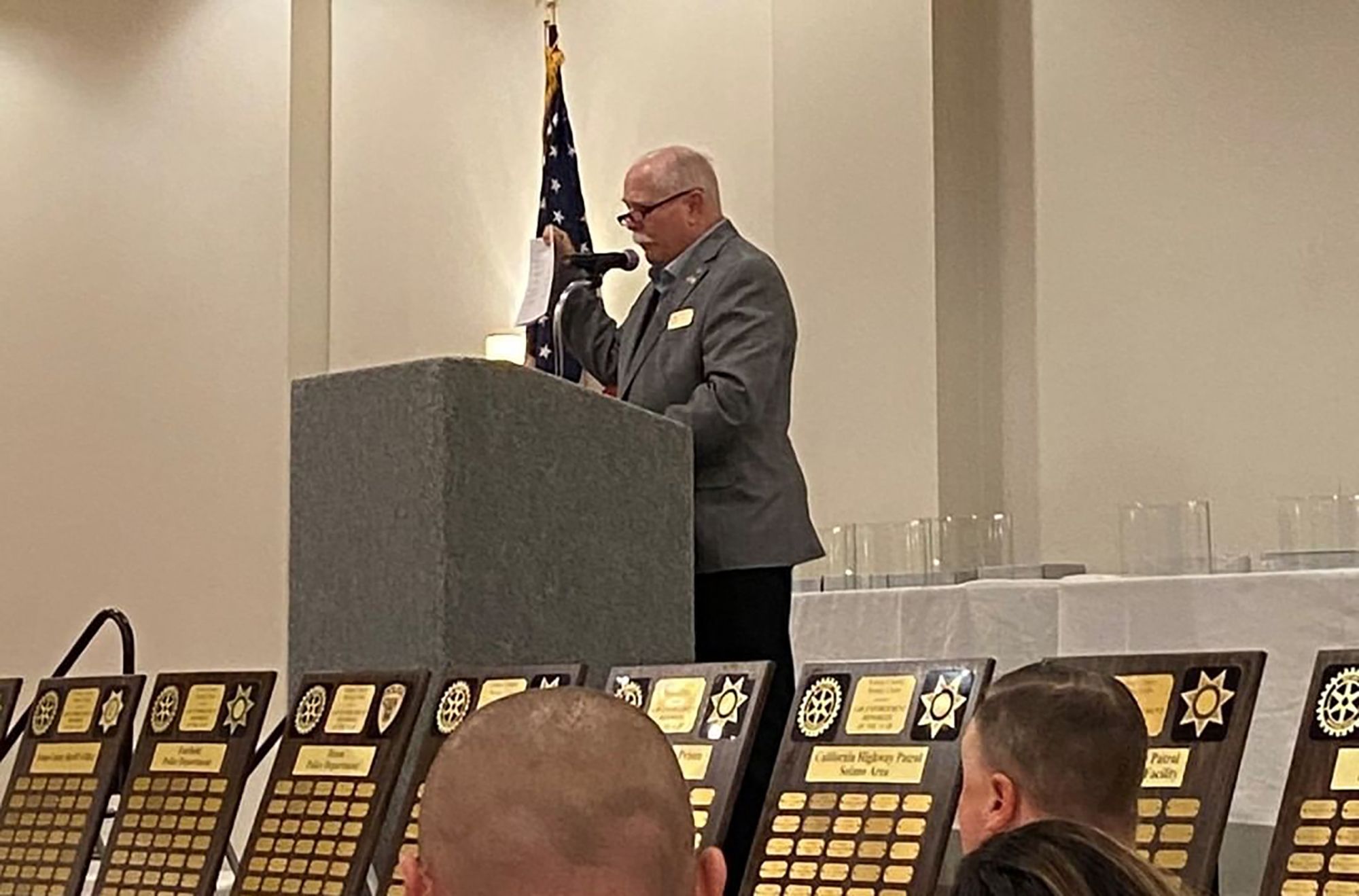 The clubs hosted the 29th annual event at the Hilton Garden Inn in Fairfield on Friday, honoring one officer each from 13 law enforcement agencies in Solano County.

That included Solano County Sheriff’s Deputy Dale Matsuoka, the department’s homeless outreach coordinator who also displayed support for the Three Percenter movement on his Facebook page before an investigative report last year revealed that Matsuoka was one of at least four deputies who had shown the movement’s insignia.

Sheriff Tom Ferrara declined to investigate the presence of extremism in his office, instead saying he had personal conversations with the deputies who told him they had intended to display support merely for the Second Amendment. He said the FBI had cleared his deputies of extremist support, which the FBI later disputed.

Vacaville Rotary Past President Mike Viera, a retired California Highway Patrol officer, was the emcee for Friday’s gathering. Rotary International’s website describes itself as a global organization with more than 46,000 local chapters which “promote peace” and “support education,” among other goals.

Last year, the Canadian government listed the Three Percenters as a “terrorist entity,” and the loose-knit movement has been linked to violent plots, standoffs and attacks across the country, including the plan to kidnap Michigan Gov. Gretchen Whitmer in October 2020. The “III%ers” are also one of several right-wing groups linked with the attempted insurrection of the U.S. government on Jan. 6, 2021.

Two North Bay men who also showed support for the Three Percenter movement are awaiting sentencing on terrorism-related charges for allegedly amassing a stockpile of guns and homemade bombs and planning to attack the head offices of California Democrats, Facebook and Twitter following the Jan. 6 attacks on the U.S. capitol because they believed the 2020 election was rigged against former President Donald Trump.

Rotary Clubs in Vacaville and Fairfield did not respond to requests for comment regarding their recognition of Matsuoka. It is unclear whether the clubs chose the honorees on their own or they recognized members submitted by their departments.

It's not the first time the Rotary Clubs have honored a controversial officer.

In 2016, then-Vallejo police Corporal Dustin Joseph was named the Vallejo Rotary Club’s Officer of the Year. Joseph and then-Vallejo police Officer Sean Kenney shot and killed Mario Romero in 2012, which resulted in a $2 million civil rights settlement for the city. After the shooting, the department promoted Joseph, who has since been implicated in the Vallejo police badge bending scandal. He later became a police officer in Fairfield, where he has been sued for allegedly violating people’s civil rights.

Matsuoka has also received multiple honors since the revelations that he displayed support for the Three Percenters. The Vallejo Flood and Wastewater District recognized Matsuoka with a proclamation in March for his role in contacting people living at homeless encampments ahead of last year’s Coastal Cleanup Day.

Matsuoka used the alias “Matt Daley” on Facebook and left his posts supporting the Three Percenter movement up for weeks after they were publicized. He has since removed most of the public posts from his profile and now goes by the alias Joe F. Tatanka. His profile currently prominently displays a photo of hip-hop artist Kanye “Ye” West and conservative pundit Candace Owens wearing “White Lives Matter” shirts.