For Vallejo officers who use force, a pattern of promotions and awards 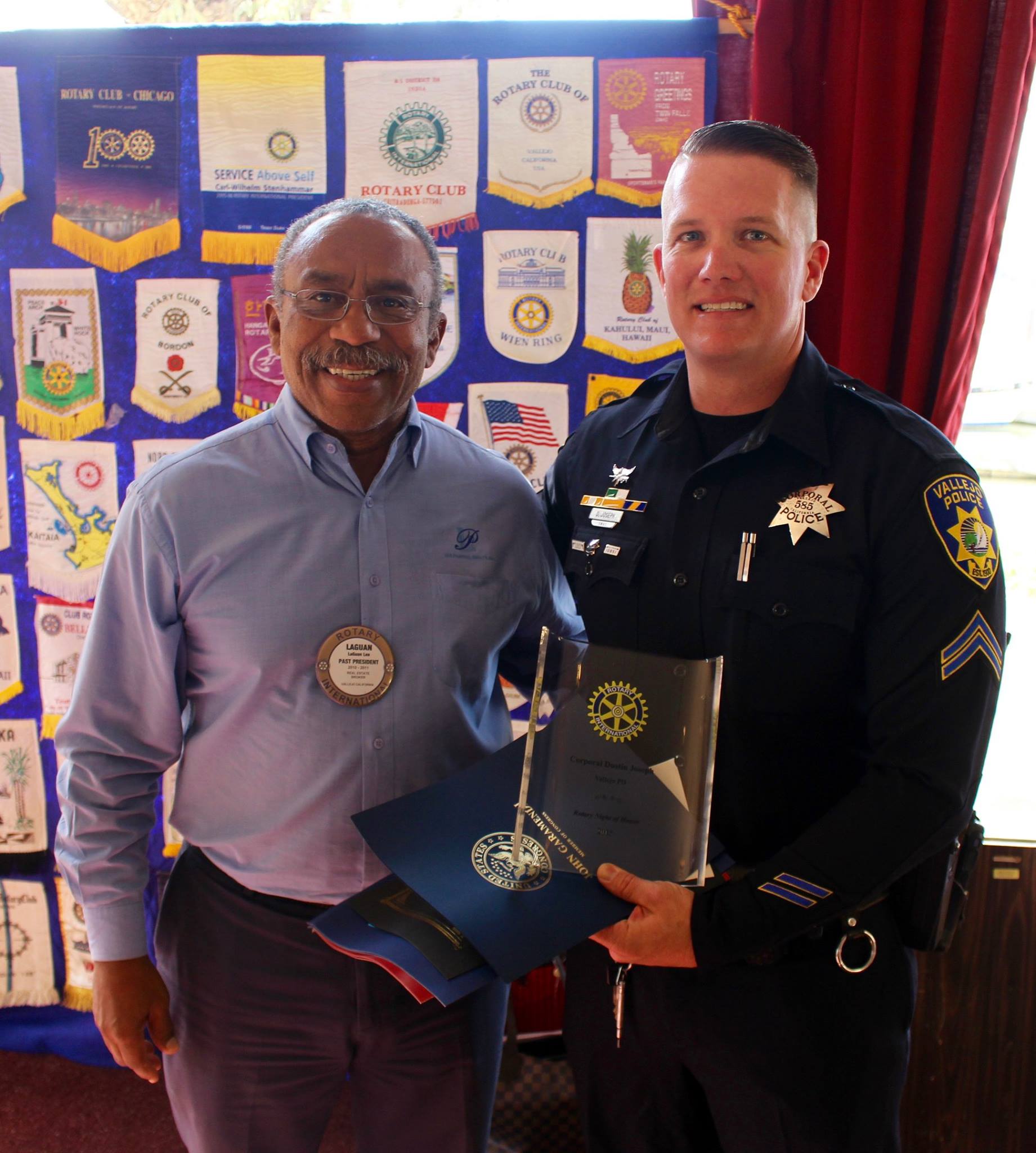 Corporal Dustin Joseph, right, was named the Vallejo Rotary Club’s Officer of the Year on Feb. 1, 2016. He and Officer Sean Kenney killed Mario Romero in 2012.

In May 2019, as the Vallejo Police Department was embroiled in controversy for excessive force allegations, the department held an awards and promotion ceremony at the Foley Cultural Center. One of the officers recognized was Officer Zachary Jacobsen, who was promoted to corporal.

Just six months earlier, the City of Vallejo paid $50,000 to settle a civil rights lawsuit that alleged Jacobsen and three other officers beat a suicidal man in 2015, breaking his ankle and leg. Meanwhile another potentially costly lawsuit was pending, for the fatal shooting of 21-year-old Angel Ramos.

A department review found that Jacobson didn’t follow policy when he shot Ramos without activating his body-worn camera. Still, he faced no discipline. In fact, a critical incident review board credited Jacobsen with saving the victim’s life.

But the body camera video would have proved useful as Jacobsen’s account of the shooting differs from other witnesses — including his own partner’s.

The officers had responded to a fight between several relatives at a family party. They approached the home from behind a fence while the fight was happening on a balcony 50 feet away. Jacobsen’s partner, Officer Matthew Samida, testified in a deposition in the family’s lawsuit that the balcony was dimly lit and their view was obstructed by a tree. In a separate deposition, Jacobsen described the scene as well-lit.

Samida Tased a man on the deck, who fell to the floor. Ramos got on top of the man after he fell. Samida testified that he saw Ramos punch him. Jacobsen said that Ramos was making stabbing motions, so he shot him. Ramos was killed. The man had not been stabbed. No knife was found near Ramos’s body.

In February 2018, the district attorney found that Jacobsen had not broken the law. In August 2018, the department determined he would not be disciplined. In May 2019, he was promoted.

Jacobsen’s story is not unusual in Vallejo. The department has consistently declined to discipline or re-train officers who use deadly force. Of 24 internal investigations into police shootings or other use of force incidents that took place in the past decade, none resulted in discipline.

In fact, these officers are frequently rewarded: of 45 officers whose actions over the last decade have led to monetary payouts in civil rights lawsuits, all but 15 have been promoted or received an award since the incident, according to an analysis of police and court records.

The Vallejo Police Department did not respond to a request for comment.

Some of Vallejo’s most decorated officers have also been involved in its costliest civil rights cases.

An internal review found that two officers who shot Mario Romero in 2012 had acted within policy, even though Officer Sean Kenney took himself out of cover and jumped on the hood of Romero’s car. The department also took no issue with the fact that Kenney and his partner, Dustin Joseph, fired on Romero 31 times. The officers alleged that Romero was armed, but only a pellet gun was found wedged in a car seat. Vallejo settled a lawsuit for $2 million on July 1, 2015. Neither officer was disciplined.

Romero was one of three people Kenney killed in 2012. After that, Kenney was transferred to investigations, where he led probes into officer-involved shootings. He was also assigned to the SWAT team and placed in special assignments. He was promoted to corporal and on April 27, 2017, was awarded a Good Conduct Medal and a Medal of Merit.

Joseph also went on to have a decorated career in Vallejo. He was promoted to corporal on Jan. 11, 2014. He received A Good Conduct Medal and a Life Saving Medal that same year and was named the Vallejo Rotary Club’s Officer of the Year on Feb. 1, 2016. He received another Medal of Merit on April 26, 2018.

In other cases, officers engaged in serious allegations of misconduct have risen to command positions within the department.

On Dec. 11, 2010, Officer Kent Tribble shot Guy Jarreau Jr., a Napa Valley Community College student, while he was filming an anti-violence music video. Police said that they received a report of a man brandishing a gun outside a tattoo parlor. When they arrived, Jarreau allegedly fled into a nearby alley and confronted Tribble with a gun.

But a lawsuit filed by Jarreau’s mother in 2012 alleges police ordered the entire film crew to the ground. Jarreau was already walking toward the alley when Tribble, who was not in uniform, shot Jarreau. He had his hands in the air and was holding only a green cup, according to the lawsuit.

Despite this, Tribble was promoted again to lieutenant. He received a Medal of Merit on April 26, 2018, and remains a member of the Police Department’s command staff.

Detective Mat Mustard was named Officer of the Year in 2015. That year, he investigated a bizarre kidnapping when a man broke into a couple’s home, tied them up, drugged them, and kidnapped the woman. While she was missing, Mustard interrogated her boyfriend and accused him of killing her.

The kidnapping sparked a massive search and national headlines. When the woman turned up alive, the department called a press conference where spokesperson Lt. Kenny Park accused them of faking the kidnapping and demanded an apology. But the FBI later found and arrested the perpetrator, Matthew Muller. He pleaded guilty to kidnapping the woman in 2016 and was sentenced to 40 years in federal prison.

The couple sued the department and reached a $2.5 million settlement in 2018, the most costly civil rights settlement for Vallejo in the past decade. But even though Mustard botched the department’s highest-profile investigation in years, he was singled out as its best officer.

Mustard continued to enjoy a charmed career. He received a Good Conduct Medal on April 27, 2017, and was promoted to sergeant on Sept. 15, 2018. Until this year, Mustard headed the Vallejo Police Officers Association, an influential position where his role included negotiating the employment contract for all Vallejo police officers.

Park, meanwhile, remained public information officer for years after the incident. He received a Good Conduct Medal on April 26, 2018.

Melissa Nold, a civil rights attorney working on several lawsuits against the Police Department, said the pattern of Vallejo officers receiving rewards and promotions after controversial incidents exemplifies an obstinate culture in the department about its high rate of shootings, violence by officers, and extraordinary civil rights payouts.

Nold pointed to the shooting of Ronell Foster by Officer Ryan McMahon in 2018. Foster had been riding a bicycle without a light and ran after police began following him in a patrol car. McMahon chased him and killed him after a struggle in a backyard. Foster was unarmed. McMahon was cleared of criminal charges and internal discipline in January. While those investigations were still pending, McMahon was one of six officers who shot and killed 20-year-old Willie McCoy after he fell asleep in his car at a Taco Bell drive-through.

After the Foster shooting, the police officers association praised a comment on Facebook saying that Foster “got what he deserved.”

“They took the position that somehow the person should have been dead because they ran from the police, which obviously is not a death penalty offense,” Nold said. “Their position is the officers are heroes when they hunt people down and shoot them.”