The city of Vallejo is suing a property owner to remove people experiencing homelessness from an encampment.
Share this news on: 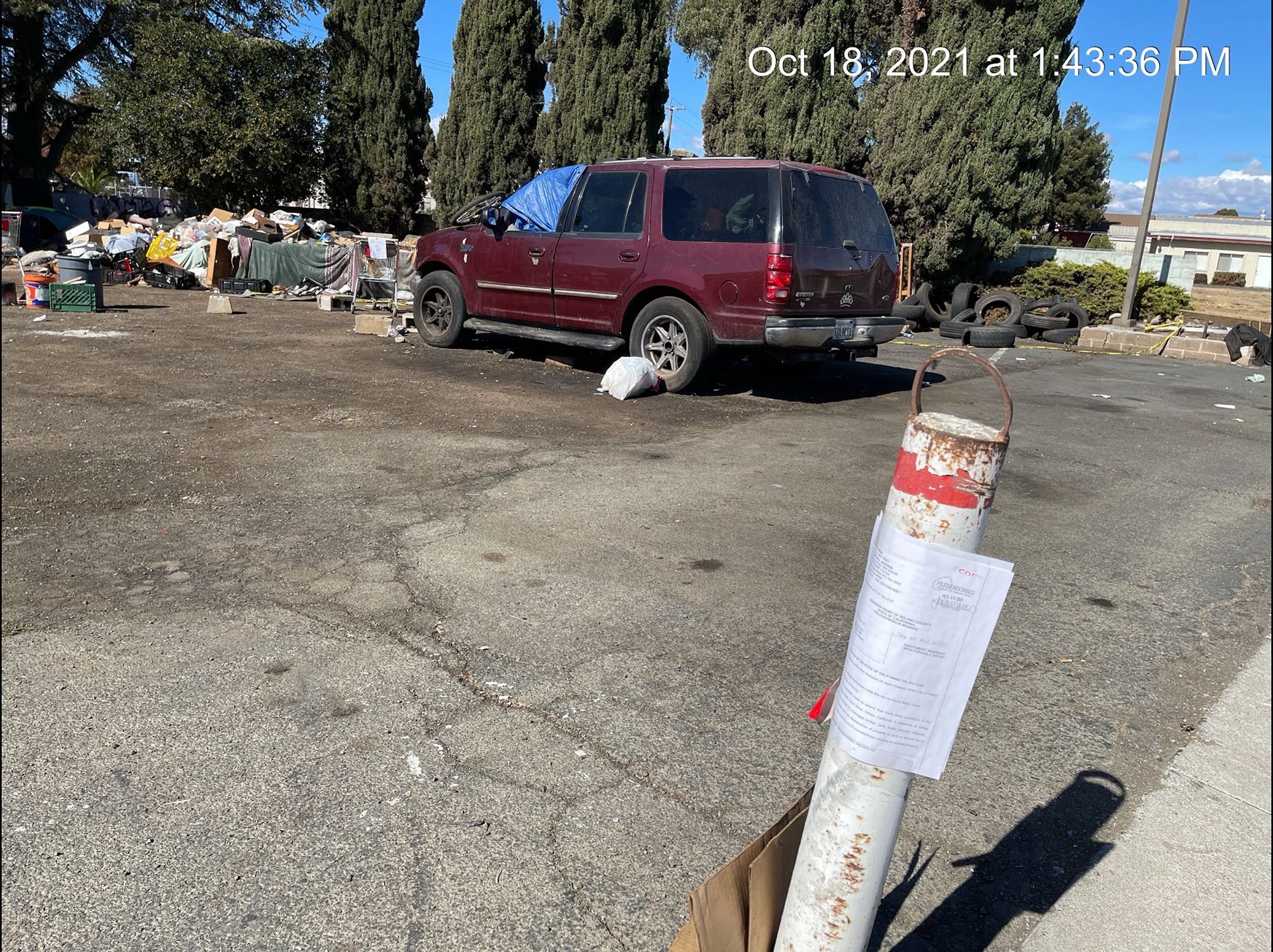 A photo taken by a city of Vallejo employee of an abatement warrant left at a homeless encampment on Couch Street last year.

VALLEJO – The city of Vallejo is suing a property owner to remove people experiencing homelessness from an encampment, one of several similar legal fights the city has escalated to remove people living on private property.

The lawsuit, which has not yet been accepted in Solano County Superior Court, seeks to force the owners of 505 Couch St. to remove more than 30 people experiencing homelessness currently living there.

The legal action is one of several recent examples of the city of Vallejo targeting property owners to remove people living on their property.

The city can use police to evict people who are living on city-owned property, but not on private property. So instead it fines property owners who allow homeless people to live on their land until they either remove them or allow the city to remove them.

But the city has also been criticized because people experiencing homelessness have few options and few services available. Shelters are often full, the city’s homeless navigation center project has been stalled for years and no longer even has a proposed location, and its Project RoomKey program to put vulnerable homeless people in hotel rooms during the pandemic ended earlier this year. Records and interviews have since revealed that the conditions in the Project RoomKey program were filthy and unsafe, but the city ignored warnings to address them.

The city is expected to open a new permanent supportive housing project on Sacramento Street and is in the early stages of another project slated to be built on Broadway. But the Sacramento Street project won’t open until January and already demand for its housing has far exceeded supply. The Broadway project likely won’t be ready for years.

Meanwhile, the Couch Street lawsuit is a significant escalation of legal action against a property owner that has not taken steps to remove people living on their property. It argues that the property is a “public nuisance” that endangers “the health, safety and welfare of the public as well as the individuals currently occupying the property.” The draft petition states those nuisance conditions include “the accumulation of garbage, graffiti, presence of unregistered and/or inoperative vehicles being stored on the property, unauthorized camping on private property in view of a public right-of-way.”

City code enforcement officers have been investigating the property since January 2021, according to the draft petition. It identifies 13 enforcement actions since then, including an abatement warrant and surveillance by Vallejo police Sgt. Jodi Brown. But the city said that the property owner took no abatement steps. It said trash piled up, there were fires on the property, and human waste was not properly disposed of, among other complaints.

The property owner is WFG Liquidation Corporation, which is one of hundreds of subsidiaries of Service Corporation International, a Texas company founded in 1962 which describes itself in U.S. Securities and Exchange Commission filings as “North America’s largest provider of deathcare products and services.” It operates 1,471 funeral service locations and 488 cemeteries in 44 states, eight Canadian provinces and Puerto Rico, including 158 funeral service locations and 39 cemeteries in California, the SEC filings state.

According to the petition, city officials left a draft of the petition at the Couch Street property on July 29 as part of a legal requirement to give the property owner notice before filing. The suit was announced on a city council agenda this week.

The city also recently threatened to fine a property owner unless they removed people who were living behind a Smart and Final store, leading to their eviction. The store is located on Sonoma Boulevard and the end of Sereno Drive, in the White Slough area.

The city has previously forced the property owners, Robert and Lori Chiang of San Francisco, to remove people living in the vacant lot behind the grocery store. It sent a warning notice to the owner in February 2021 for trash and debris on the property and unauthorized camping, warning of fines if the property owner did not take corrective action. In an email to a city code enforcement officer in March 2021, Lori Chiang said the “property cleaning work is completely finished.”

But people returned to live on the property and the city sent another warning notice in March of this year for the same violations and threatening fines. This time the city followed up in June with a fire inspection report, which threatened fines if the owner did not cut weeds to no more than two inches from the ground. In late June, the city conducted a “debris removal” on a nearby dead-end street, which prompted some people who had been living on city property to move to the private property behind the grocery store, where about 10 people were already living.

City officials returned to the area behind Smart and Final with the owner this month to tell the remaining people to leave, according to witnesses. Homeless advocate Joey Carrizales said that he was present on Aug. 16 and witnessed Vallejo Deputy City Attorney Hampton Jackson and police Sgt. Kyle Wylie threaten the people living there with arrest. Jackson “told everybody that they must leave or they will be under threat of arrest,” Carrizales said. Most people voluntarily left the property after that, he said.

The city also threatened to fine a property owner in South Vallejo to remove people from an area that the city had previously considered as a site for a tent city. The property at 1140 Fifth St. is owned by Richard and Emily Fisher, who operate the nonprofit 4th Second. The city sent them a warning notice on April 1, threatening fines because of junk and debris, overgrown weeds, and unauthorized camping.

The Fishers had offered the property late last year as a site for a potential “Hope Village,” a tent city of 40 tents and four Porta-Potties that would house people exiting the Project RoomKey program. But the city rejected the suggestion because the property did not have any drainage, paving or access to electricity, water or gas. Richard Fisher did not respond to a request for comment.

At least one property owner has said they would allow people to live on the property if the city didn’t impose fines. When a group camped on a vacant lot off Sonoma Boulevard next to Vallejo Furniture last August, code enforcement officers sent property owner Param Dhillon a letter threatening him with fines. Dhillon told the Vallejo Sun last year that he had no problem with people living there but didn’t want to be fined. The people left after the land flooded in torrential rains in October.