Protesters confronted Vallejo Police Chief Shawny Williams as they alleged that he has no power to reform the department.
Share this news on: 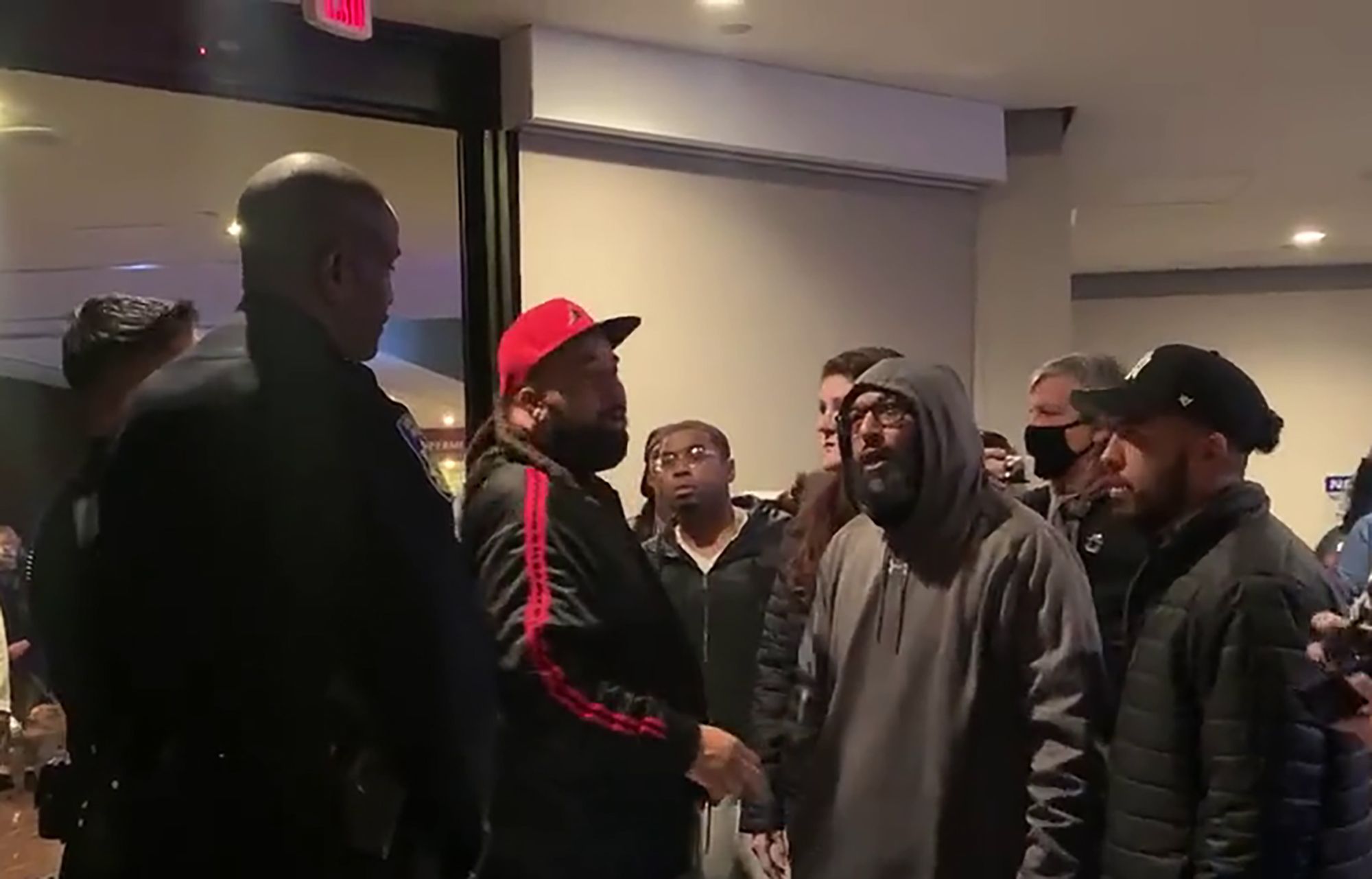 VALLEJO – Following a protest that briefly shut down its meeting that began Tuesday evening, the Vallejo City Council voted in the early morning hours to continue the discussion of asking the state for a $30 million loan to retrofit the proposed police headquarters located along Vallejo’s waterfront until next month.

Family members of men Vallejo police recently killed showed up to demand the city fire officers who bent their badges following a fatal shooting to celebrate the occasion. They also came to demand the council reject a plan from staff to seek a $30 million loan through the California Infrastructure and Economic Development Bank (IBank), to fund, design and retrofit work for 400 Mare Island Way, a pristine two-story building on the city’s waterfront. Vallejo purchased the property in early 2019 for $13 million.

The meeting came to a halt about 20 minutes after it started when Vallejo Mayor Robert McConnell asked David Harrison — cousin of Willie McCoy, who Vallejo police shot and killed in 2019 — to stop talking loudly in the back of the council chambers. That caused other impacted family members to begin shouting as McConnell called for a recess.

The families confronted Vallejo Police Chief Shawny Williams as they alleged that he has no power to reform the department. They also questioned him on why his office has yet to release a completed report on the badge-bending practice, which he has previously acknowledged had been occurring for years.

In the 6-1 vote, with council member Hakeem Brown opposed, the council agreed to move the loan discussion to the first council meeting in April to give city staff time to work on finding alternate locations for the city’s police headquarters. The council also directed staff to return at the same April meeting with a resolution giving the council the ability to create either an ad hoc committee composed of just council members or a community working group that will work on the next steps of finding a suitable location to serve as police headquarters.

Prior to the council meeting, families impacted by Vallejo police violence held a rally on the steps of city hall demanding justice for their loved ones.

“I want to know what’s going on with this bullshit investigation,” Sullivan said about the badge bending report. “I want their ass in jail or hell — those are the only two options they got. Until God takes my breath out of my body, I’m not going to stop.”

Sullivan said Foster was executed when he was tased, beat and shot in the back and the back of the head by then-Vallejo police officer Ryan McMahon on Feb. 13, 2018.

Following the shooting, McMahon told investigators that he first saw Foster riding his bicycle in downtown Vallejo and had attempted to stop Foster and “educate” him about bicycle safety.

Foster, who was unarmed, fled on his bicycle, abandoning it as he ran behind buildings in the area. He fell along a walkway behind a building on Carolina Street and that’s when McMahon caught up to him. During a struggle, McMahon alleged that Foster “forcibly removed” a flashlight from the officer’s hands. McMahon said he feared for his life, as he shot the father of two seven times.

“Ronell is the Emmett Till of 2018,” Sullivan said. “I believe in an eye-for-an-eye. I want a life-for-a-life. I’m going to get it. My family is devastated.”

A year later, McMahon was one of six officers involved in the fatal Willie McCoy shooting.

The six officers fired 55 rounds at McCoy in about 3.5 seconds after he was found unresponsive  in the driver’s seat of his silver Mercedes outside a Taco Bell. McMahon was subsequently fired for violating three of the department’s policies: unsafe weapons handling, unsafe work practices, and unsatisfactory work performance during the McCoy shooting.

Later Tuesday night, the council meeting came to a halt as impacted family members were able to have an impromptu audience with the police chief.

“The police union runs this whole city. You have no power to change none of this shit,” McCoy yelled at Williams, who stood silently in the back of the council chambers. “You work for the union. They tell you what to do. If not, you would have released the badge bending report. Don’t put it on the city attorney to do what's right.”

Last July, an attorney for the city of Vallejo told a Solano County judge that the report would be completed in September, but the city attorney’s office had not responded to requests from the department to release the report.

This took place as Sullivan yelled “murderers” at Williams and three other officers who were also standing in the back of the chambers.

The commotion eventually calmed down as the impacted family members and their supporters left the chambers.

“I'm so pissed off, I don’t know what to do,” she said, adding that some council members were laughing during the disturbance saying, “It’s the most disrespectful thing I’ve ever seen. These families are in pain.”

Sowonde said it was time for things to change in the city.

Sowonde also spoke about her 15-year-old son.“I want to make sure that brother walks away when he stands in front of a police officer,” Sowonde added.

Following public comment, McConnell directed the city manager and city attorney to prepare a staff report on the status of the investigation into badge bending.

Brown, too, said he wanted to update on the badge bending report.

“Though it was a pretty heated situation, I think I can understand the families being very upset when it comes to badge bending,” Brown said. “In Black and Brown communities, there’s already a concern about whether people are being unfairly targeted. When you hear about badge bending and swastikas, you definitely realize where there's smoke there’s fire.”

District 6 Councilmember Cristina Arriola said later in the meeting that she stands with families impacted by Vallejo police violence. “I am with the community and this vote is for the community,” she said. “Taxpayers and the people of this city do not deserve this burden on them for the future.”

When the council took up the proposed $30 million loan to renovate the new police  headquarters, most of the discussion centered on if the city could identify alternate locations. City staff, councilmembers, and  residents agreed that the department’s current  location at 111 Amador can no longer support police operations. It was constructed in 1961 and has an antiquated HVAC system, asbestos, lead, and lacks sufficient backup power generators.

District 3 councilmember Mina Loera-Diaz presented her own report and recommendation about forming a working group composed of councilmembers, city staff, and community members that would work on recommending alternate sites for the new HQ and identifying funding sources.

That plan garnered the support of Councilmember Pippin Dew, at large.

McConnell argued that the proposed loan was “bad financial planning” and a “rushed deal” with the city not doing its due diligence. He also addressed some concerns brought up about the waterfront area being flooded over the next century due to climate change. He said the city might need to build a wall around the waterfront area to prevent flooding.

McConnell also argued that the loan will cause a structural deficit as the city attempts to make its debt service payments. The interest rate for the loan is expected to be between 2 or 3% with debt service payments of $1.6 million annually for 30 years, staff wrote in a report to the council.

“This particular vote tonight is going to be a legacy vote you will be remembered by it for eternity,” McConnell said. “We will tie the hands of the future councils for at least 30 years to not use the money that must be paid for the retirement of this obligation. I cannot support such a position.”

Much of the time was reserved for public comment, as about 40 in-person and online speakers addressed the council. Many opposed the idea of moving the police department into the building, questioning if it was the right fit and also the finances around it. Other community concerns included having a heavy police presence on the city’s waterfront to the possible danger of speeding police vehicles as they respond to calls for service.

While the funding for retrofitting has yet to be approved, Vallejo police have been using the building for nearly two years. Department spokesperson Brittany K. Jackson confirmed to the Vallejo Sun last month that the department’s investigations bureau, detective division, and professional standards division have all been housed inside the building since May 2020.

Some in the community have expressed frustration that the city didn’t do its due diligence when looking at other possible sites for the new police headquarters. Interim City Manager Mike Malone previously said the city looked at using the John F. Kennedy public library building, but an assessment found that the cost for a retrofit would be equal or greater than 400 Mare Island Way.

Malone also previously said the city also looked at the former Wal-Mart building along Sonoma Boulevard, but the “site is privately owned and not currently zoned correctly, nor is it currently for sale.”

Another site along Rollingwood Drive, which is currently home to unused little league fields, would cost the city $74.6 million to build a police headquarters at that location.

Meanwhile, Brown, a longtime supporter of providing a new police headquarters, said the loan was about keeping the city safe.

“This is not a vote on police behavior,” Brown stressed. “This is a vote on, to me, whether we want to keep our community safe.”