The four men vying to represent District 4 introduced themselves during a candidates' forum hosted by the St. Vincent’s Neighborhood Coalition on Saturday.
Share this news on: 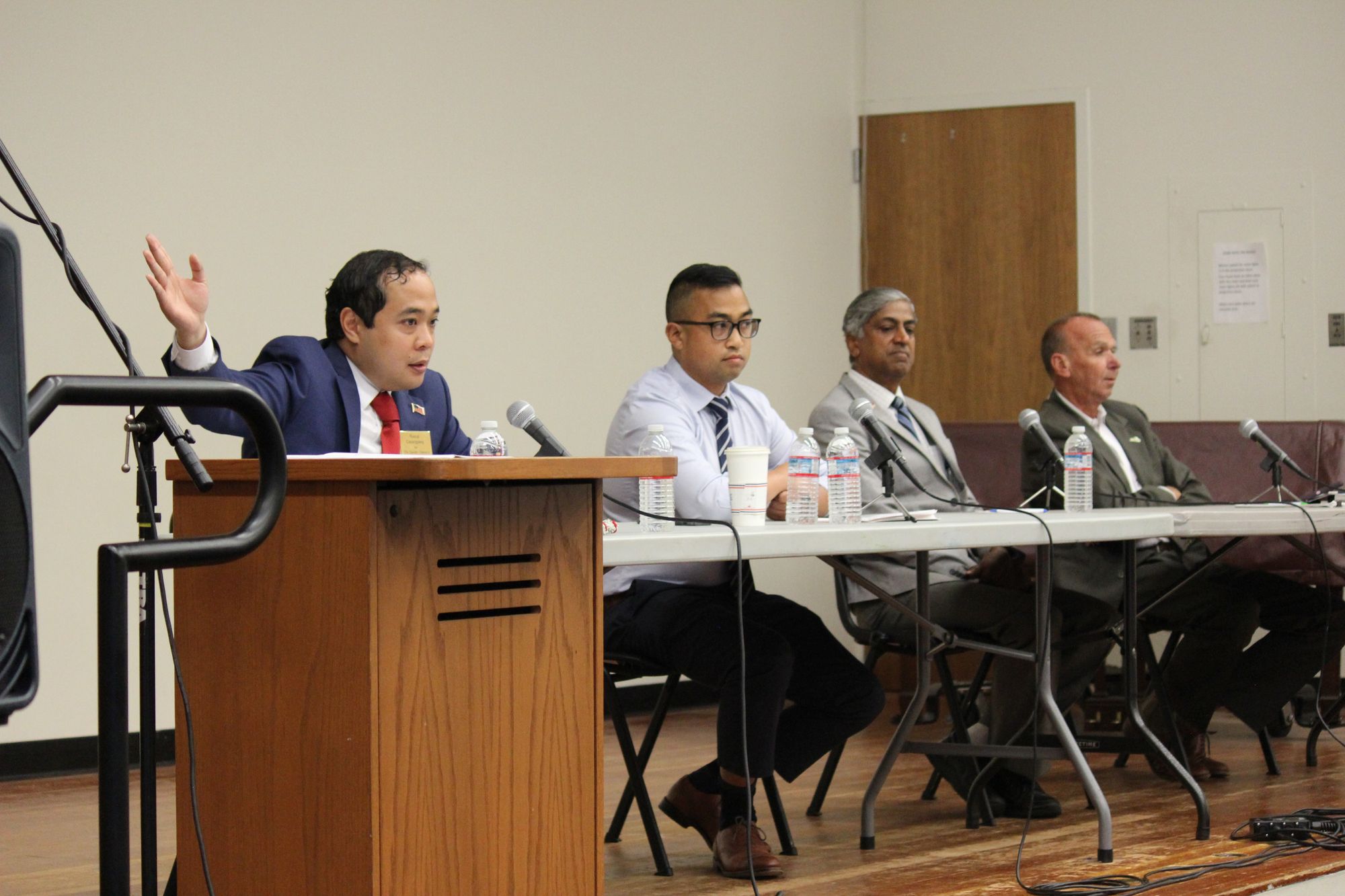 VALLEJO – In less than three months, Vallejo residents living on Mare Island and most of the west side will go to the polls, picking the first person to represent their newly-created city council district. The four men vying to represent District 4 introduced themselves during a candidates' forum hosted by the St. Vincent’s Neighborhood Coalition on Saturday.

The election is the first for the district since Vallejo moved to district-based elections from at-large seats in 2019.

During the forum, candidates Ruscal Cayangyang, Charles Palmares, Ravi Shankar, and Chris Platzer addressed numerous topics from police reform, how to address homelessness in the city, and their stance on Measure P, a seven-eighths-cent sales tax that will go before the voters this fall.

On the topic of the sales tax, all but Platzer said they opposed it.

“No more new taxes, people have suffered enough during the pandemic and beyond,” Shankar said. “Why does the city manager and the staff want to waste so much money spinning their wheels again, to get defeated and get their face in the mud again, didn't they learn anything from the past effort?”

Measure P is general transaction and use tax, which if passed, is estimated to generate $18 million annually for the city’s coffers. A divided Vallejo City Council voted on July 12 to put the measure on the November ballot as officials seek additional revenue to address numerous issues in the city, including homelessness, blight, and illegal dumping, as well as to fix city roads, provide fire and police protection while also “keeping public space healthy/safe/clean.”

This will be the city’s second recent attempt to generate more revenue through a sales tax increase. Vallejo voters barely rejected Measure G, a similar general sales tax measure on the ballot during the November 2020 election.

Both Palmares and Cayangyang expressed concerns on how the money would be spent.

“It's just gonna go into a black hole into the general fund,” said Cayangyang. Palmares said if the city was “going to have a tax, let's be sure about where it's going.”

Platzer didn’t take an official position, stating that it was up to the voters to decide if they wanted to support the tax measure.

The four men were also asked about whether they supported converting the two-story building on the waterfront at 400 Mare Island Way into a new police headquarters.

Shankar, Palmares, and Cayangyang all opposed its use by the police.

Calling it a “dollars and cents issue,” Palmares said the property could generate revenue for the city. “It's more optimal that they're centrally located, and don't have to be at the waterfront,” he added.

Platzer, who supported the relocation, said “policing is an activity, not a location,” stressing that Vallejo police need a new public safety building to replace the one the aging building they currently occupy at 111 Amador St.

Following extensive protests over the proposed move, the Vallejo City Council directed city staff in April to begin looking at the possibility of moving the department from its aging facilities to the John F. Kennedy Library in downtown Vallejo. Other concerns about the property have been raised, including how it will fare as sea levels rise, and what the renovation costs will be.

The council candidates were also asked about their stance on reforming the police department, which has been inundated with controversy, including some officers bending the tips of their star-shaped badges after an on-duty shooting. The candidates said they support creation of a police oversight model. They also addressed other ways to reform the department.

“As far as police reform in general, one thing I do want to support is more training,” Palmares said, adding that he wanted officers to rely on “muscle memory.”

Meanwhile, Cayangyang said he wanted more drug testing of officers and have the city establish a community outreach team to address mental health or domestic violence calls. He also said that he supports moving funding away from the department.

“We have to cut the cost in the police department to reallocate the money into public works because they're understaffed and underfunded,” Cayangyang said.

Shankar said the department shouldn’t “yield to the tantrum of the police unions, they have an obligation to serve the public and safeguard number one, that's why they're paid a lot of money.”

The candidates were also asked about housing and the state of homelessness in Vallejo.

Palmares said the best way to address the issue is to “attract the developers that can build the housing for the unhoused,” which he admitted won’t be an easy task.

“Vallejo is not exactly the most desirable place to develop,” Palmares added.

Platzer also said it was a difficult problem that he didn’t know how to solve.

“It's easy to say that housing is a human right,” Platzer said. “But it's equally true that the solution to homelessness is housing.  And it could also be a solution to some of the crime in this town.”

Platzer advocated for the city to turn on two water fountains in the downtown so the unsheltered have access to water. He also said the city should think of placing a public restroom outside.

Cayangyang said he’d like to see a tiny house village built and for the city to find a place to allow RV parking. He also brought up the controversial homeless navigation center that has been hit with numerous delays.

City officials revealed last November that the city doesn’t have a firm date on when the proposed 125-bed navigation center will open to serve the city’s unsheltered residents. There continues to be a several million dollar funding gap which needs to be filled before the shelter can be built.

An environmental report done on the original proposed site at 5 Midway St. discovered the intended site for the center was unfit for human habitation.

“It's been mismanaged, and money wasted down the drain. Do you trust city management to handle homelessness? No, I do not,” Cayangyang said. “That's why we need to get the county and state to intervene because they are better equipped. They have the resources and they have the infrastructure.”

Shankar said homelessness was the number one issue in the city.

To begin the forum, each candidate introduced themselves and explained why they should be elected to represent the district.

Palmares, a current planning commissioner, said he is a Vallejo native and military veteran who would be able to fill the leadership gap in the community.

“You know, and I don't want to engage in the culture where we're just talking about this didn't happen, we should have done this,” Palmares added. “I want to be that leader that's going to actually fix these problems.”

“And the last thing, the last reason you should vote for me is I'm a big believer in accountability,” he said. “Most especially for myself. If I'm wrong, tell me I'm wrong. I will own all the problems in the city. I will be a failure until I fix them.”

Platzer, a graduate of California State University Maritime Academy in Vallejo and licensed third mate, is making his second run at the city council. He ran and lost in 2013 while touting redeveloping Mare Island as a regional port facility, which he said would have created thousands of jobs.

Platzer is also a former member of the planning commission but resigned his seat in April 2020 for throwing his cat and drinking while participating in a commission meeting over Zoom.

He didn’t shy away addressing the incident, saying that he “spent four years as a planning commissioner, we all know how that went,” which provoked laughter from the audience.

Platzer is a strong supporter of fiber optics and broadband, arguing that the city should use conduit installed around the city to generate revenue.

Meanwhile, Shankar, a 19-year resident, has extensive volunteer and community experience. Over the past 12 years his volunteerism includes working with Participatory Budgeting, being active with the Sister Cities program, serving as a board member on the Vallejo Naval & Historical Museum, and on the Chief’s Advisory Board, becoming a member of the Solano County Library Foundation Board of Directors, and being involved with the community gardens on Mare Island.

Cayangyang is a former Vallejo school board trustee and member of the now-defunct Youth Commission.

Claiming he “will not be bought or influenced by any special interest,” Cayangyang outlined his goals, if elected.

“City Hall has been ignoring the residents for too long,” he said. “If we continue business as usual, we face the risk of bankruptcy and worsening roads. With my years of experience in government, listening and working with residents, and speaking up for people who are hesitant to attend a council meeting, I will introduce much-needed changes.”

He said those changes would include fixing the city’s roads and stopping wasteful spending and government mismanagement.

District 4 residents are also planning two coffee with the candidates events at 10 and 11 a.m. on Aug. 20 and 27, where district residents will get to meet each candidate and ask them questions. The chats will be held at the St. Vinnie’s Community Garden, located at Marin and Ohio streets.