The comments came during a candidates’ forum hosted by the 411 Series Vallejo Seeking Solutions group held at the Griffin Drive Church of Christ on Saturday.
Share this news on: 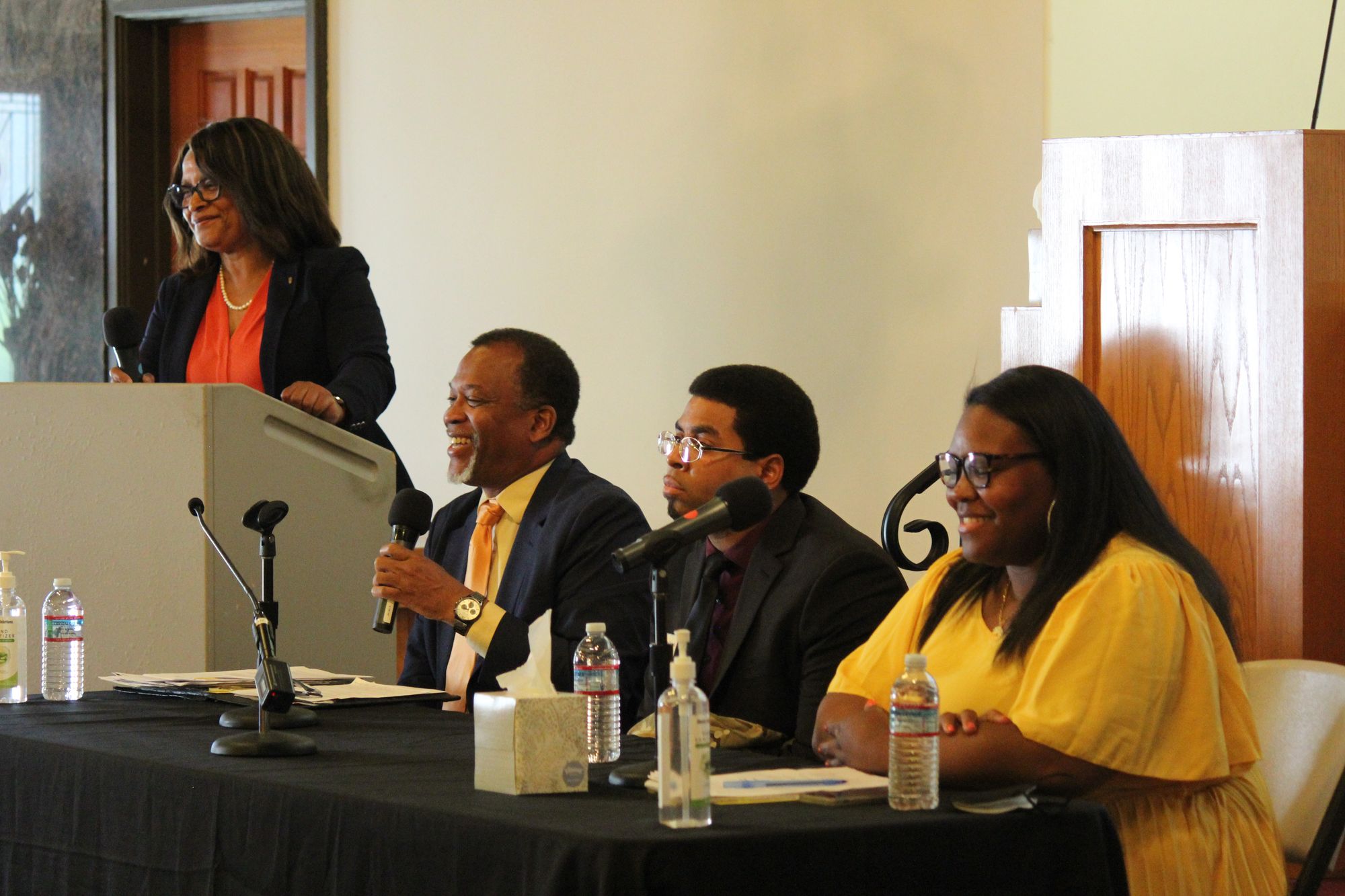 VALLEJO – Three of the candidates vying to represent District 2 on the Vallejo City Council want to see the city change to a strong mayor form of government in which the elected mayor would serve as chief executive instead of a council-appointed city manager.

“So where does that put us?” Jordan asked. “I’m for a hybrid where the mayor has the ability to fire the police chief, the public works [director], as well as the city attorney, and he has to do it in conjunction with the city council, but he's the one that can initiate.”

Jordan admitted that “a lot of people don’t want the mayor to have that kind of control, but we've gotten to the point now where we're sick and tired of being sick and tired.

“Something has to change,” Jordan added.

Community advocate Garrett Toles said he supports a hybrid model to ensure the city doesn’t “get a dictator in there” and “actually knows the government.”

“At the moment, we do have [City] Manager [Michael] Malone and we have Mayor [Robert] McConnell and I think right now they work well together,” Toles added. “But after that, we may need to change the charter.”

The trio were also asked their opinions on what type of reforms are needed for Vallejo. All mentioned police reform with Jordan demanding a change within the Solano County District Attorney’s Office.

“The DA has not prosecuted one police officer for involved homicide in the eight years she's been in office,” Jordan said of DA Krishna Abrams. “So we can come here and yell, shout, scream, and protest, but until we get the DA to change her mind, it's not going to happen.”

The moderator of Saturday’s forum was former Chief Assistant District Attorney Sharon Henry, who challenged Abrams for the DA position in June. Abrams decisively won all but about 50 of more than 800 precincts in the county, according to an analysis conducted by the Vallejo Sun.

The city council has begun discussing the creation of a new police oversight board that would reform the beleaguered police force. The form of what the oversight board will look like has yet to be determined.

Jordan said that the Human Relations Commission pushed for a police oversight board 20 years ago.

Toles said the police department “had a spree in which Black and Brown men were targeted for say about 10 years, ever since [police officer] James Capoot died.” Capoot was shot to death in late 2011 while pursuing a robbery suspect. The following year, Vallejo police shot and killed six men, three of which were killed by one officer, Sean Kenney.

“We have to make sure that the people that are protecting us and serving us are actually out there, doing what they're supposed to be doing,” Toles said. “Not terrorizing the community, not harassing the community.”

“We need more pride. We need more unity,” he said. “We need to ensure that we all are on the same page so that we can reform the city together.”

James said another reform should be the city looking at its relationship with the region.

The candidates were asked about whether they support Measure P,  a proposed seven-eighths-cent sales tax increase that residents will vote on this fall.

James, a mother of two, said she supports the measure after not supporting Measure G, a similar three-quarter-cent sales tax increase that residents narrowly rejected in November 2020.

“In these two years, I didn't see any difference on how we went out to increase funding, how we went out to partner with the county or state to bring in revenue into the city,” James said. “That's what was one of my decisions to support Measure P this time. At this time, I want to level the playing field for my kids.” James also said that if approved, a citizen’s oversight board would be established to monitor all spending associated with the new revenue.

Both Jordan and Toles said they had concerns with Measure P.

“I think it's an extremely regressive tax sale for North Vallejo, and South Vallejo,” Toles said.

Jordan said the “citizens of Vallejo have no vote of confidence for the city council and the city manager.”

They were also asked what the needs are for the district with Toles highlighting jobs and after-school activities for kids as top priorities.

“A lot of them, unfortunately, don't really have the foundation, they don't have the backing that I had,” Toles said “I went to private schools, and I had my from my family there, I had a stepdad but he did his best to ensure that I did have a man a father figure.

Toles said a Big Brothers, Big Sisters program could “at least” help provide local kids mentors and “ we do need the Boys and Girls Club back.”

Toles also advocated for “housing and creating more of a community benefits package for incoming businesses.”

James said that when she knocked on doors in the district, “housing, unhoused programs, and basically our infrastructure and streets” were the top issues.

“We have a lot of programs in the district, but they don't get city funding. It is focusing or reallocating some of the city resources to the district and making sure that the district has access to some of that funding and some of the programs,” James said. “And also it's very loud when we don't have anything that's happening within our community center across the street.

Jordan said that while doing similar knocking on doors he said potholes, poor streets, increasing garbage, sideshows, and the unhoused were top issues reported to his campaign. Jordan said he supports giving residents a $500 per month stipend based off of the pilot program implemented by the city of Stockton.

“Because a lot of people are one paycheck away from losing their apartments and losing where they live,” Jordan said.

The candidates were asked how they are going to honor their platforms once elected to the seven-person council.

“It's simple, you just do what you said you're going to do and ensure that all promises that you put in the play, you actually follow through,” Toles said. “Far too many times, there's just too many broken promises and we need to shy away from that. We just need to make sure that our ways to move the city forward are realistic, and we're not just telling people what they want to hear.”

James said that her “platform is accountability, equity, and community.”

Meanwhile, Jordan said his reputation is “everything to me” having lived in Vallejo for 32 years.

“And when you stay someplace for a long period of time, you get to know a lot of people and you don't do what you say you’re going to, those people will beat you up,” Jordan said laughing. “So if I get on city council, you will have somebody that's been tested, that's been tried. And his word is, what we used to say back in the day, my word is my bond.”

The city switched from citywide council elections to district-based elections in 2019, and this is the first time District 2 will be represented on the council.