Solano County District Attorney Krishna Abrams and Sheriff Tom Ferrara won their respective races for reelection in June with broad support in all areas of the county.
Share this news on: 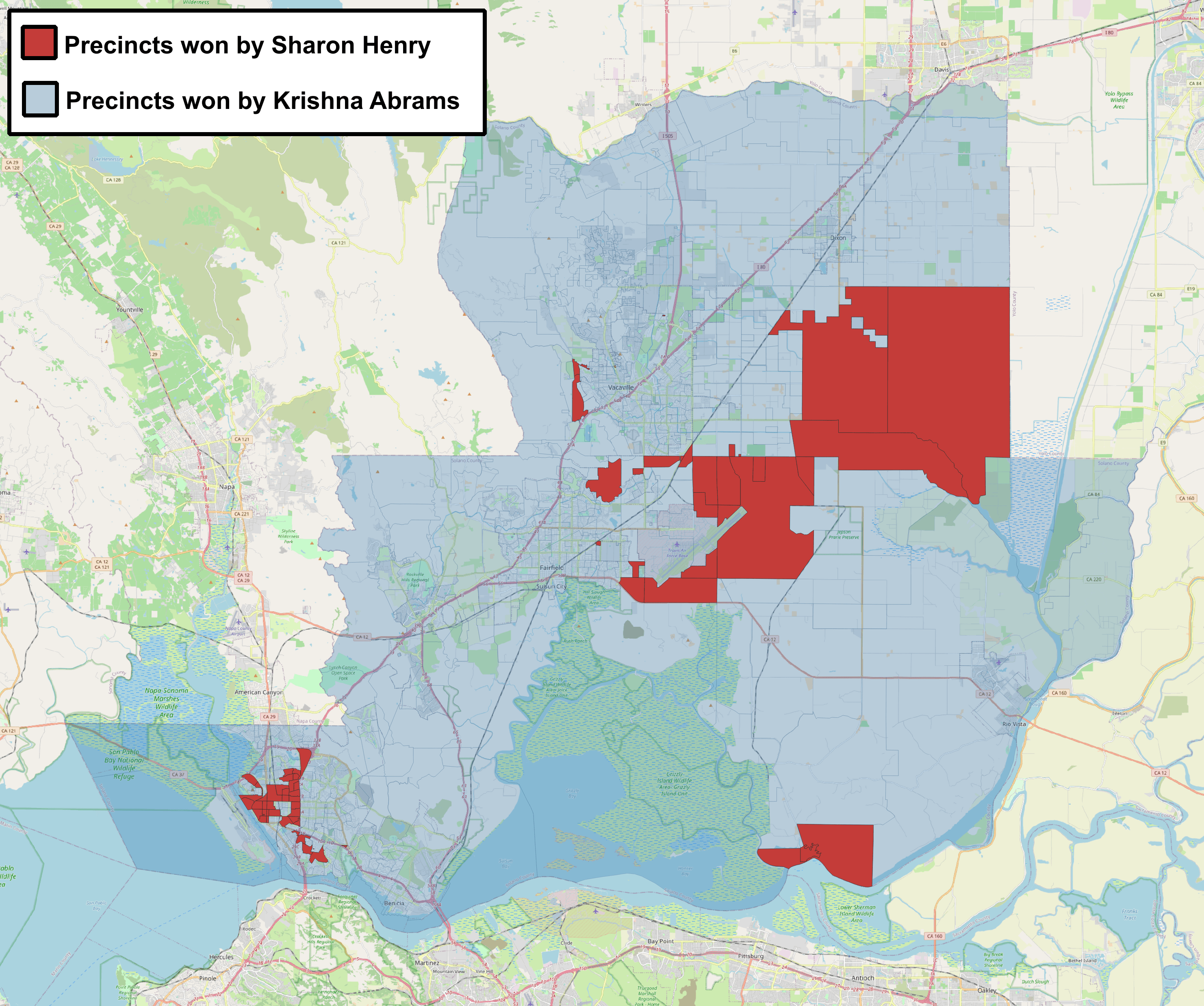 Results of the June 2022 district attorney's election in Solano County. Data via the Solano County Registrar of Voters, graphic by the Vallejo Sun.

This story is part of a project called Democracy Day, in which newsrooms across the country are shining a light on threats to democracy and what action is needed to protect it.

FAIRFIELD – Solano County District Attorney Krishna Abrams and Sheriff Tom Ferrara won their respective races for reelection in June with broad support in all areas of the county, but voter turnout in the election was low, even for a June primary outside of a presidential election year.

An analysis of precinct data and voter turnout data by the Vallejo Sun shows that Abrams won all but about 50 of more than 800 precincts in the county, handily defeating her opponent, then-Chief Deputy DA Sharon Henry. Abrams received 59% of votes cast overall.

According to election data from the Solano County Registrar of Voters, Henry only received a majority of votes in a large portion of western Vallejo and a few rural precincts, some with only a handful of voters.

Henry announced her candidacy in February, saying she was running because she felt that Abrams had abdicated her responsibility in refusing to investigate two controversial Vallejo police shootings, had failed to respect the rights of crime victims, and had mistreated staff.

Prior to running against Abrams, Henry sued the county, alleging that Abrams discriminated against her by not making reasonable accommodations for her to work remotely during the COVID-19 pandemic as she had health conditions that made her more vulnerable if she was infected. Shortly after the election, Abrams fired Henry.

Ferrara fared even better against his opponent, retired sheriff’s Deputy Daryl Snedeker, as Snedeker did not carry a single precinct. Ferrara beat Snedeker by a two-to-one margin, with 67% of the vote.

Snedeker filed to run just before the deadline. He had previously challenged Ferrara in 2018 and came in third in a three-way race. In both elections, Snedeker ran on a platform of improving mental health services and drug treatment throughout the county and advocated for adding more services to the jails.

While the two incumbents won decisive victories, turnout in the election was low, even for a June primary held outside of a major national election. Overall only about 30% of registered voters cast ballots in the June election.

Typically, June primary elections have lower turnout than elections in November, and turnout is higher during years when there is a presidential race on the ballot.

For example, in the November 2016 election, featuring the presidential contest between Donald Trump and Hillary Clinton, 48% of registered voters cast ballots in Solano County.  When Joe Biden ran against Trump in November 2020, the election had unusually high turnout nationwide, including a massive 81% of voters in Solano County. Midterm races in November 2014 and 2018 had 45% and 64% turnout, respectively.

Some cities in Solano County had higher turnout than others in June. Vallejo had the lowest turnout in the county with 26%, followed by Suisun City with 27%, Fairfield 28%, Dixon 28%, Vacaville 32%, Benicia 41%, and Rio Vista had the best turnout of all with 44%. Rio Vista and Benicia are two of the county’s smallest cities, along with Dixon and Suisun City.

The last time Ferrara and Abrams were on the ballot, in 2018, turnout countywide was 38%. That year, Abrams ran unopposed and Ferrara was challenged by Snedeker and Fairfield police Lt. Dan Marshall, besting both with 52% of the vote and avoiding a November runoff. Marshall announced a run for sheriff last year but ended his campaign before the filing deadline. He was recently named Fairfield’s next police chief.

Ferrara ran unopposed in his first election after he was appointed to the position in 2012 following his predecessor’s  retirement.