Four candidates vying to represent District 2 outlined their goals during a candidates' forum held at the Friendship Missionary Baptist Church on Tuesday.
Share this news on: 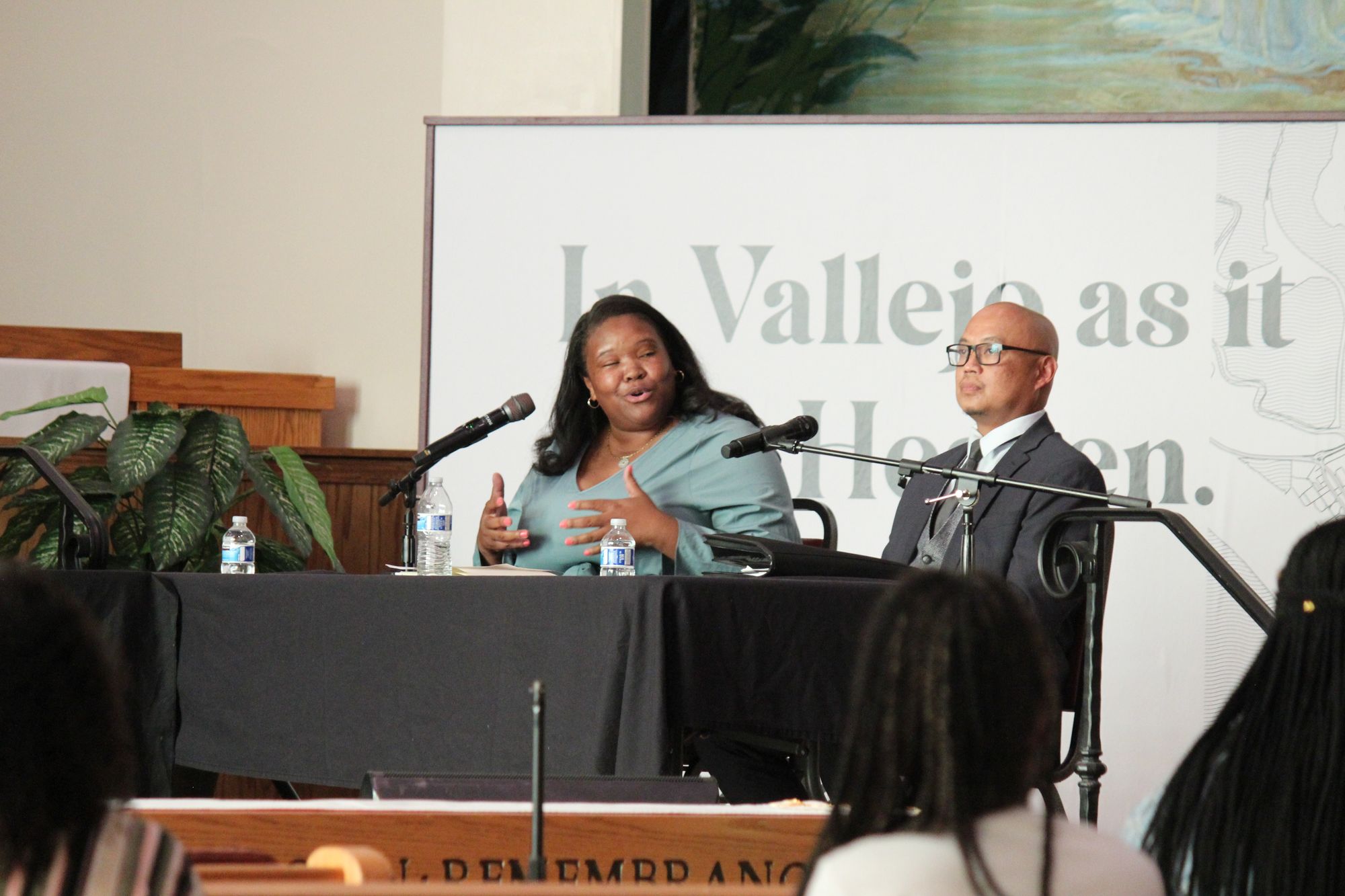 VALLEJO – Campaign season is in full swing as the four Vallejo City Council candidates vying to represent District 2 debated a number of issues affecting the city during a Tuesday night forum hosted by the African American Alliance.

Moderators Calvin Harrell, of the Community Democratic Club, and Planning Commissioner Peggy Cohen-Thompson peppered the four candidates with questions about their respective stances on various issues ranging from a proposed sales tax measure to police reform to the role of the city manager.

All four were asked to provide remarks and why they want to represent the district, located in North Vallejo.

“Over these last couple of years I have been disappointed with the city,” said longtime local realtor Don Jordan. “The city of Vallejo has gotten to the point now that long-term residents don't want to live here anymore. I decided I was going to die in this city, and when I made that decision, that’s when I decided to run for office.”

Cassandra James, a community development specialist for the city of San Francisco, said she decided to run after  asked one of her sons asked her “what can we do” following the death of George Floyd, whose murder by a Minneapolis police officer sparked widespread protests in 2020.

“As a mother who has worked in historically excluded communities throughout the Bay Area and currently organizing with some Vallejo organizations, in addition to my own lived experience within these current systems, it gives me a unique perspective and understanding of when to step up and when to pull others with me,” James said.

Community advocate Garrett Toles, who was an organizer behind the “Potholegate Vigilantes,” a rogue group that filled potholes without the city’s permission, said the city is suffering.

“Vallejo’s residents’ quality of life is being jeopardized daily due to uncontrollable factors such as crime, poor infrastructure, sideshows, the lack of housing opportunities, the lack of job opportunities, lack of resources,” Toles said. “And [by] a citywide drought on extracurricular activities and programs for the youth.”

Diosdado “JR” Matulac, a city of Vallejo planning commissioner, spoke about his experience as one of the main reasons he should be elected to the seat.

“What makes me stand out is my vision to change Vallejo with my near-decade of institutional knowledge,” Matulac said. “I want to start this by improving the Vallejo narrative by touting all the good that is actually happening here in Vallejo.”

He also highlighted that several current councilmembers have endorsed his campaign, including Vice Mayor Rozzana Verder-Aliga and councilmembers Hakeem Brown and Katy Miessner.

The candidates were split when asked about whether they support Measure P,  a proposed seven-eighths-cent sales tax increase that will be decided by voters this fall.

Matulac and James said they support the measure while Jordan and Toles expressed doubt if it was the right approach.

“Yes, I am in favor of Measure P because history proves that we can't rely on the state and the federal government to provide the funding that we need to help fix our city,” Matulac said. “So with this extra money this is going to allow us to do the things that we need to do here in the city of Vallejo.”

James said Measure P would “level the playing field for my kids.”

“I currently live in the [Country Club] Crest and our roads over there were not fixed by the pothole vigilantes, unfortunately,” she said. “So with Measure P bringing in $18 million dollars, we can focus that on housing and homelessness, [and] our infrastructure.”

Toles said he is leaning toward not supporting the measure, calling it a “regressive tax” that will impact District 2 residents more than other areas of the city. Toles expressed concern about what the money would go toward.

Jordan said he had questions on why Benicia, which is doing a similar tax measure this fall, focused on roads while Vallejo isn’t, despite having a need.

“I told them at city council if you want Measure P to pass it needs to be dedicated for the police oversight board and for the streets, you would get 65% but they didn’t do that,” Jordan said. “They said it’s going to the general fund and you’re going to have oversight. Ninety percent of the people in this room right now do not trust the city government.”

Vallejo’s Measure P is also a general transaction and use tax, which if passed, is estimated to generate $18 million annually. A divided Vallejo City Council voted on July 12 to put the measure on the November ballot as officials seek additional revenue to address numerous issues in the city, including homelessness, blight, and illegal dumping, as well as to fix city roads, provide fire and police protection while also “keeping public space healthy/safe/clean.”

If Vallejo’s measure is approved, a citizen’s oversight board will be established to monitor all spending associated with the new revenue.

The council candidates were also asked about police reform, which is another top issue facing the city as Police Chief Shawny Williams attempts to rehab the beleaguered police force that has killed 19 men since 2010.

James expressed her worry about the police department and its role in the community.

“I go back to the neighborhood that I live in, and I go back to the experience of raising two Black boys in a city with one of the deadliest police forces in California,” James said. “We have to acknowledge and be honest about what we currently have in our city in regards to our police department.”

James said oversight is needed to bridge the police and community.

Toles said he wants to independent oversight of the police.

“I think with the history of policing in Vallejo, it’s needed,” Toles said, adding that he thinks police officers are overpaid.

Last week, the Vallejo City Council held a workshop to gather feedback about the establishment of a new police oversight model. Most of the council said they wanted to see more of a plan from Common Ground, a non-partisan group of religious and non-profit organizations in Solano and Napa counties, which is advocating for a strong police commission based on the one in Oakland.

Matulac said more collaboration is needed between the community and police by changing the narrative and having conversations. Matulac said that will lead to the city hiring and retaining the kind of individuals the community wants serving on the police force.

Matulac was asked to expand on his thoughts about what he meant regarding changing the narrative.

“This is not an overnight thing,” he said. “You got to pick at it, take it a little piece by piece and you start out by actually talking about all the good that is actually happening here in Vallejo.”

Jordan was more blunt with his assessment, saying the city has a “police department that has a culture problem.” Jordan stressed that Williams was hired to break up that culture, arguing that the city needs to have a “come to Jesus moment” with the Vallejo Police Officers’ Association “and tell them this gotta stop.” He also advocated for independent oversight.

The candidates were asked about their opinion of the role of the city manager and city council.

Jordan said he supports a strong-mayor format in which the mayor becomes the city’s chief executive instead of a city manager who reports to the seven-person council.

James said the upcoming election will ensure the city council “will be truly equitable,” as each district will send a representative to the council. The city switched from citywide council elections to district-based elections in 2019, and this is the first time District 2 will be represented on the council.

“We have the opportunity to make sure that we send people to the city council that live in our neighborhoods in our communities,” James said.