Two claims name DA Krishna Abrams, as well as the two chief deputies in the office, Paul Sequeira and Sharon Henry, alleging they acted under Abrams’ orders.
Share this news on: 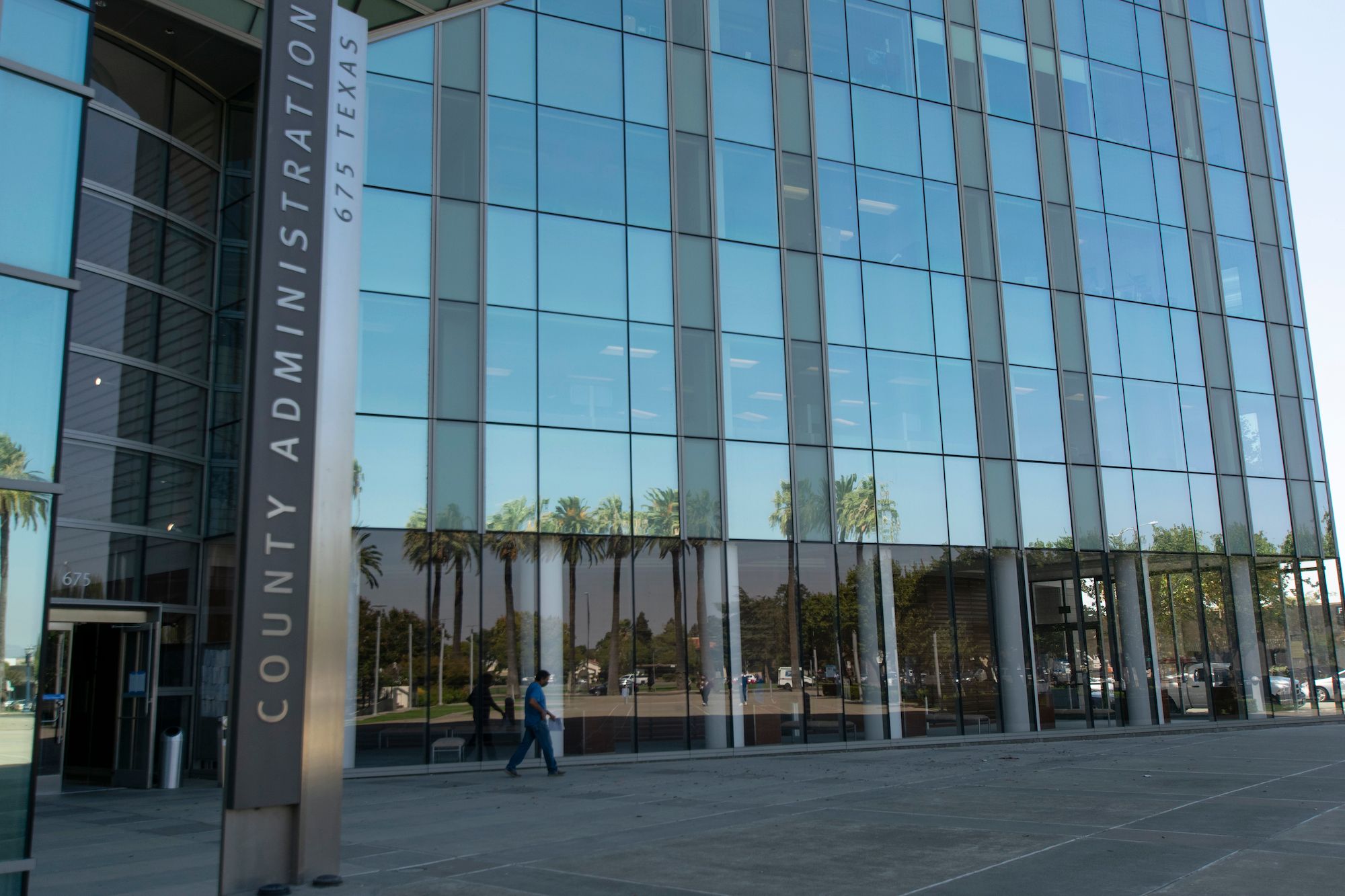 FAIRFIELD – Two former attorneys from the Solano County District Attorney’s Office filed claims against the county in 2017 and 2018, leading to settlements totaling $775,000, according to records obtained by the Vallejo Sun.

In 2018, Deputy District Attorney Karen Jensen alleged District Attorney Krishna Abrams discriminated against her for her disability, saying that Abrams disregarded her diagnosed post-traumatic stress disorder after she tried a member of the Family Affiliated Irish Mafia for murder four times, eventually securing a conviction that led to threats against her life. Jensen filed a lawsuit, which the county settled for $275,000 in 2019.

Months earlier, in 2017, Deputy District Attorney Teresa Ray — who was chief deputy DA but was demoted after Abrams was elected — alleged that Abrams threatened her and retaliated for her support of Abrams’ predecessor. The county settled Ray’s claim for $500,000.

The two claims name Abrams, as well as the two chief deputies in the office, Paul Sequeira and Sharon Henry, alleging they participated in the conduct while acting under Abrams’ orders.

Henry later sued the county herself, alleging that Abrams discriminated against her when she sought accommodations to work from home during the COVID-19 pandemic. That lawsuit is ongoing. Henry is now running for DA against Abrams in the June 7 election.

In an interview, Sequeira – who has made financial contributions to Abrams’ campaign – said that in both cases the DA’s office acted properly and disagreed with the county’s decision to pay the settlements, but said that the DA’s office had no role in those decisions.

Sequeira said that in Jensen’s case, the DA’s office followed the guidance of the county counsel and human resources department. In Ray’s case, Sequeira said she was terminated for withholding exculpatory evidence from a defense attorney, an allegation that Ray denies.

Jensen first worked at the Solano County DA’s office in 1997 as an intern, according to her lawsuit. When she passed the state Bar examination the following year, she was hired as a deputy district attorney. She was promoted multiple times and was Solano County Prosecutor of the Year in 2013.

When Abrams ran for DA in 2014, she sought Jensen’s support, but when Jensen declined to support Abrams’ candidacy, Abrams threatened her, according to Jensen’s lawsuit.

Jensen was one of the top homicide prosecutors in the county. In 2011, she was assigned a homicide case involving Joseph Verducci, a member of the Family Affiliated Irish Mafia or FAIM, an offshoot of the Aryan Brotherhood prison gang that originated in Contra Costa County in the 1990s.

Verducci was accused of shooting and killing a bystander, 30-year-old Jose Corona, outside a Vallejo bar in 2007 when he attempted to shoot Thomas Covey, a founding member of FAIM who had left the gang and was in a witness relocation program.

Jensen tried Verducci four times, with the first three trials ending in hung juries. The Daily Republic reported that Verducci made a “shooting gesture” at Jensen at the start of the fourth trial in 2013. When the guilty verdict was read, Verducci jumped out of his seat and shouted threats. Several bailiffs piled on top of him as he continued shouting. Verducci was sentenced to life in prison.

According to Jensen’s lawsuit, she had other threatening encounters with FAIM members during that time.

Jensen also prosecuted Henry Smith, who was found guilty of the 2011 murder of Vallejo police Officer James Capoot. Jensen’s lawsuit states that her house was burglarized and trashed while she was in court during the 2015 trial. After she secured a guilty verdict, Jensen asked for a temporary reassignment from the homicide unit.

Jensen went on disability leave from the DA’s office after she was diagnosed with post-traumatic stress disorder in September 2017, according to her lawsuit. Her symptoms had begun during the Verducci and Smith trials and left her unable to work in courtroom settings involving violent offenders.

But the DA’s office and other Solano County representatives insisted that either Jensen resume her full duties as a prosecutor or she would not be allowed to return to work, despite the office being short staffed following an “unprecedented” wave of departures after Abrams’ election, according to the lawsuit. County data indicates that 65 employees left the DA’s office between Abrams’ election in June 2014 and September 2017.

Eventually, Jensen was forcibly removed from the DA’s office by armed investigators after she attempted to return to work in May 2018, the lawsuit states. Her key card was taken and she was only allowed to do paperwork from home with minimal contact with coworkers.

“It was hard to discern how we could accommodate her at that point with all the different duties that we have to do in this office,” Sequeira told the Sun. “It was very hard to figure out how we were going to accommodate her.”

The county counsel’s office “did give her money but ultimately it did not have to do with political retaliation,” Sequeira said.

Teresa Ray had worked for the Solano County DA’s office from 1998 until she was fired in 2017. In 2014, when Abrams was running for DA, Ray was one of two chief deputies in the office. Ray alleged in a claim submitted after her termination that “Abrams harbored an intense personal animosity” toward her. During the campaign, Ray supported then-DA Donald du Bain, but Abrams was ultimately elected.

Ray alleges that after Abrams became DA, she targeted Ray for retaliation. Ray said that she was “forced to take a voluntary demotion” from her chief deputy position, that Abrams attempted to demote her further without cause, and that she was reassigned to lesser duties.

According to her claim, Ray was “terminated without good cause and for illegal reasons, including, but not limited to, her right to engage in protected political activity as a public employee” as of Aug. 23, 2017.

Sequeira said that Ray was fired for her conduct in a murder case against Jovon Granado and Eric Rico, who were accused of attempting to kill a rival gang member, leading to a 2014 shootout in Fairfield that killed 16-year-old Naomy Rojas.

Ray had failed to turn over a key witness statement to defense attorneys, an omission that Jensen caught and corrected. In April 2016, when Granado and Rico’s defense attorneys filed a motion to dismiss the charges based on Ray’s conduct, Solano County Superior Court Judge Robert Bowers denied the motion but said that Ray’s conduct was “disturbing,” according to a transcript of the proceeding.

“Due to the DA’s gross negligence at best, willful misconduct, most likely, this has cost the courts and the parties a lot of time and money,” Bowers said.

The DA’s office then negotiated a deal for Granado and Rico to plead no contest to voluntary manslaughter. Sequeira spoke at that hearing in August, calling the omission “regrettable,” and saying, “Thank God for the diligence of Ms. Jensen that this was discovered before trial,” according to a hearing transcript.

Sequeira told the Sun that Abrams had recused herself from making a discipline decision regarding Ray’s conduct in the case, leaving it to himself and Henry. While Ray had not made any formal accusation of political retaliation at that time, Sequeira said that Abrams recused herself “because she thought that someone would say ‘you're doing this as retaliation.’”

He and Henry then decided to fire Ray. Abrams “looked very surprised that's the decision we came to,” Sequeira said.

In her claim, Ray accused Henry of singling her out for false criticism on Abrams’ orders and accused Sequeira of “gratuitously and falsely” criticizing her conduct in open court, apparently referring to the hearing regarding Granado and Rico.

The following year, the county settled the claim prior to Ray filing a lawsuit for $500,000.

“The county made their decision to give her money,” Sequeira said. “And not with our blessing.”