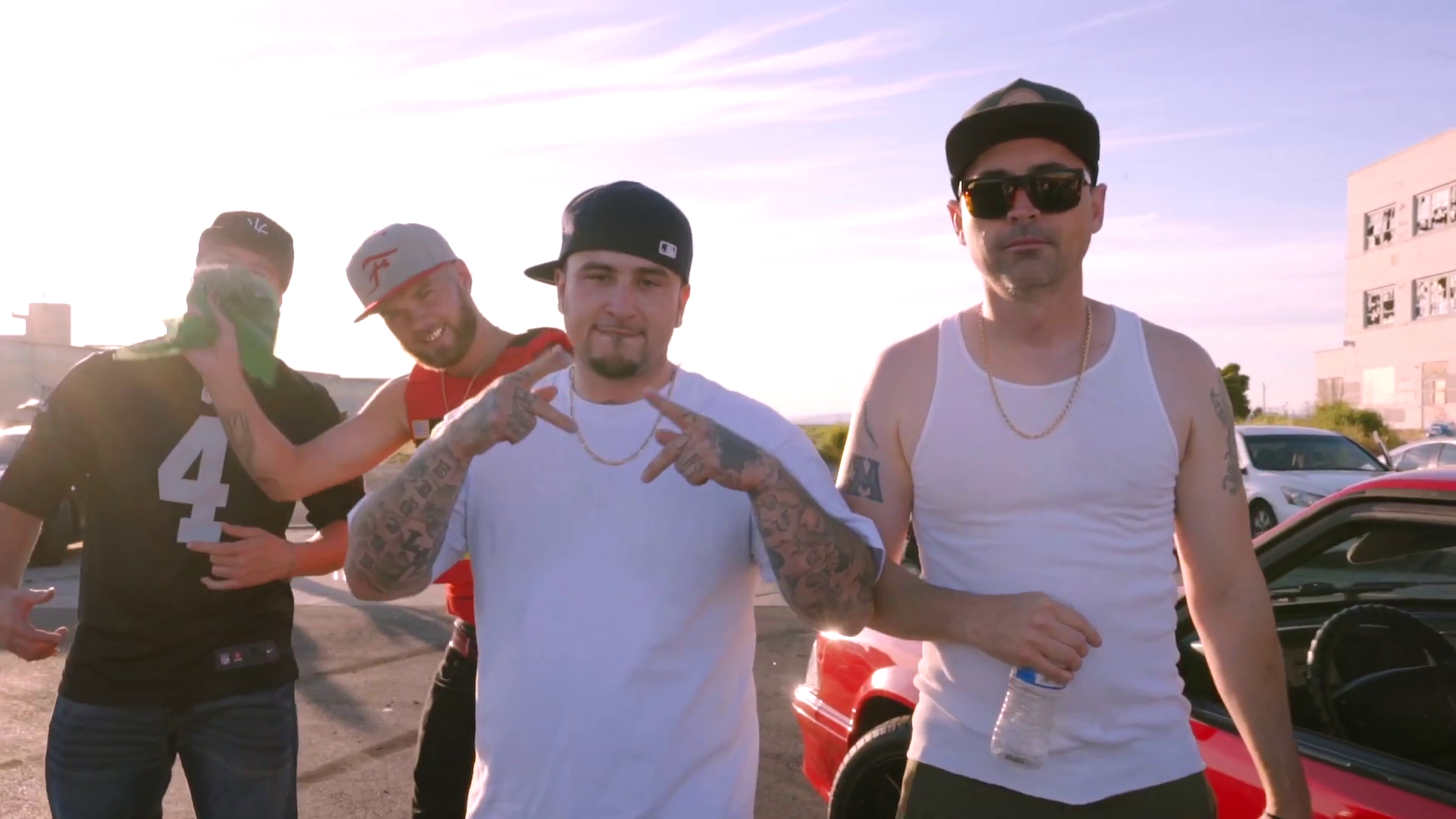 Jacob Harding-Abeyta, center, appears in a music video with rapper Matt Donohue aka Blasé 417, right. Federal prosecutors used the video as evidence that Harding-Abeyta was associated with the Family Affiliated Irish Mafia, an offshoot of the Aryan Brotherhood.

VALLEJO – Federal prosecutors used a Vallejo man’s appearance in a 2019 rap video as evidence that he was associated with the Family Affiliated Irish Mafia gang. They also successfully argued that Jacob Harding-Abeyta should be denied bail as he faces charges of possessing a gun linked to two shootings.

Harding-Abeyta, 28, has been charged in federal court with unlawful possession of a firearm. In charging documents, Solano County Sheriff’s Detective Dalton Ryken wrote that Harding-Abeyta was a suspect in two shootings last year in unincorporated Vallejo. Deputies stopped and searched him and allegedly found a gun that ballistics tests linked to the two shootings.

He was arrested last year and indicted in federal court in June. He was denied release at an earlier hearing but in August, his defense attorneys argued that he should be released, saying he was a devoted father, not a flight risk, and that there was no evidence he was a gang member.

But prosecutors opposed the motion, arguing that Harding-Abeyta was in fact connected to the Family Affiliated Irish Mafia, a Bay Area-based offshoot of the Aryan Brotherhood prison gang. As evidence, they pointed to a rap video by Matt Donohue, also known as Blasé 417. The video, prosecutors said, contained several symbols used by Irish Mafia members such as green handkerchiefs with clover print as well as Donohue’s prominent FAIM tattoos.

Harding-Abeyta is a lifelong Vallejo resident, his attorneys wrote in a motion for his release. When he was very young, his father abandoned his family and his mother struggled to care for him and his siblings. His mother remarried when he was 6 years old, but his stepfather was indicted and sentenced to 10 years in prison.

In 2014, Harding-Abeyta was convicted of attempted murder, according to court records. During an argument at the Blue Rock Lounge in Vallejo, Harding-Abeyta threw a bar stool and pulled out a knife, according to a Vallejo police report. He was kicked out of the bar, but later returned and stabbed the person who kicked him out multiple times. He was released on parole in 2018.

On Sept. 29 and 30 of last year, Solano County Sheriff’s deputies responded to two shootings near the same residence in unincorporated Vallejo. Surveillance footage allegedly shows Harding-Abeyta’s car leaving the area. Deputies stopped him on Oct. 7 at a Vallejo home where he said he’d been staying, according to court records. He was still on parole, and deputies searched him and the residence.

In a room where he, his girlfriend, and their one-year-old child had been staying, deputies found a .45-caliber pistol under a mattress. In a bathroom only accessible through the bedroom, deputies found 40 grams of cocaine, according to court records.

Harding-Abeyta was arrested for the gun and drugs as well as child endangerment.  He was charged in state court and released on bail. Prosecutors said that the ballistics tests presumptively linked the gun recovered to the two shootings.

In May, while out on bail, Harding-Abeyta was the victim of a shooting, but prosecutors said that he may have been armed with an AR-15 rifle at the time.

He was at Gentleman Jim’s bar in Vallejo for a birthday party when he got into another argument. Harding-Abeyta threatened to come to the other man’s house to beat him up, so when the man got home, he got a shotgun.

Harding-Abeyta was uncooperative with investigators and said he was intoxicated and didn’t remember who he was fighting with or where he was, according to prosecutors. “I can tell you nothing,” he allegedly told police.

Harding-Abeyta also has two daughters — ages 2 and 3 — whom he co-parented with their mother. But their mother suffered an “unknown medical event” in June that has left her “completely incapacitated and effectively braindead,” his attorneys wrote in their motion for release.

In a series of character reference letters attached to the defense attorney’s motion, family and friends asked for leniency and for Harding-Abeyta to be granted pretrial release.

“Jacob is very responsible and he knows the importance of making all his court appearances,” his mother wrote. “He also would never flee leaving his girls behind because he loves them.”