About 30 people showed up to the Bridgeway Church along Georgia Street Saturday for the first forum hosted by the 411 Series Vallejo Seeking Solutions group.
Share this news on: 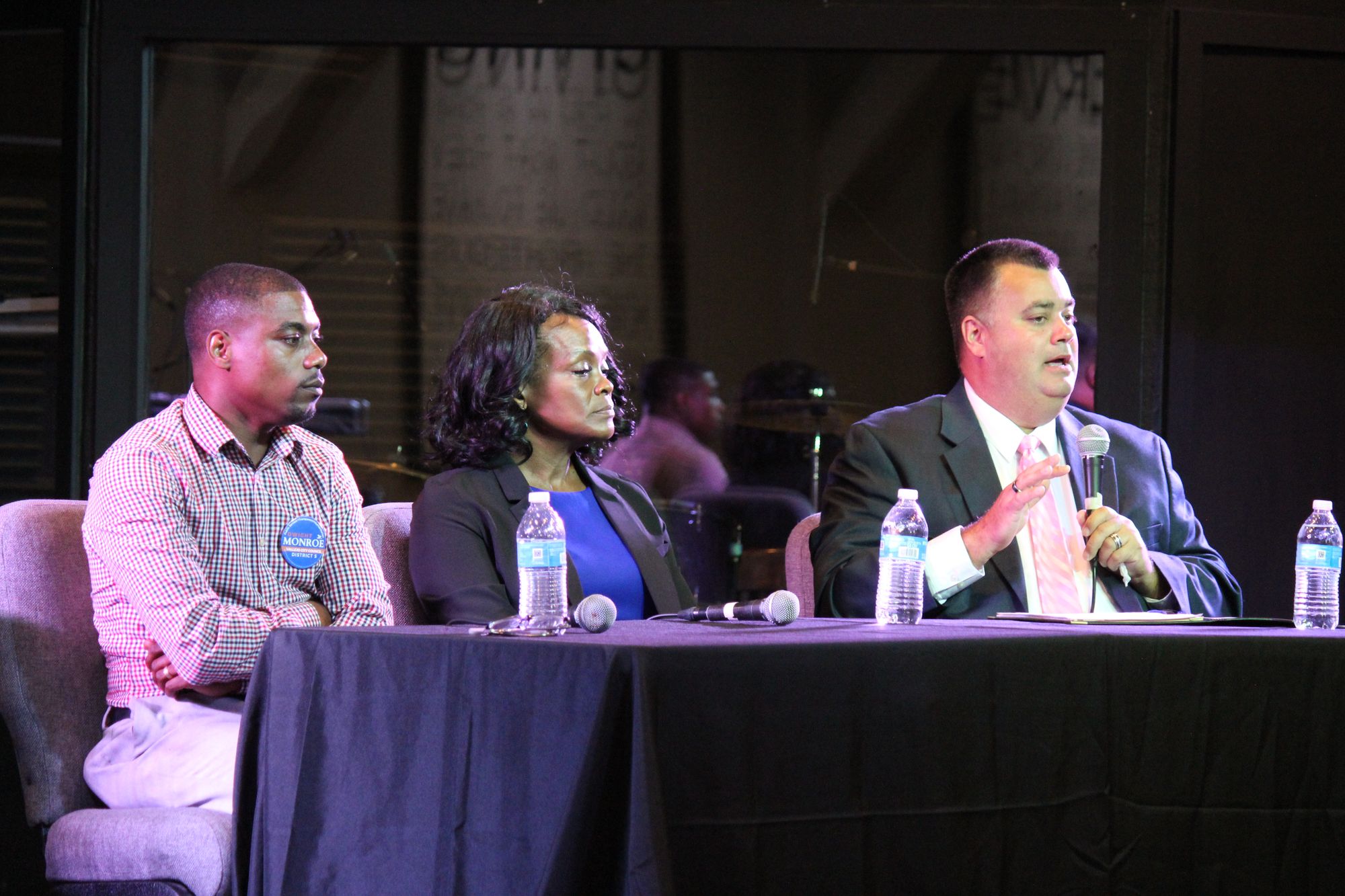 VALLEJO – For the second time this election season, those vying to represent District 5 on the Vallejo City Council debated on topics ranging from what police reform looks like to how they would ensure the impacted families are heard and whether they support a proposed tax measure.

About 30 people showed up to the Bridgeway Church along Georgia Street Saturday for the first forum hosted by the 411 Series Vallejo Seeking Solutions group. Only three of the five candidates participated, as local businesswoman Tara Beasley-Stansberry and Planning Commissioner Melissa Bowman were not present.

Businessman Dwight Monroe Jr. was the only to show support for Measure P, a proposed seven-eighths-cent sales tax increase that Vallejo residents will vote on this fall.

“We need to as a city, we need to get more revenue,” Monroe said. “And if we continue to say ‘no’ to everything, as a city, how does that show that we’re looking to grow?”

Fellow candidates Tanya Hall, a college career advisor who works for the Vallejo school district, and healthcare administrator Peter Bregenzer, said they were against the measure.

“I am in support of bringing in industry to make that difference in money and funding,” Hall said before referencing the history of Mare Island.“I see we have a space over there, and I see that we have the opportunities there for us to bring in funding to bring in money without imposing on those who are paying taxes and raising taxes for citizens.”

Bregenzer said he supports “the intention of the measure in order to fix our streets and our infrastructure,” but he expressed some concerns that the money doesn’t have to be spent on infrastructure.

The candidates were asked a number of police-related questions including how they would ensure that the voices of families that have lost a loved one to a violent encounter with Vallejo police would be heard.

“I feel that the city council, the city attorney has fallen flat on their face, to be honest with this topic,” Bregenzer said.

Bregenzer noted that when the families speak at council meetings the members aren’t allowed to speak on the topic because it’s not on the agenda. He also said that the city hasn’t convened a special meeting or memorial service to talk about the issues faced by the impacted families.

“That has not happened as far as I know.” Bregenzer said. “And that's where the city has fallen flat on its face. We have not taken responsibility for what's happened in our city, and we're not not able to move forward or we're not able to bridge those gaps. And then mend those feelings, when those feelings can't be heard and accepted.”

“You know, there's procedures that the city government has in place that stops people from talking, you know, these people, they take their time out [to attend the meetings],” he added.  “And you know, they preach and they demand justice and their hearts are full and the thing is, I've seen city council members just look at them [with] blank [faces].”

Hall said it was important to “allow the families to actually express and to vent,” and to listen to them.

The trio said they support some sort of police oversight with Hall suggesting a model akin to the “jury duty process” of 12 individuals.

“Some [would be] from the actual police force, you know, perhaps some of their more disciplined, or better rate, I don’t know I should say better, but depending on their rank, officers,” Hall explained. “I also think that it should be individuals from the community.”

Bregenzer said he supports the model presented by Common Ground, a non-partisan group of religious and non-profit organizations in Solano and Napa counties, which is advocating for a three-prong approach: a civilian police commission, inspector general, and community police review agency.

He said that he wished it wasn’t the “most expensive option.”

“But you know, sometimes you have to pay for what you really want,” he added. “I think we've struggled with this for a very long time as a city and I think we need to finally put our money where our mouth is and do the right thing and resolve this issue that's been plaguing our city for a long time.”

All three candidates said they would not accept an endorsement from the Vallejo Police Officers’ Association.

“I'm not accepting any endorsements from any special interest groups,” Bregenzer said.  “I'm here to represent the residents of district five.”

The candidates were also asked to explain what issues they would push to agendize once elected to the council.

Monroe said his top goal centered on getting the homeless navigation center up and running.

“I want to make sure that that navigation center comes to real life, because we actually proposed [that the] city council actually put $2 million towards it with that first set of $13 million in [American Rescue Plan Act] funds,” Monroe said.

Vallejo’s proposed 125-bed homelessness navigation center has been beset with delays and an increasing budget over the past few years. City officials revealed last December that the proposed location for the navigation center at 5 Midway St. didn’t allow human habitation because of prior industrial uses of the property. The city has no target date for when the center would open, and city officials said in November they are short of the $2.3 million necessary to complete the project.

Bregenzer also mentioned the navigation center as something he would push for, stressing it was important to find funding for the project.

Hall said she would also agendize issues surrounding the unhoused and then crime and safety items.

Monroe said the city needs to address more services for the city’s children. He criticized the council for not talking more about youth issues.

“Quite frankly, that means that we're not talking about our future, so we need to start agendize and some more things that focus on redeveloping [the city’s approach to the youth],” Monroe said.

All three said they would work with their fellow council members to get things done.

“You just have to build that morale, and you have to keep people moving forward and seeing what the true goal of the process is and how to get there,” Bregenzer said. “For us, of course, the goal is moving Vallejo forward and making sure that we're getting what we need for our citizens and our residents for the city.”

Hall said she “would become that middle person bringing both sides together.”

“But obviously, the ones who are up there serving on city council now, they had something that the citizens did admire or appreciate about them,” said Hall. “And so I could be that one to bring both sides together and come up with a solution.”

Hall said, if elected, she would bring wisdom and authenticity to the council.

Monroe said he’s been meeting with the city manager, different members of city staff, and different council members because he wants “to know who they are.”

“I want to look them in the eye,” Monroe said. “You don't get the best view when you're sitting in the audience compared to the dais, unless you walk up to them.”

The city switched from citywide council elections to district-based elections in 2019, and this is the first time District 5 will be represented on the council. Councilmember Hakeem Brown, who is an at-large member, lives in the district. Brown is not seeking re-election to the council after serving just one term.