The video released includes dash camera video and body camera video from three deputies who were present during the shooting on June 19.
Share this news on: 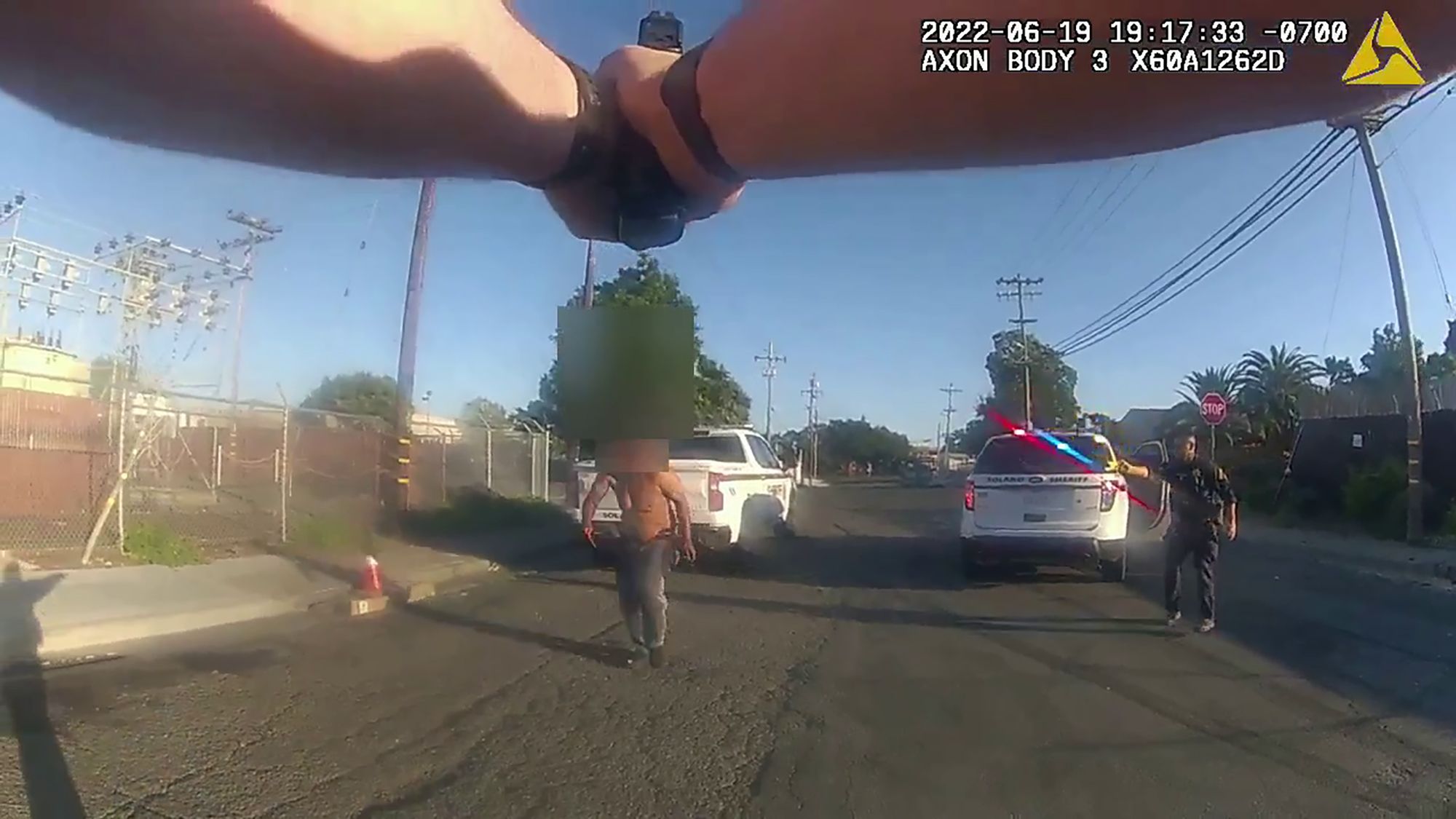 The release comes in response to a public records request from the Vallejo Sun. The sheriff’s office delayed release of the video for 30 days past a 45-day deadline under state law because the Solano County District Attorney’s Office said it had yet to interview all witnesses.


The video released includes dash camera video and body camera video from three deputies who were present during the shooting on June 19. The video shows the deputies arrive in a patrol car and a marked pickup truck and quickly confront Thompson, who was walking shirtless at the intersection of Pennsylvania and Sutter streets.

As he approached the deputies, dash cam video shows Thompson throw an item at them, which the sheriff’s office identified as a reciprocating saw blade.

As the deputies arrived, Thompson walked toward them between the two sheriff’s vehicles. Deputy John Robertson immediately drew his gun as he exited his patrol car and yelled “stop!” repeatedly at Thompson, who continued walking toward Robertson.

With his gun pointed at Thompson who kept approaching, Robertson said things like “Stop, bud. Just talk to me” and “Stop. I don’t want to shoot you, man” as Thompson quickened his pace towards the deputy. Deputy Eduardo Borrego Tased Thompson, but he continued moving toward Robertson, who then fired seven shots at Thompson from just feet away.

Seconds later, Thompson rose to his knees while bleeding profusely and then collapsed again while moaning.

“Don’t shoot, I got him,” Robertson said with his gun again pointed at Thompson. “Stay down, man. Please, I’m begging you.”

Deputies kept yelling at Thompson to “drop the knife,” but Thompson remained unresponsive to commands and began shaking and moaning and yelling.

After about three minutes, the deputies approached Thompson, handcuffed him and began providing medical attention as other deputies arrived.

A statement from the sheriff’s office released along with the video said that the deputies mistook the saw blades that Thompson was holding for knives.

Vallejo police called the sheriff’s office at 7 p.m. to ask them to respond to the call as the department still had no available officers. A deputy requested a mobile crisis unit, a special mental health crisis response team, but none was available, according to the sheriff’s office.

Two eyewitnesses previously told the Vallejo Sun that they thought the shooting was excessive or “overkill.”

Those witnesses — who spoke to the Sun on the condition of anonymity — said sheriff’s deputies did not try to de-escalate the situation despite Thompson appearing to harm himself with the saw blades before gesturing towards authorities.

That witness described the man as appearing “highly agitated, maybe having a mental health issue” as police approached him and ordered him to drop the object he had in his hand.

Another police fatality investigated under the revamped protocol was the death of Scott Hamers. He was struck by a speeding Benicia police officer in November 2020. In that case, the DA’s office declined to charge Officer James Franklin despite the California Highway Patrol determination that Franklin would have avoided the crash had he not been speeding.

Thompson’s sister, Nicole Thompson of Sacramento set up a GoFundMe for her brother’s family which had raised $2,525 of their $4,000 goal as of Saturday.

The GoFundMe says Thompson returned to his family, including his wife and daughter, in February, when he was released after being incarcerated for eight years.

Court records show Thompson was sentenced to 11 years after pleading no contest to a homicide charge in September 2016 for the fatal shooting of 27-year-old Gustavo Banda in April 2014. Thompson’s defense attorney at the time, Tim Pori, said the shooting was in self-defense. A 15-year-old boy was also wounded in the shooting.