The mechanical issue on a conveyer system ignited petroleum coke, which is produced at the Valero Benicia refinery for export
Share this news on: 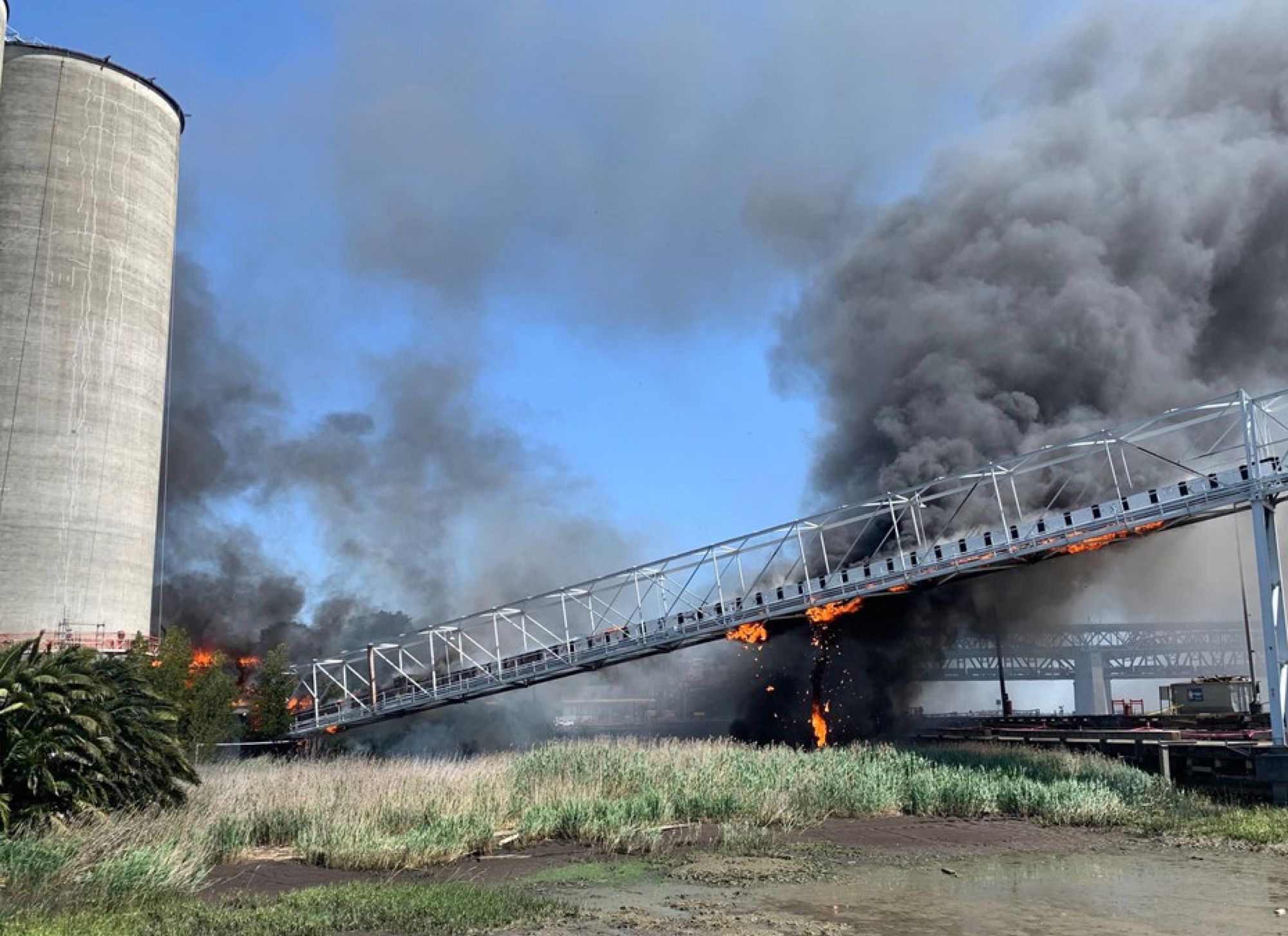 Fire burning on a petcoke conveyer at the Port of Benicia on April 9. Fire investigators believe that the fire likely originated with a mechanical issue on the conveyer. Photo: Benicia Fire Department.

BENICIA – A fire at the Port of Benicia in April was likely caused by heat from a mechanical issue on a conveyer system that ignited petroleum coke, which is produced at the Valero Benicia refinery for export, Benicia fire officials said.

The fire department provided an update on the fire to the Benicia City Council on Tuesday which included the information about the likely cause of the fire. Fire officials had previously pointed to conveyers at the petcoke silos as the fire’s origin point in a news release last month but hadn't determined the specific cause.

Just after the fire was reported at 12:20 p.m. on April 9, arriving fire crews saw fire near the petcoke silos burning in a utility building at the base of the silo and up a conveyer toward a docked tanker ship, Benicia fire Chief Josh Chadwick said Tuesday.

The building and conveyer are part of the port’s petcoke export facility. It also includes the large silo to store the flammable solid petroleum product, which is used as fuel. Benicia Mayor Steve Young said when the fire was still burning that officials feared the silo may have caught fire, but that was not the case.

Petcoke is produced at the Valero Benicia Refinery and transported by rail to the port, where it is stored until loaded onto ships for export. Valero and port operator Amports were sued in March by the environmental group San Francisco Baykeeper for allegedly allowing the petcoke to be released into the air and the Carquinez Strait. That lawsuit is ongoing.

The port property is owned by the city of Benicia and leased to Amports.

At Tuesday’s meeting, Young advocated for changes to the conveyer system, not only to prevent future fires but also to prevent discharge into the strait.

The firefighters’ priority was to prevent the fire from reaching the petcoke silos, but it spread under the paved pier to support beams soaked in creosote, a flammable wood preservative used because the supports were mostly submerged in the Carquinez Strait.

Weather conditions provided firefighters with some luck as they worked to get the pier fire under control. While the conditions were windy, helping the fire to spread, the wind blew the potentially toxic smoke away from the city.

In a text message shared with the city council, Chadwick wrote to incident commander Todd Matthews, “Your biggest job now, or anyone who’s monitoring out there’s biggest job, is to immediately notice if the wind changes.”

If it did, city residents might have been told to shelter in place or evacuate, but that never happened.

“The only way to really access the fire is with fire boats,” Chadwick said. “The other way is basically breaking through those layers of blacktop roadway to get to the fire from the top.”

The port had previously burned on Sept. 4, 2001, when an illegal campfire started by people fishing on the shoreline sparked a similar blaze under a pier. That fire burned an 80-yard section of the pier and took two and a half days to extinguish, Chadwick said, but gave them ideas on how to best fight this fire.

This time, the fire burned for a day. It was declared under control at 12:24 p.m. on April 10, almost exactly 24 hours after the first call.

The petcoke silo and conveyer is located on the westernmost portion of the pier. According to an April 12 inspection report completed by the engineering firm COWI North America obtained through a public records request, Amports could continue using the eastern section of the pier without restriction.

Chadwick said that Amports vehicle import business was operating again in a few days and the only remaining impacted area of the port is in loading petcoke onto ships for export.