Fire is burning through timber supports under roads going to the wharf.
Share this news on: 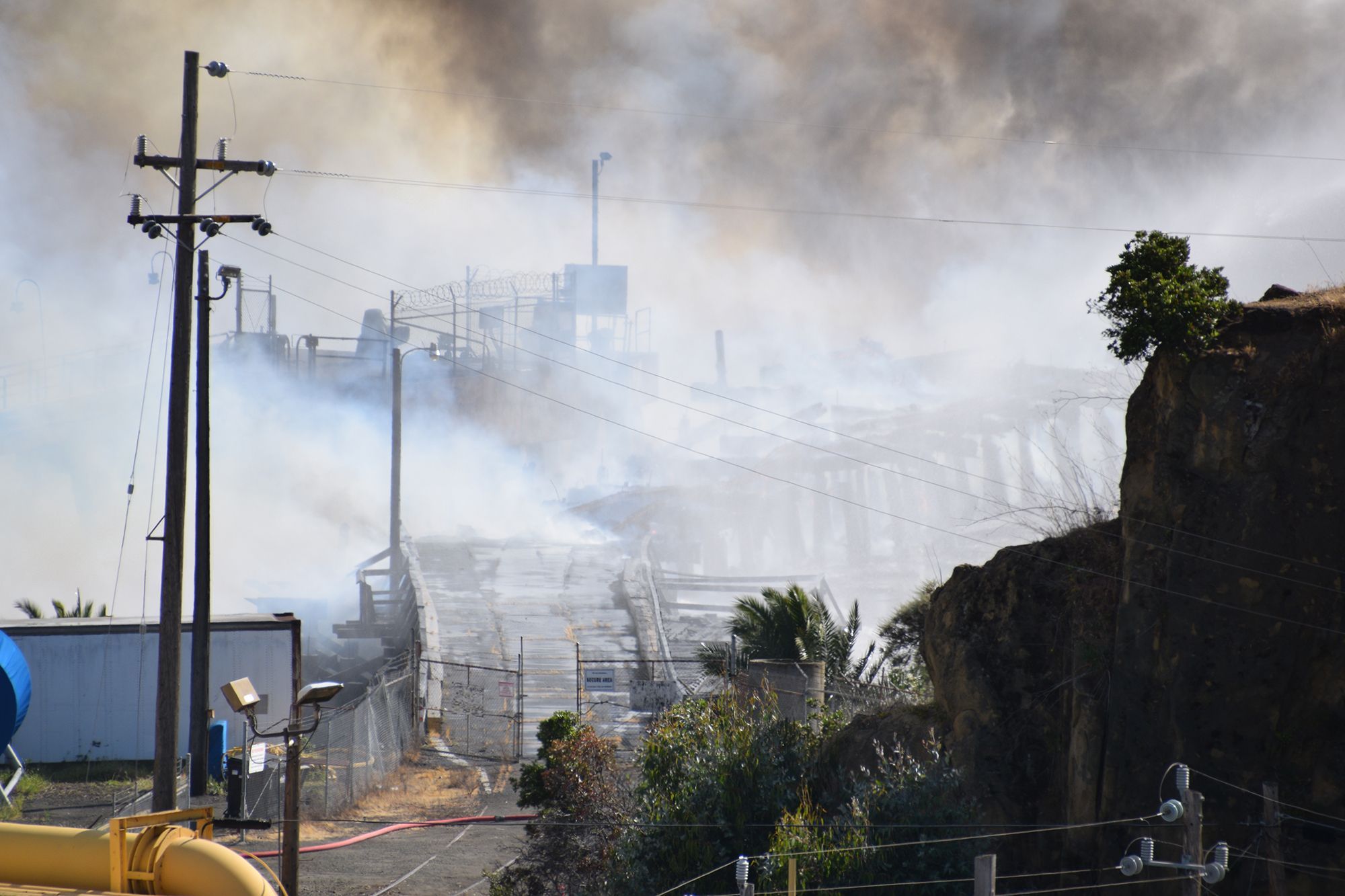 Firefighters douse a burned wharf at the Port of Benicia on Saturday afternoon. Photo: Scott Morris.

BENICIA – A four-alarm fire broke out under a wharf at the Port of Benicia Saturday afternoon, sending plumes of potentially toxic smoke into the air, according to the Benicia Fire Department.

Firefighters from across the region responded to the Benicia port throughout the day to try and put the fire out, but Benicia Mayor Steve Young said that firefighters don’t expect to have it out anytime soon.

“It may be a day or even more before it’s actually put out,” Young said at around 5 p.m. on Saturday. “Right now, it’s a containment situation.”

Fire officials said that the fire started at 12:20 p.m. and quickly grew to three alarms. Young said that fire is burning through timber supports under roads going to the wharf. The timber is partially submerged in water and for that reason is soaked in creosote, a chemical compound derived from tar and used as a wood preservative.

The presence of creosote makes the fire especially difficult to put out and makes the air more hazardous. For the moment, Young said, the wind is blowing away from the city so there are no significant air quality hazards from the fire and he said the city had no reason to expect that would change.

If the wind did change, the city may enact shelter-in-place or evacuation orders, including potentially for an artist community in the Lower Arsenal area or other areas in the southeast portion of the city.

The fire is mostly burning on a wharf used by port operator Amports Inc. for importing cars, Young said, but it is difficult to tell at this point how far it has spread.

It may also be burning on an adjacent wharf used for the export of petroleum coke, or petcoke, a solid petroleum product used as fuel and produced at the Valero Benicia Refinery.

Amports and Valero were sued last month by the environmental group San Francisco Baykeeper for allegedly allowing the petcoke to be released into the air and the Carquinez Strait. That lawsuit is ongoing.

The fire poses a further environmental hazard to the strait as the burned creosote flows into the water.

It’s not clear how the fire started, but Young said it may have been a grass fire that spread to the supporting timber.