Who are the Three Percenters?

“The ethos of groups like the so-called ‘3%-ers’ is armed rebellion against the federal government," prosecutors said.
Share this news on: 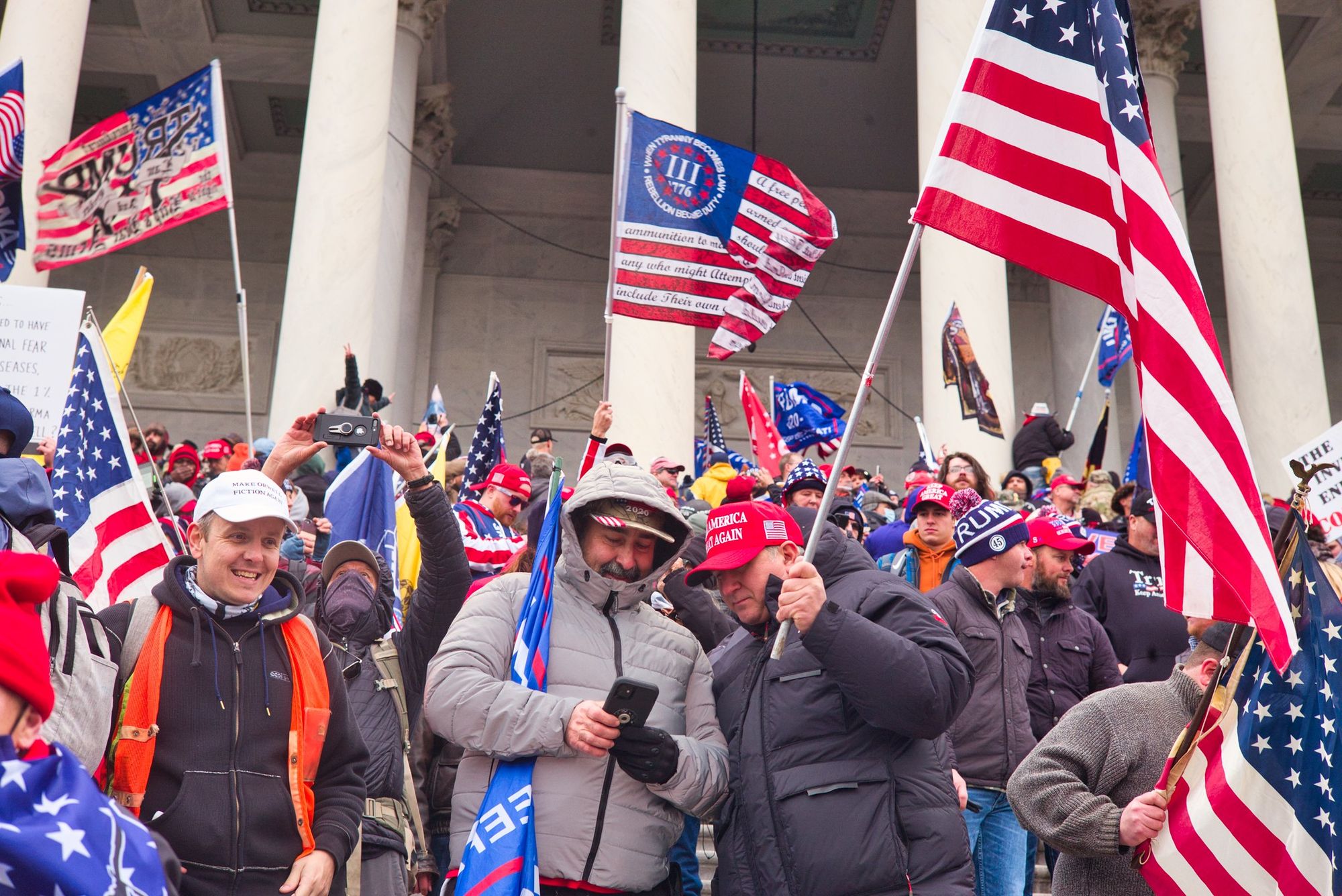 A Three Percenter flag flying above a crowd at the U.S. Capitol on Jan. 6, 2021. Photo: Brett Davis/Flickr shared via Creative Commons.

After Napa mechanic Ian Rogers was arrested with nearly 50 guns and several pipe bombs in early 2021, investigators with the FBI wrote in an affidavit that he had an emblem on his car indicating he was a member of the Three Percenters, identified as a group of pro-gun, anti-government extremists.

The symbol of the Three Percenters – a Roman numeral III surrounded by thirteen stars – was also prominent in the Jan. 6, 2021, attack on the U.S. Capitol.

Weeks later, an investigative report revealed that at least three Solano County Sheriff’s deputies had displayed the same symbol on their social media pages. Solano County Sheriff Tom Ferrara has denied that any of his deputies associate with extremist groups and said that the deputies merely intended to show support for the 2nd Amendment.

In a letter to the activist group Benicia Black Lives Matter, Ferrara wrote that he did not know what a Three Percenter was before the attack on the Capitol and argued that since the posts were made – some dated back to 2016 and some were from just a few weeks before the Capitol attack – “the ideology of the III percenters has changed.”

Rogers and a co-conspirator were later charged with plotting to attack the Democrats’ headquarters in Sacramento and federal prosecutors said that the two were part of a larger group of active Three Percenters in the Bay Area.

The FBI and Solano County Sheriff’s Office have presented vastly different pictures of the Three Percenters. So who are they really?

The group’s ideology has changed little since its inception in 2008 in reaction to the election of President Barack Obama. Three Percenters subscribe to the false belief that only 3% of American colonists fought in the Revolutionary War and that they are preparing for a second Civil War, should, among other things, the federal government attempt to seize firearms.

The group’s origins have been traced to the Sipsey Streets Irregulars blog, which referenced “the Three Percent” in the second post in 2008 by author Mike Vanderboegh, a longtime militia member from Alabama, who was triggered by Obama’s election to believe his gun rights were in jeopardy.

“There are American gun owners, the Three Percent, who will resist these laws,” Vanderboegh wrote, adding they anticipated committing violence against the government.

“The administration will kick in the doors of American gun owners to achieve this allegedly ‘reasonable’ objective,” he wrote.” Shots will be fired, and the next American civil war will be off and running.”

The resurgent militia movement drew national attention in 2014 when a dispute between a Nevada cattle rancher and the Bureau of Land Management escalated into an armed confrontation with federal authorities.

Cliven Bundy had resisted paying grazing fees for his use of federally owned land for more than two decades. When the BLM attempted to round up the cattle, armed militia members arrived in droves to support Bundy, many of them affiliated with the Three Percenter movement, including Vanderboegh himself. Eventually, federal authorities released the cattle to de-escalate the situation.

Two years later, Cliven Bundy’s sons Ammon and Ryan Bundy were involved in another standoff with federal authorities supported by Three Percenter groups at the Malheur National Wildlife Refuge in Oregon. After the Bundys took over the refuge headquarters, the “3% of Idaho” arrived to establish a perimeter.

On Jan. 26, 2016, when occupation leaders, including the Bundys, were driving away from the refuge in a convoy, law enforcement officers stopped them. After a brief pursuit, federal agents shot and killed driver LaVoy Finicum. The Bundys were arrested, but the occupation continued for weeks, until the remaining militants were taken into custody.

In August 2017, white nationalists held a “Unite the Right” rally in Charlottesville, Virginia, where heavily armed militia members, including affiliates of the Three Percenters, stood between the far-right groups and counter-protesters. Eventually, James Fields Jr. drove his car into a counter-protest and killed 32-year-old Heather Heyer and wounded 35 others. After intense backlash to the white nationalist rally, a national Three Percenter organization disavowed Nazis and white supremacists.

Still, Three Percenters have been implicated in violent plots targeting minorities. On Aug. 5, 2017 – about a week before the Unite the Right rally – former sheriff’s deputy Michael Hari, the leader of a white supremacist militia group called the “White Rabbit Three Percent Illinois Patriot Freedom Fighters Militia” – planned and executed the bombing of a Mosque in Minnesota along with two other men. Hari was convicted of federal bombing and hate crime charges in 2020.

Since then, Three Percenters have been implicated in several other violent plots.

On Aug. 12, 2017, the FBI arrested Jerry Varnell after he attempted to detonate what he believed to be a bomb in a van he had parked in an alley next to an Oklahoma bank, though he in fact had hatched the scheme with undercover FBI agents, who ensured the explosives were inert.  Varnell, who told the FBI agents he had “III% ideology,” was sentenced to 25 years in prison.

In 2020, members of an extremist militia group were arrested and charged with the attempted kidnapping of Michigan Gov. Gretchen Whitmer. Michigan State Police said that Adam Fox, accused of being one of the leaders of the plot, was the leader of a group called the “Michigan III%ers.” During a trial this year, Fox’s defense attorney argued that he had been manipulated into the plan by a former militia member turned FBI informant. Two co-defendants were acquitted and a jury deadlocked on charges against Fox.

Also in 2020, the FBI arrested Christian Stanley Ferguson of Ohio after he allegedly tried to organize a new militia called the “75th Spartans” that was affiliated with the Three Percenter movement and discussed in online chat rooms kidnapping or killing police officers to take their equipment. Ferguson was convicted last year.

The loose-knit group has no central organization but there are some affiliated national organizations. The Three Percent United Patriots or 3UP, which originated in Colorado, claims to be the largest and boasts membership across the United States. Among other things, 3UP has engaged in rogue border patrols in Arizona.

3UP was also active in California and the Bay Area. A private Facebook organizing group for the Bay Area faction that was shut down after the Capitol attack had 24 members, according to screenshots obtained by the Vallejo Sun. Federal prosecutors said that Ian Rogers and Jarrod Copeland, who were arrested for allegedly plotting an attack on the Democrats’ Sacramento headquarters, were both affiliated with 3UP.

An FBI tip that implicated Rogers indicated that 3UP membership was required to shoot at Twin Sisters Gun Club, a 160-acre wooded plot just outside of Fairfield, after Solano County found the club was operating illegally in 2016.

And while Rogers and Copeland told investigators that the group was merely a social club of “preppers” and not a militia, prosecutors said it was more than that.

In a motion to detain Copeland following his arrest, prosecutors wrote, “The ethos of groups like the so-called ‘3%-ers’ is armed rebellion against the federal government, which they liken to a tyrannical occupying power.”