Three of the four men vying to represent District 4 on the Vallejo City Council cited a desire to “serve” the city they call home.
Share this news on: 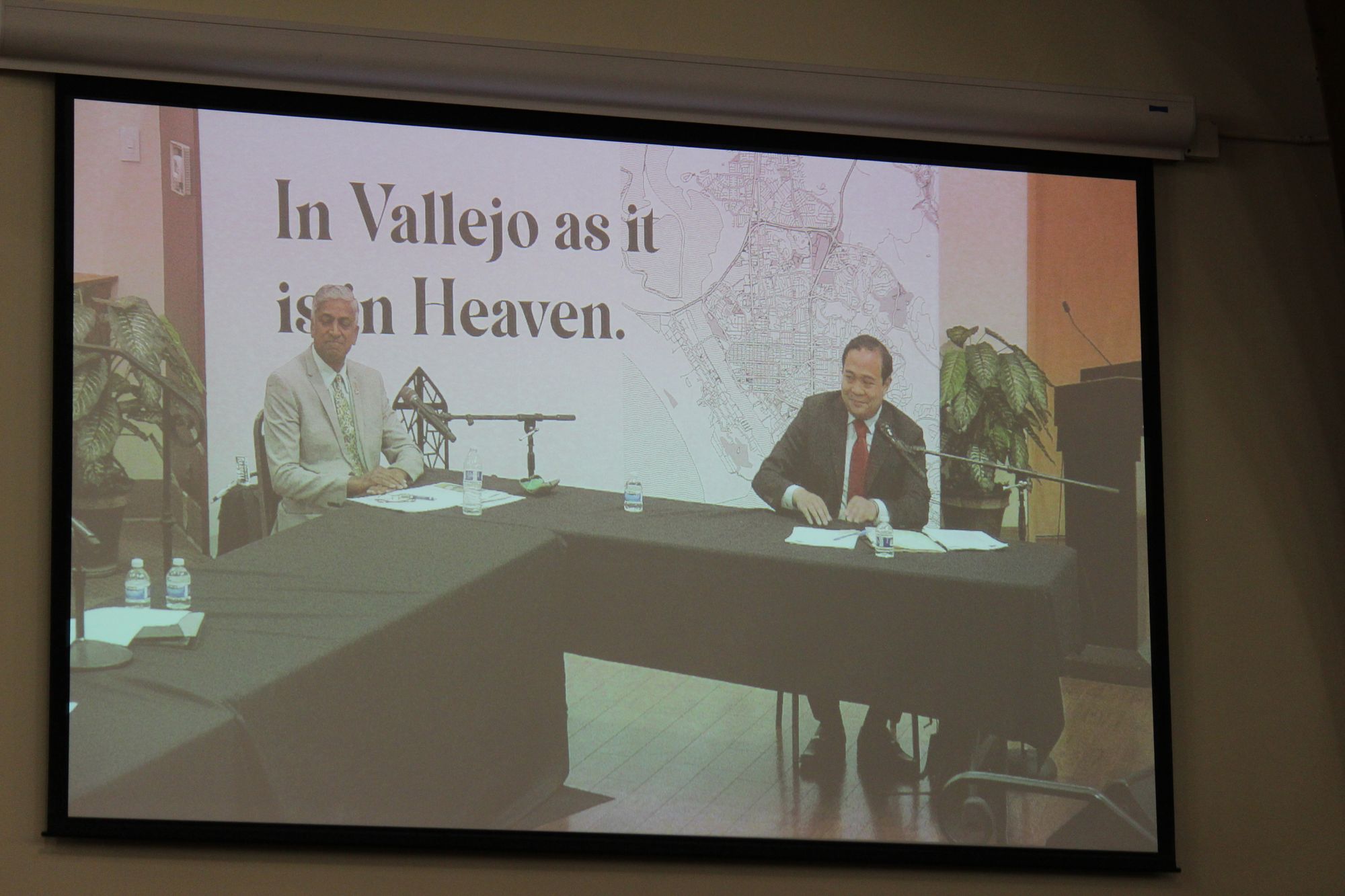 VALLEJO – Three of the four men vying to represent District 4 on the Vallejo City Council cited a desire to “serve” the city they call home during a candidates' forum held at the Friendship Missionary Baptist Church on Tuesday.

They debated during the hour-long forum about numerous issues, from how to get more youths involved in local politics to whether a proposed sales tax measure will help the city get back on its feet.

The candidates explained why they should represent the district, which encompasses downtown and Mare Island, on the seven-person council.

“Having attended city council meetings for many years, I’ve seen the residents’ issues, our issues being ignored,” said former Vallejo school board Trustee Ruscal Cayangyang. “If we continue to do business as usual, we risk going back into bankruptcy with worsening streets.”

“With my years of experience in government, listening and working with residents, and speaking up for those without a voice, I will, immediately, introduce much needed changes,” Cayangyang said.

Chris Platzer, a former planning commissioner, said that his experience growing up make him uniquely qualified to serve on the council.

“It is from the rich diversity that is Vallejo that we can draw from and make Vallejo better than it already is,” Platzer said.

A third candidate, Ravi Shankar, a 19-year resident with broad volunteer and community experience, said he was the right fit.

“If you would choose me this November, I will serve and be a role model and a public servant that you will be proud of to move Vallejo forward,” Shankar said.

A fourth candidate, planning commissioner Charles Palmares, was absent from the forum.

The trio was dealt a curveball by moderator Calvin Harrell of the Community Democratic Club when he asked about getting youth involved in the political process.

Both Cayangyang and Shankar chided the loss of the city’s youth commission, which has been defunct for years.

“To me, that is certainly not acceptable,” Shankar said. “That priority should have not been taken because children and youth continue to be our future.”

Cayangyang, who served on the commission, said he wants to bring it back and conduct outreach at city schools to find young people who want to be part of the commission. Cayangyang said he would have liked to see Vallejo use some of its American Rescue Plan Act funds to re-open the Omega Boys and Girls Club or help pay for students to play Little League. He also said it was important for the Mare Island Sports Complex, which closed in 2020, to be reopened.

Harrell asked if the candidates supported creating a student advisory position on the city council. Platzer said he was in support of “lowering the voting age within the districts to 14.”

“Give them a seat at the table, listen to what they have to say, let them participate in the conversations,” Platzer added.

Cayangyang said that while on the school board he pushed for a student trustee and said he would be happy to push for a similar advisory position on the city council.

“As an immigrant American, one of the first things I noticed was the lack of mandatory community service before they go to high school graduation, college, and beyond,” he said.

The candidates also explained their respective positions on Measure P, a proposed seven-eighths-cent sales tax increase that will be decided by Vallejo voters this fall. They previously debated that issue at an earlier forum in August. City officials say the tax hike would generate $18 million annually for the city’s general fund and would be used to address blight, illegal dumping, homelessness, roads, provide fire and police protection, and keep public spaces clean.

“Very clearly, no new taxes, no more new taxes,” Shankar said. “[During] the last couple years of the pandemic most everybody has suffered economic hardship of one kind or another.”

Cayangyang said that he was “strongly opposed” to Measure P.

“It’s going to be hard to shop in Vallejo, you’re just going to drive residents out of Vallejo to cities that have lower sales tax,” Cayangyang said. “We cannot afford that, especially when we’re trying to support and retain diverse businesses, minority-owned businesses in Vallejo.”

Platzer called sales taxes “regressive” as they “burden the least wealthy in a society.”

“I'm not in favor of those just from that standpoint,” he added.

Platzer said the city should “grow the general fund revenue overall, which you can do by having more people spending more money in Vallejo.” He pointed to job creation and allowing existing businesses in the city to expand.

The candidates lightly touched on police reform, with Cayangyang decrying the increase to the police department’s budget.

“We need to reallocate the funds from the police department to address quality of life issues,” Cayangyang said, stressing that funds could be used to address the numerous abandoned vehicles in the community.

“We need to ensure that our money is spent properly,” Cayangyang said. “As someone who has contacts at the regional and state level of government, I know where to find the money, there is plenty of money out there to fix our streets, which is long overdue.”

The election is the first for the district since Vallejo moved to district-based elections from citywide seats in 2019. At-large council member Katy Miessner lives in the district but is termed out of office this January.