Vallejo sees strong use of warming shelter during continued storms

Vallejo’s shelter was opened Monday and Tuesday nights inside the Vallejo Room on the first floor of the library and served 25 people on Monday night and 26 people on Tuesday
Share this news on: 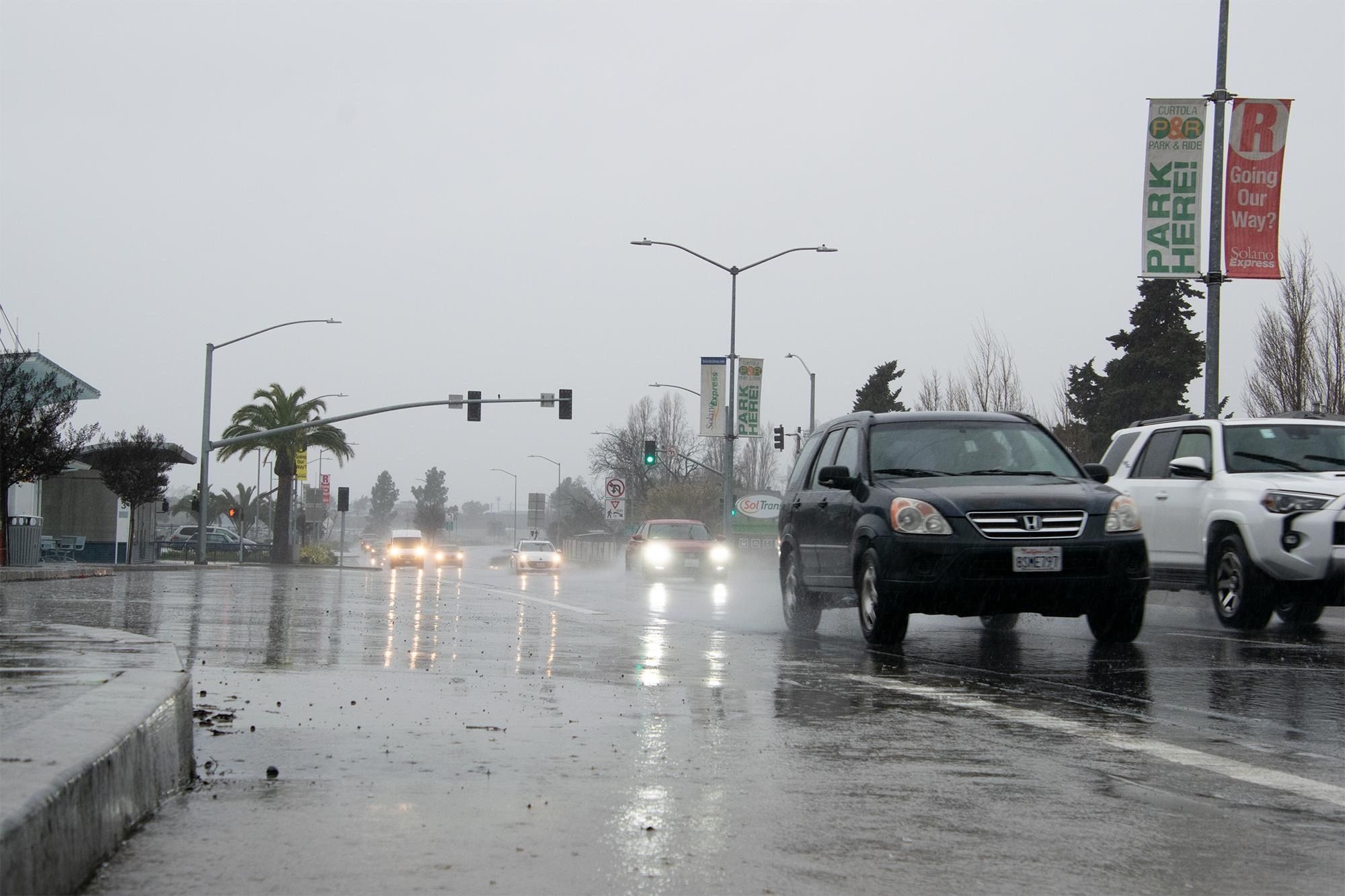 A series of storms continue to sweep through the region, including the city of Vallejo. Photo: Scott Morris.

VALLEJO – Dozens of people have taken advantage of a warming shelter open at the John F. Kennedy Library in downtown Vallejo this week as atmospheric river storms have continued to sweep through the region, causing flooding, downed trees and mudslides.

Vallejo’s shelter was opened Monday and Tuesday nights inside the Vallejo Room on the first floor of the library and served 25 people on Monday night and 26 people on Tuesday, according to Vallejo Spokesperson Christina Lee.

But despite that another atmospheric river is expected to arrive in Northern California this weekend, Lee said on Wednesday that the city has “no immediate plans to open an emergency shelter at this time.”

The Solano County Office of Emergency Services declared a local emergency on Tuesday because of continued impacts of localized flooding, downed trees and mudslides from December and January’s storms. President Joe Biden also declared a federal emergency in several California counties this week, but not in Solano.

Also on Tuesday, the county issued an evacuation warning for residents within a half mile of Suisun Creek between Cordelia and Fairfield. The area is at risk of flooding because Lake Curry, an unused reservoir owned by the city of Vallejo, is at risk of overflow.

Over the past two months, Vallejo has periodically opened an overnight warming shelter amid freezing temperatures and torrential rain. But the city’s execution was met with initial criticism because of a lack of transportation, a stunted ability to get the word out about the shelter, and a lack of amenities like beds or any means for privacy. The city has since worked with the county’s SolTrans bus service to provide free rides to and from the shelter.

The shelter has rotated between the Norman C. King Community Center in South Vallejo and the library. It was open in the library this week despite a fire that forced the library’s closure until Friday.

“The primary purpose was to provide an opportunity for people, who were out in the elements, to have an opportunity to come in,” Malone said. “Some of the things we are getting criticized for not providing are great things for us to maybe have in the future.”

“If we can provide a place where someone can come in, out of the elements, and stay warm, that’s been our primary goal, and we consider that actually to be a successful opening,” he added.

Malone said the city is talking with local nonprofits that work with the unsheltered to help get the word out about the warming shelter.

“We know just a regular social media blast is not going to get to the people that we need to serve, we are trying to expand our reach by getting that message out by engaging other people in the community to assist,” said Malone.

For years, Vallejo has struggled to provide services for its homeless residents as a 125-bed navigation center has been delayed multiple times for multiple reasons, including after going over budget and after the city officials revealed the parcel it had selected in South Vallejo was unfit for human habitation.

Vallejo took steps to get the project back on track by agreeing to purchase a new parcel for the project on Broadway Street, while also seeking federal funds from Solano County to finance it.

Councilmember Mina Loera-Diaz said during the Dec. 20 City Council meeting that she was named to a Community Action Partnership Solano ad-hoc committee with Solano County Supervisor Mitch Mashburn and Vacaville Councilmember Roy Stockton to look at applying for county funds to buy cots and other supplies for shelters.

Loera-Diaz, along with Vice Mayor Rozzana Verder-Aliga, serve as Vallejo’s representatives with the CAP Solano Joint Powers Authority, an agency made up of representatives from all seven Solano County cities working together to coordinate efforts on reducing poverty and homelessness in Solano.

Loera-Diaz announced during Tuesday’s City Council meeting that she wants to agendize a future discussion about providing services for the city’s homeless.

Loera-Diaz said the city needs to locate a vacant lot to allow RVs to park, with homeless individuals having access to portable showers, bathrooms, and social workers.

“We are in an emergency situation because there are just so many people out there,” Loera-Diaz said.

But CAP Solano decided two months ago not to conduct its biannual point-in-time count of unsheltered individuals this year, which could affect the region’s ability to receive funding to assist with homelessness. Those living in shelters will be counted.

According to JPA Homeless Coordinator Reneé Parham, CAP Solano made the decision because of a limited number of volunteers and time constraints.

Parham said that the United States Department of Housing and Urban Development (HUD) allows an area to skip the unsheltered count this year if a combined sheltered and unsheltered PIT count was held in 2022.

A count was conducted in February 2022 revealing that there were a combined 1,151 unsheltered and sheltered residents in Solano County, a 28-person increase from the 2019 count. A scheduled 2021 count was moved to 2022 due to the COVID-19 pandemic.

The point-in-time count is a national initiative to determine how many people are homeless and what the demographics are of those experiencing homelessness.

Parham said that in 2023, CAP Solano will do a shelter count “of those who on the night of the count are living in a supervised publicly or privately operated shelter designated to provide temporary living arrangements,” with such locations including congregate shelters, transitional housing, and hotels and motels paid for by charitable organizations or by federal, state, or local government programs for low-income individuals.

Parham further said the agency will do a housing inventory count, “based on beds and units available for occupancy on the night designated for the count that are dedicated to serving the homeless.”