There was minimal damage to the library, books, and equipment.
Share this news on: 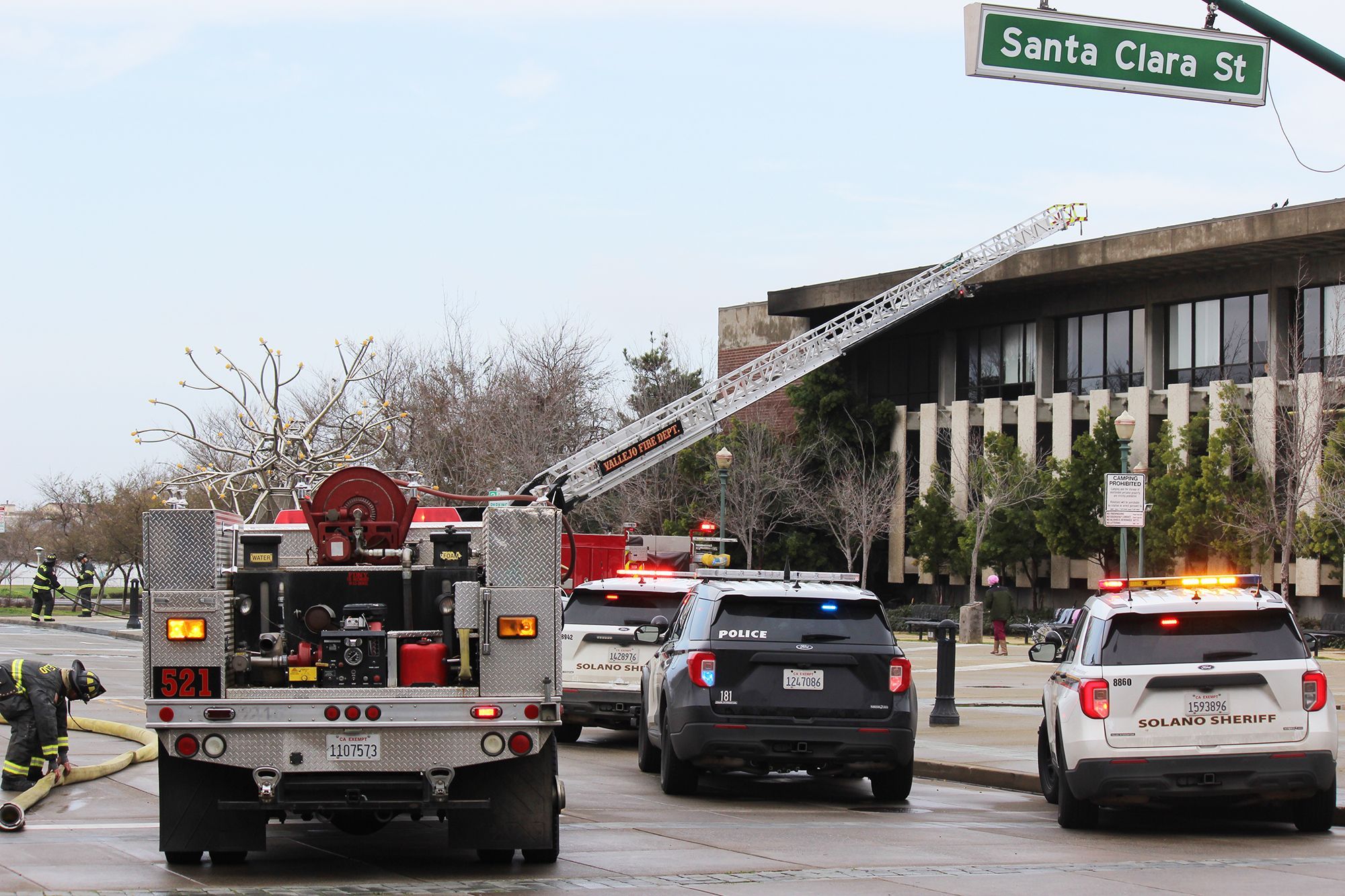 Vallejo firefighters clean up after an early morning fire at the John F. Kennedy Library in downtown Vallejo on Monday. Photo: John Glidden.

VALLEJO – The John F. Kennedy library will be closed until Friday after a tent caught fire outside the building, spreading through a second story window causing damage to library materials early Monday morning.

“Between the fire and water, there was minimal damage to the library, books, and equipment,” Melissa Padaca, library marketing and community relations officer, told the Vallejo Sun on Tuesday.

Padaca said the city is working with a restoration company on repairs to the damaged area “which will be off limits to staff and the public,” during that time.

Fire officials previously said that a tent located near the building caught fire which spread to trees and broke a second floor window.

The two-alarm blaze forced the evacuation of the library and nearby city hall.

Firefighters were alerted to the fire at about 9:42 a.m. by bystanders who called to report the burning tent. The fire department was already at the library teaching a CPR class when the firefighters noticed smoke over the top of the building.

The library has been a go-to location for Vallejo’s growing unsheltered population amid torrential rain and wind as the city has struggled to provide services to its homeless residents.

Hours after the fire broke out, the city announced that it would open an overnight warming shelter Monday and Tuesday nights from 8 p.m. to 7 a.m. inside the Vallejo Room on the first floor of the library in anticipation of another incoming storm. The shelter opened Monday despite the library being closed.

The city said that those needing a free ride to and from the warming shelter can use the SolTrans bus system by telling the driver that they are “traveling to or from the Vallejo warming shelter."

Officials further said that “participants are encouraged to bring their own blankets, although there will be a limited number of blankets and pillows available.” Participants will also be allowed to bring one small bag of personal items as space is limited.

So far, Vallejo has not seen any major flooding or damage related to the storms that have ravaged California in recent weeks, causing mudslides, flooding and evacuations throughout the state. President Joe Biden declared an emergency in several California counties on Monday, including in nearby Napa, Sonoma and Sacramento counties, but not in Solano County.

The most substantial damage in Vallejo was caused last week, when three trees fell on homes, in two cases trapping the residents inside.

The city of Vallejo Public Works Department responded to six downed trees on city property last week as well, causing damage to a car, a sidewalk and a light pole.

The Vallejo City Unified School District was also spared any significant damage and students returned to class this week.

“We had a few trees fall, but none of them caused any damage or hit any buildings,” District Spokesperson Celina Baguiao told the Vallejo Sun. “We had a few leaks, but our maintenance team quickly patched them up and we were ready to welcome students and staff back (on Monday).”

With flooding as a major concern in the Vallejo area, the Vallejo Flood and Wastewater District Spokesperson Jennifer Kaiser Nelson said Wednesday the district has gone through more than 8,000 sandbags and almost 100 tons of sand.

The district offers free self-serve sandbags at its headquarters, located at 450 Ryder St. Meanwhile, sandbags are available in the city of Benicia at the Benicia Corporation Yard, 2440 E. Second St.

Nelson further said the "sewer and storm drain systems have performed quite well given the length and intensity of the storms."

She said there was minimal flooding issues but a storm drain at the intersection of Rice and 14th street collapsed.

"Our Field Operations crews worked quickly to replace a 75-foot section of storm mainline, eliminating the flooding issues," she added.

Most of the Bay Area, including Vallejo, remained under a flood warning through Tuesday and a flood watch through Wednesday as the atmospheric river continued to hit the region, according to the National Weather Service.

Editor's note: This article was updated on Jan. 11 to include additional information from Jennifer Kaiser Nelson, spokesperson for the Vallejo Flood and Wastewater District.