Questions were relayed from smaller groups and hand-picked to be presented to Chief Shawny Williams. He only took four questions
Share this news on: 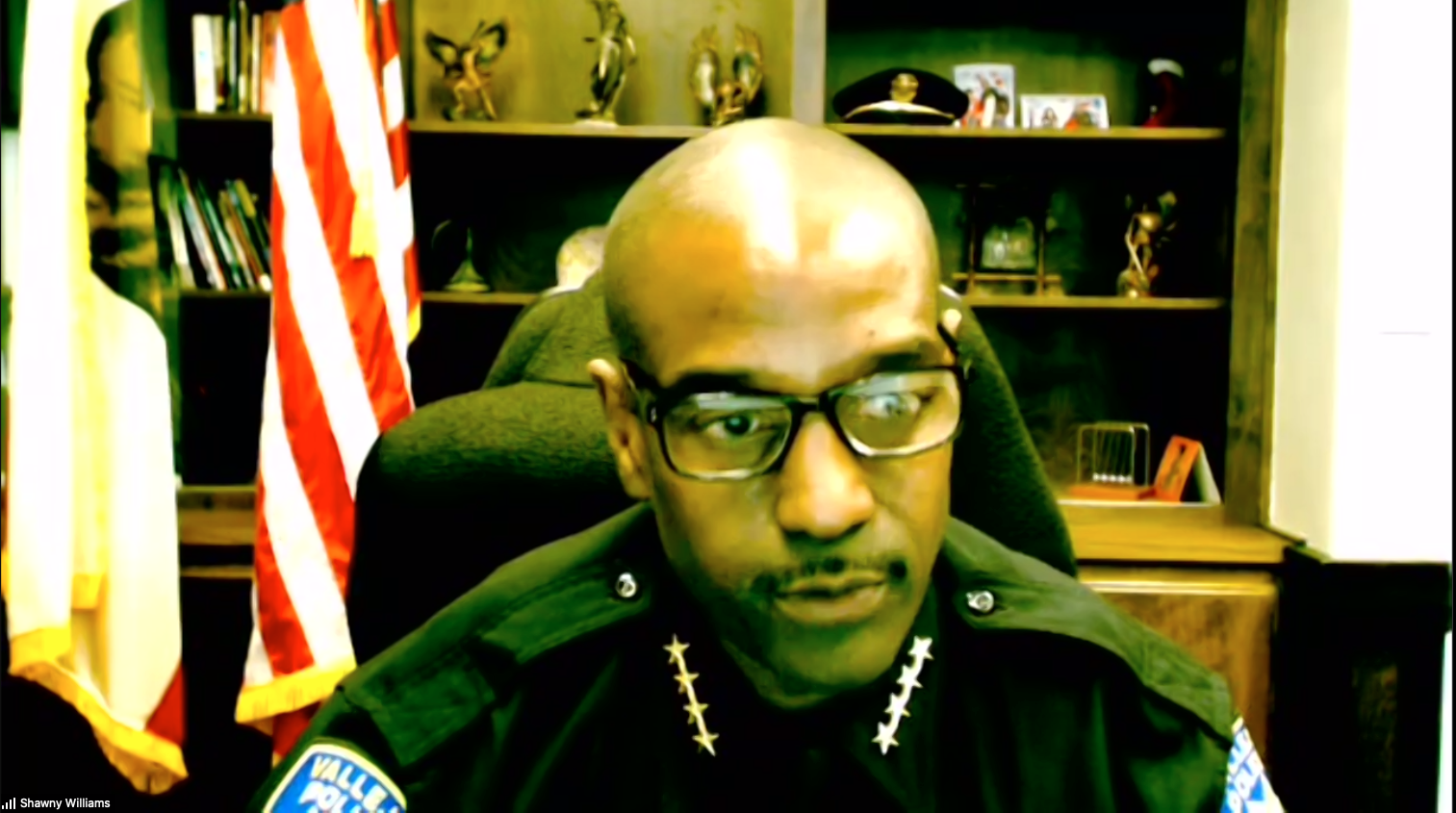 VALLEJO – The Vallejo Police Department took full advantage of the virtual format of a town hall meeting on Wednesday as only police officers or members of the chief’s Community Advisory Board were allowed to address the entire group.

Instead, questions were relayed from smaller groups and hand-picked to be presented to Chief Shawny Williams. He only took four questions from the 10 groups, so the vast majority of the approximately 100 people in attendance were not able to ask a question.

The smaller groups’ discussions were recapped by moderators from the chief’s advisory board or police command staff, who appeared to present sanitized versions of the group discussions, omitting criticism and highlighting department talking points about department staff limitations and engaging in neighborhood watch groups.

The meeting was limited to discussions of gun violence and quality of life issues – including homelessness, sex work and illegal dumping – while concerns about other issues were largely omitted from the discussion.

Most notably, there was no discussion of use of force by Vallejo police officers, which has been a major source of criticism of the department that uses that force at higher rates than similar departments in Northern California.

The forum was initially intended to be an in-person meeting at city hall, but the department changed the format late last week to a virtual meeting, citing COVID concerns. Some community members have raised concerns following the Vallejo Sun’s reporting that only 18% of Vallejo police officers have submitted proof of their vaccination to the department.

In opening remarks, Williams made a plea to reduce gun violence, calling it a public health crisis and pointing to recent examples where children had been shot, including an 8-year-old girl who was shot in a car on June 30. She survived.

“Senseless gun violence has shattered many lives in Vallejo,” Williams said. “Multiple families have been impacted by the cycle of trauma on our community.”

After town hall attendees were moved to smaller “breakout” groups, police officers or members of the chief’s advisory board gave recaps of those discussions to the larger group.

But they omitted criticism of the department and their recaps focused on many of the police department’s talking points of the evening: advocating for neighborhood watch groups, more officers, and more surveillance technology such as cameras, license plate readers and Shotspotter gunfire detection systems.

Others advocated for more holistic approaches to gun violence, with youth services and beautification projects to prevent young people from becoming engaged in criminal behavior.

And some wondered why police were not able to answer many calls for service, which police officers attributed to staffing issues – the subject of a post by the Vallejo Police Officers Association earlier in the day.

“We do things based on a priority level and the higher priorities,” police Lt. Sanjay Ramrakha said. “We have to respond to them first and, unfortunately, some of those other things get left behind.”

Sgt. Richard Wanzie said that in his group at least one person who advocated for funds for mental health services questioned whether money police funding was well spent. “No more money to go to officers until we understand where the money is going and if it would be better spent on programs,” Wanzie said, relaying the group’s comments.

While the meeting did leave space for general questions at the end of the event, Williams only answered four questions, which were picked by community and volunteer coordinator Shelee Loughmiller. They included, “Can you further explain how the community can be involved?”

The department emphasized that solutions to gun violence included reactive measures like Shotspotter gunfire detection systems – which has faced questions about its accuracy – cameras and increased enforcement and arrests. But the department did not address intervention efforts aimed at preventing violence, such as the Ceasefire program, which was credited with a dramatic reduction in gun violence in Oakland.

“We know that we can't arrest our way out of these issues,” Vallejo police Capt. Jason Potts said, echoing similar comments police around the country make on a variety of topics, “but it’s really important to incapacitate these folks that are committing these heinous acts.”

The department promised other town halls on other topics in the future.

“Our folks are starving to engage with the community,” Potts said. “We’ve had some issues with that in the pandemic, but we want to get back into it.”