The arbitrator’s decision clears the way for the brash union president to return to the department after nearly two years.
Share this news on: 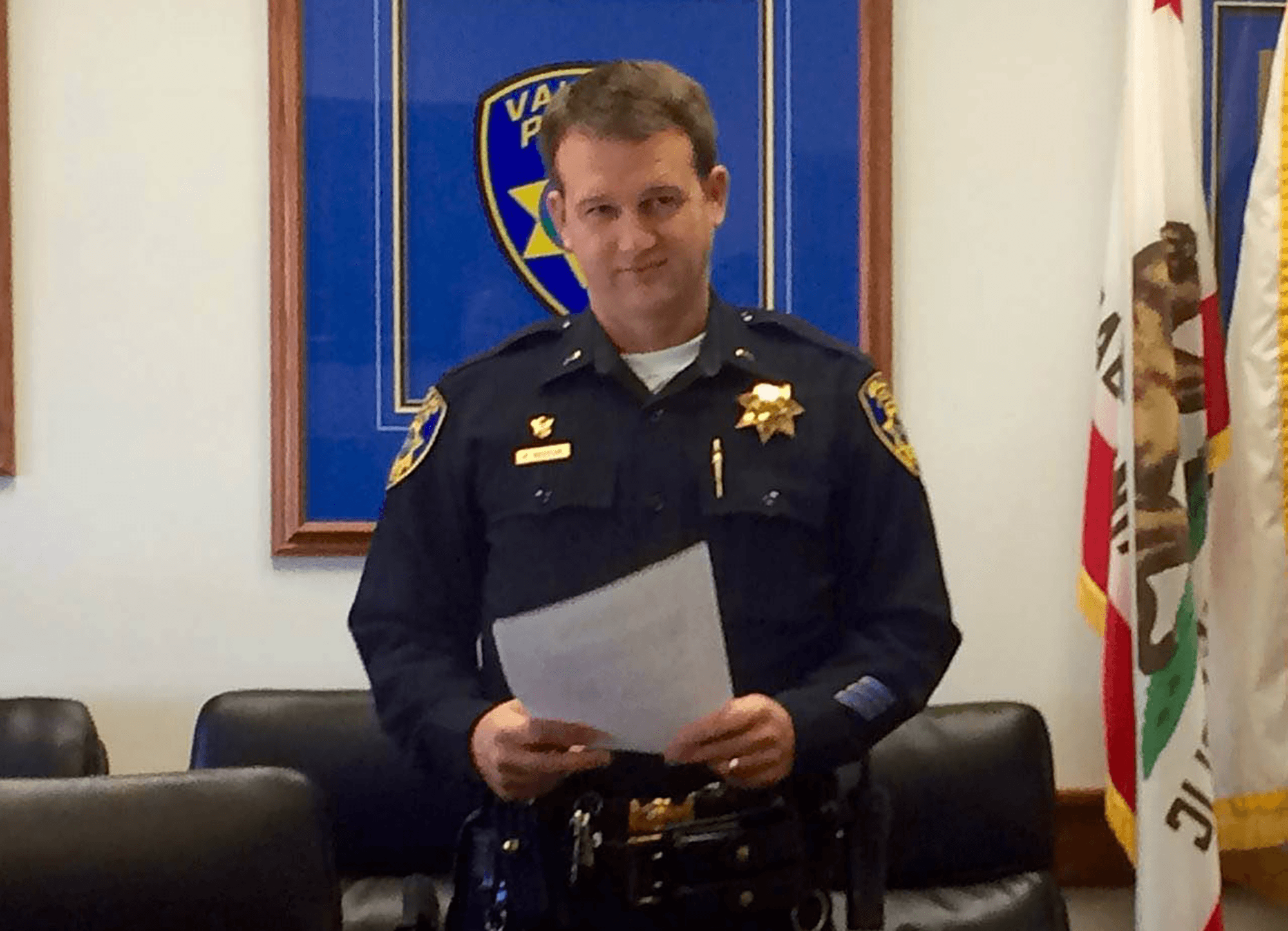 VALLEJO – An arbitrator overturned the termination of Vallejo police Lt. Michael Nichelini, the president of the Vallejo Police Officers’ Association, who was fired last year after a string of controversial incidents including an alleged threat against a journalist, his attorney said Friday.

Rains said that Williams fired Nichelini for protected actions undertaken in his capacity as union president, despite a memorandum from the city’s human resources director. “[Williams] just fired him on his own and the city let him do it,” Rains said. “This is one of the craziest cases I've ever had.”

The arbitrator’s decision clears the way for the brash union president to return to the department after nearly two years. Nichelini’s public statements have regularly been a source of controversy for the department as he has pushed back on negative reporting on the department, criticized journalists, and defended officers’ high rates of force.

It also undoes another high-profile decision by Williams, who resigned suddenly last month after a monthslong campaign by the VPOA for his removal, including a vote of no confidence in his leadership.

Williams also attempted to fire Lt. Herman Robinson, who was reinstated after an arbitrator’s decision, and Detective Jarrett Tonn, who killed Sean Monterrosa in June 2020. In Tonn’s case, a mandatory review hearing found that termination was excessive, but Williams proceeded with it anyway. Tonn is expected to appeal the decision to arbitration.

Nichelini was placed on leave in July 2020 for allegedly destroying the windshield that Tonn fired through in the Monterrosa shooting, but was later cleared of any involvement in the windshield destruction. Then-Lt. Fabio Rodriguez was disciplined.

Rains told the Sun on Friday that in his opinion Williams “wrecked the department.”

“He lost his entire management staff, no one wanted to work there,” Rains said. "There was a loss of highly trained leadership."

Rains said that Williams attempted to fire Nichelini for two reasons.  The first was for sending an email to VPOA members that contained an image of a Vallejo police badge with what appeared to be a swastika from 1906, long before the Nazis co-opted the symbol.

Rains said sharing the image did not have racist intent and was an accident. Nichelini had found the image on Google and used it to illustrate an email without realizing that the badge had the image of a swastika on it.

The second was sending an email from the union’s email account to then-San Francisco Chronicle columnist Otis R. Taylor following his announcement that he was leaving to take a newspaper job in Atlanta in late 2020.

“Looks like 2021 will be a little bit better not having your biased and uniformed [sic] articles printed in the newspaper that only inflame the public…you have never looked for the truth in any of your writings…We will warn our Georgia colleagues of your impending arrival,” Nichelini wrote in the email to Taylor.

Rains said the email was not a threat and that Nichelini was saying he would tell police officers in Georgia, “Don't even bother talking to him because he won't do fair reporting.”

“Both of those were events that Mike did in his capacity as president of the POA,” Rains said. “Those activities are protected and the arbitrator said there was no basis for the chief to use those activities as union president to fire him."

Taylor, who returned to the Bay Area and is now an editor at KQED, said in a statement on Twitter that he had “moved forward.”

“Unfortunately, the City of Vallejo won’t be able to do the same as long as the police aren’t held accountable,” Taylor said. “Reform can’t happen without removing the obstacles to reform.”

Rains said the arbitrator also overturned a separate 40-hour suspension against Nichelini for allegedly harassing civil rights attorney Melissa Nold by recording her with his personal cellphone during a city council meeting.

Rains said that Nichelini was monitoring a protest in the meeting and was using his body camera to record protesters in the front of the room and was also attempting to monitor Nold, who was to his side. The arbitrator determined that Nichelini should not have used his personal cellphone for that purpose without prior permission from the chief, but reduced the discipline to a written reprimand, according to Rains.

Nold told the Vallejo Sun that she was “not surprised” with the arbitrator’s decision as the city has failed to take the steps necessary to remove problem officers.

Nichelini is pursuing a $10 million lawsuit against the city of Vallejo. He originally filed the lawsuit seeking $7.5 million in damages in early March 2021 alleging he was subjected to harassment, retaliation and intimidation by top-ranking Vallejo city officials, including Williams.

After he was fired and went on to amend the complaint seeking $10 million and his job back. The case is in mediation.

Michael Nichelini had a controversial tenure in Oakland and was subject to several excessive force allegations.

In December 1999, Nichelini fractured a woman’s shoulder while he was arresting her husband, according to records obtained by the Vallejo Sun through a public records request.

The man had allegedly committed an assault, and as Nichelini was arresting him, he said that the man’s wife approached him yelling at Nichelini to let the man go. Nichelini alleged that he yelled at her to step back, but she swung her arms and punched him. Nichelini grabbed her and she “twisted and contorted her body” until Nichelini heard a “popping sound,” Nichelini said, according to his use of force report.

The woman denied that she had swung at Nichelini and said that he grabbed her by the shoulder and the wrist and spun her around to the police vehicle, and she heard her shoulder “pop.” She was taken to a hospital and doctors determined her right shoulder was fractured.

Later, Oakland’s Citizens Police Review Board recommended that Nichelini be suspended for two days and reprimanded orally for a May 2, 2004, incident when he used profanity while ordering a teen out of his truck after citing him for a suspended license, according to the Oakland Tribune. The board also found Nichelini used his knees to hit the teen’s head against the pavement.

Then an internal affairs investigation sustained two policy violations for an incident when Nichelini responded to a sideshow on Nov. 14, 2004, and recommended that he be placed in a position with minimal citizen contact and that his fitness for duty be evaluated.

The officers had stopped a Buick that they said had been blocking traffic to the intersection of 90th Avenue and MacArthur Boulevard. According to the officers’ account, as Nichelini spoke to the passenger, they got into a struggle and Nichelini pepper sprayed him. They both fell to the ground. Nichelini and Officer Steven Thurston handcuffed the man and arrested him. In jail, the man told medical personnel that he had a separated shoulder that was re-aggravated during his arrest.

But the man who was arrested told investigators that they had been stuck in traffic while the sideshow was happening. When Nichelini approached, he asked the passenger “What you got on you?” and he responded he didn’t have anything on him. Nichelini then ordered him out of the car and he asked why. Nichelini then hit him twice with a flashlight and put him in a headlock. Nichelini released the headlock and pepper sprayed him.

Nichelini said, “how do you like that, bitch?” threw him out of the car, slammed him on the back of the car, and then on the ground, according to the interview. The man screamed that he had a separated shoulder, but Nichelini said he didn’t care, handcuffed him, and picked him up by both arms. While driving to the police station, Nichelini looked at the people still on the street and said, “Look at all these savages out here!” according to the interview.

A letter from then-Deputy Police Chief Gregory Lowe said that Nichelini was disciplined for failing to properly raise the person to his feet after handcuffing him and making a derogatory and insensitive comment during the arrest. A mandatory review hearing reduced the recommended discipline from 15 days to 6 days' suspension.

Despite that, the elder Nichelini claimed when he hired his son in Vallejo that he had faced no discipline during his time in Oakland.

“There was no discipline from either case,” Robert Nichelini told the Vallejo Times-Herald in 2006, referring to the two incidents in 2004. “He has a perfect record. (Oakland) didn’t want him to leave. His background is clean.”

Nichelini went on to become an influential figure in the department himself, being promoted to lieutenant and then becoming the union president in early 2019 when longtime VPOA President Det. Mat Mustard suddenly resigned from the position.