A lieutenant was disciplined for authorizing the destruction of the windshield.
Share this news on: 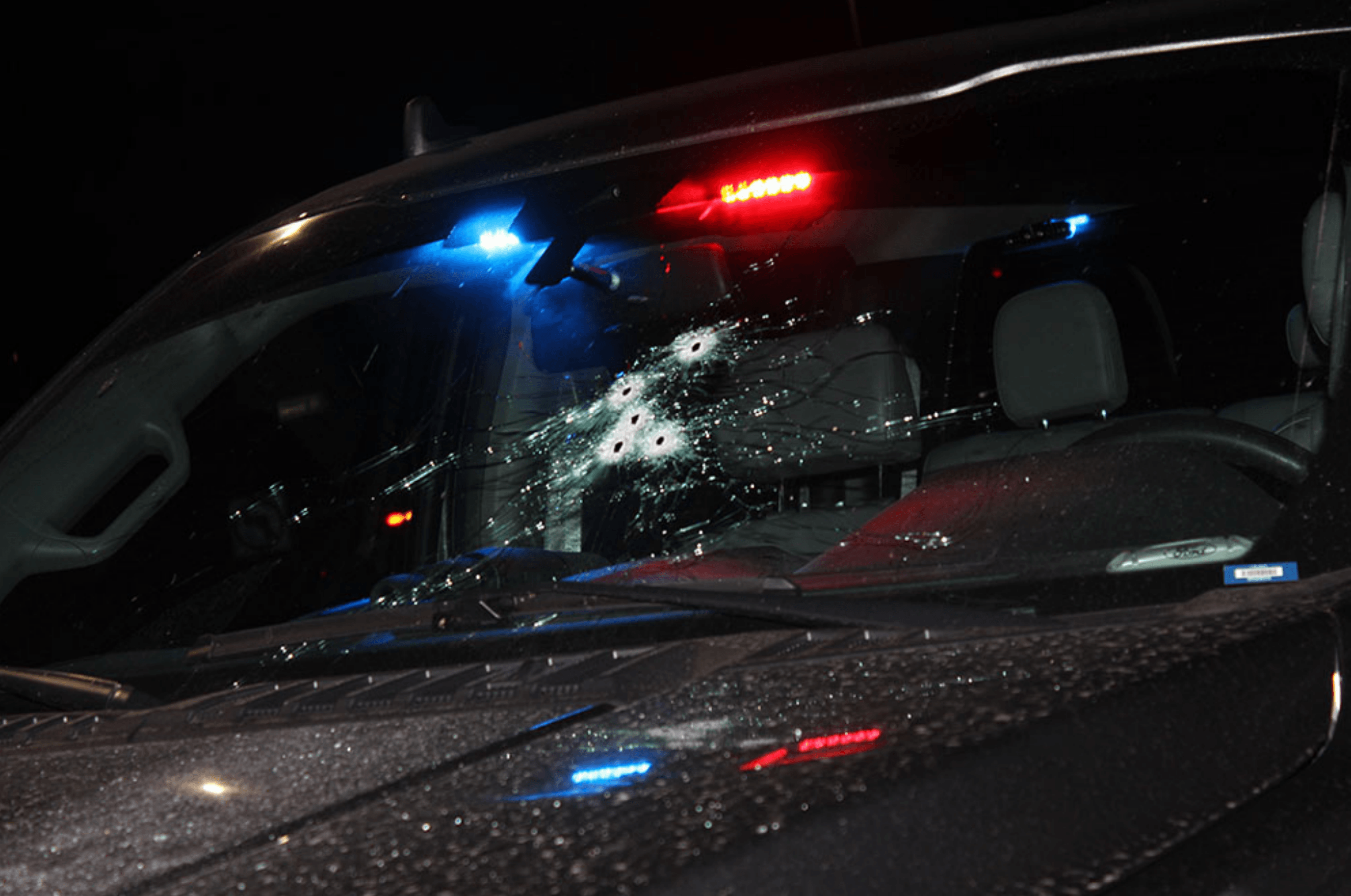 VALLEJO – Hours before Vallejo Police Chief Shawny Williams publicly confirmed that one of his officers shot and killed a man outside a local Walgreens, members of the police force had already begun the process of removing a critical piece of evidence, newly released records show.

On Thursday, the Vallejo Police Department released a batch of records from the investigation into the fatal shooting of Sean Monterrosa by Vallejo Police Det. Jarrett Tonn during the early morning hours of June 2, 2020.

Tonn was seated in the back seat of an unmarked police pickup holding a SWAT-issued automatic Colt M4 Commando rifle when he, along with two other officers, responded to reports of looting at the Walgreens. Tonn fired five shots through the windshield, striking Monterrosa once in the back of the head, killing him nearly instantly.

The newly-released records included a repair estimate for replacing the damaged windshield sent to police Det. Kevin Barreto at 11:26 a.m. on June 3, 2020 – 35 hours after Monterrosa was shot and 3 hours before Williams would confirm that Monterrosa was dead.

Police Sgt. Jerome Bautista – who has since been promoted to lieutenant – forwarded the estimate an hour later to police staff informing them that the truck would soon be repaired.

It wouldn’t be until 3 p.m. on June 3 – nearly 39 hours after the shooting – when Williams confirmed that Monterrosa was dead.

Civil rights attorney Melissa Nold, who was the Monterrosa family’s attorney at the time, discovered a month later that the windshield was destroyed and the vehicle had been put back into service. Then-California Attorney General Xavier Becerra launched an independent investigation of the alleged destruction of evidence. The Attorney General’s Office has yet to announce the conclusions of that review.

Following discovery that the windshield had been destroyed, Vallejo police lieutenants Michael Nichelini and Fabio Rodriguez were placed on paid administrative leave.

Rodriguez, who was responsible for coordinating the investigation with the Solano County District Attorney's Office, was disciplined for allowing the windshield to be replaced.

The disciplinary notice was also part of the trove of documents released by the city on Thursday. In it, Williams chastised Rodriguez for not speaking with the DA’s office prior to approving the destruction of the windshield, nor consulting his superior about “this critical decision.”

Rodriguez told an investigator looking into the destruction of evidence that he “didn’t think twice” about giving permission to destroy the windshield and that he determined it had no “evidentiary value.”

Williams agreed with the investigator’s findings that Rodriguez “failed to provide proper foresight and direction to preserving the windshield for potential future examination in criminal or civil proceedings and had a duty as a risk manager representing the city of Vallejo.”

During Rodriquez’s “Skelly” hearing – a hearing for law enforcement officers facing discipline – the chair concluded that the lieutenant should receive corrective action instead of discipline. Skelly chair Marc Fox said Rodriquez had committed “neglect of duty” and unsatisfactory work performance as the basis for the corrective action. He disagreed with the other findings from Williams.

“While I disagree with the lieutenant's decision, it was a decision he was authorized to make,” Fox wrote. “On a finer technicality, the police truck in question was never entered as evidence and if never entered into the system as evidence, then it could not be disposed/released from evidence.”

Rodriquez also told the department investigator that Nichelini had nothing to do with the destruction of the windshield. Nichelini — who at the time oversaw the department’s patrol division and continues to serve as president of the Vallejo Police Officers Association — was fired in March 2021 after sending a threatening email to a local journalist and for emailing members of the union an image of a 1906 city police badge which was inscribed with a swastika.

Vallejo police have yet to name Tonn as the shooter. The city has redacted the names of all officers involved in the shooting, despite that their identities have already been widely made public, including in local news outlets and the New Yorker. The Vallejo Police Officers Association filed a petition in Solano County Superior Court last year to prevent the department from naming Tonn, saying he had received threats. That suit is ongoing.

The department hired Southern California-based firm the OIR Group to conduct the administrative investigation into the incident. It concluded that Tonn violated department policy for his use of deadly force, which investigators found was unreasonable. OIR also determined that all three officers in the truck that night did not adequately plan or communicate, which led to a dangerous situation. All three detectives plus Capt. Lee Horton were found to have violated policies for failing to de-escalate the situation and unsatisfactory work performance.

Bretton Wagoner and Wesley Pittman – the other two detectives in the vehicle – were found to have violated policies for not turning on body cameras.

The investigation was completed in June, but no officer received any disciplinary notice until this month. The department moved to fire Tonn on Dec. 1 and sent Pittman a written reprimand on Dec. 8 for his actions that night.

“Your failure to activate your body-worn camera until after driving into the parking lot and the shooting is not only a violation of departmental policies but it also undermines the department’s commitment to transparency and accountability and potentially deprives investigators of important evidence,” Williams wrote in Pittman’s reprimand.

Meanwhile, Wagoner left Vallejo police for the Napa County Sheriff’s Office in September. Horton retired in November about  a week before the city released the OIR report. Tonn and Pittman remain employed in Vallejo, according to the Vallejo Police Officers Association website.

Drone flying over scene had problems before

The department also released new records regarding a drone operated by William White, a Medic Ambulance supervisor, that was flying over the Walgreens at the time of the shooting. In addition to the windshield’s destruction, questions about what happened to the drone’s footage have raised further questions about the department’s handling of evidence in the shooting.

The Vallejo Sun previously reported that the drone’s files had been “overwritten” with zeroes. An expert who examined the records said that it appeared they may have intentionally been erased.

In an interview released by Vallejo police earlier this month, White told investigators that he had witnessed the shooting through an iPad controlling the drone.

In a subsequent recorded interview with Detective Kevin Rose, newly released by the department on Thursday, White said that after he returned the drone to the nearby Medic Ambulance Service building, he had to leave on a call. Understanding that the drone now had important evidence, he asked a colleague to watch it and not power it down while the drone wrote video files to his iPad.

“I've I've had issues where I've flown it before, so when they told me the file corrupted, I was like of course that would figure,” White said. “I've had that happen before."

He also said that the drone had a cloud backup through DJI, its manufacturer, but if the files were corrupted on the iPad he would not expect them to be intact on the cloud. Still, he said that detectives might have been able to retrieve the video directly from the drone by connecting it to a laptop, but even then at times he has found the drone recorded files that were totally corrupted.

Investigators said that they were unable to recover any information from the drone.

“The recovered video files from the external flash media were corrupt and unreadable,” Steven Baskerville, a Secret Service agent working at the National Computer Forensics Institute Lab at the University of Tulsa in Oklahoma, wrote in his report. “Additionally, the video files of interest had no content.”

Scott Morris contributed to this report.