Family members of men shot and killed by Vallejo police briefly shut down the meeting to demand the involved officers be held accountable.
Share this news on: 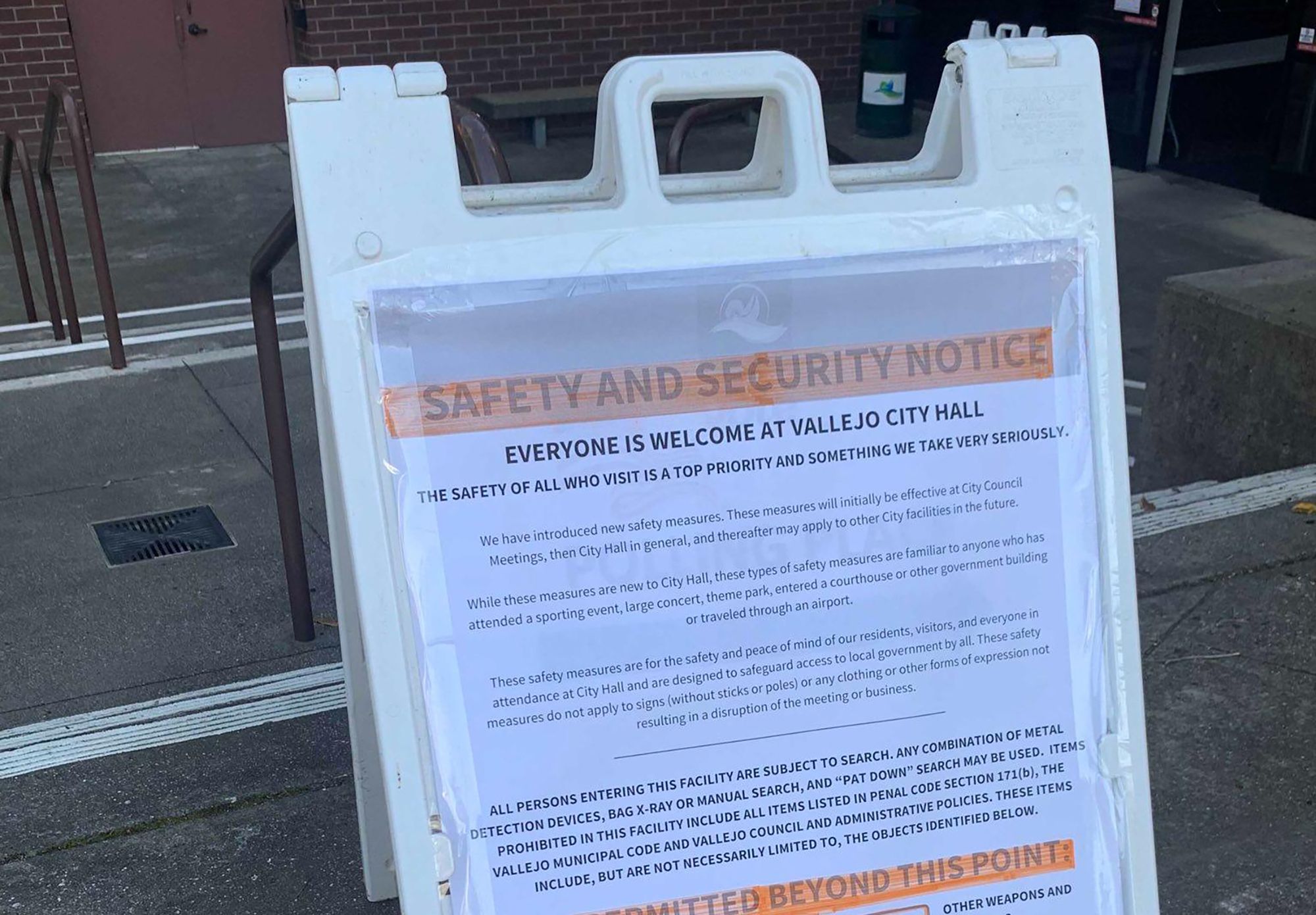 VALLEJO – The city of Vallejo announced new security measures at city hall ahead of Tuesday’s city council meeting. They come two weeks after family members of men shot and killed by Vallejo police briefly shut down the meeting to demand the involved officers be held accountable.

Citing other cities that have implemented similar new safety measures to protect community member’s “physical and psychological” safety,  Interim City Manager Mike Malone released a statement 12 hours before the council meeting, saying “The new security measures are intended to provide increased safety and peace of mind to attendees and to safeguard access to local government by all.”

Vallejo city spokesperson Christina Lee said the city has been working toward improving security at city hall since the early days of the COVID-19 pandemic.

“The March 8 City Council meeting, while, yes, very lively, was not a deciding factor in our efforts to improve the safety and security for our community and staff,” Lee said. “More recently, City leadership did begin receiving feedback from staff and community members alike that they were uneasy at City Hall stemming from a variety of recent events that had occured, such as the breaking of windows at City Hall.”

Lee also said anyone who doesn’t possess a city key card is expected to go through the new security process.

Family members of men Vallejo police recently killed showed up to the March 8 council meeting, briefly shutting it down, as they confronted city leadership and Vallejo Police Chief Shawny Williams.

The angry families demanded the city fire officers who bent their badges following a fatal shooting to celebrate the occasion and they also came to demand the council reject a plan from staff to seek a $30 million loan through the California Infrastructure and Economic Development Bank (IBank), to fund, design and retrofit work for 400 Mare Island Way, a two-story building on the city’s waterfront.

Mayor Robert McConnell said the changes, to his understanding, were “not in response to the disruption and ultimate recessing of the council meeting” on March 8.

“These measures really are more an unfortunate sign of the times. We all hope for a cooperative exchange to solve the never ending challenges we have,” McConnell said. “Unfortunately all of society in these difficult times has been compelled to realize that we now live in an environment where some individuals feel free to do as desired or impulses compel. Accordingly, the greater numbers of society must bear the burden, costs, and consequences.”

McConnell said he wasn’t aware of any councilmembers asking for the added security, but said some “did express concern,” about “yelling, shoving, and destruction of taxpayer equipment.”

The city’s news release also didn’t elaborate on what the psychological issues city staff and the community faced at city hall that necessitated the change in security procedures, which now requires persons to enter through a checkpoint on the first floor of city hall. There the person is subjected to having a metal detector wand passed around their body and a visual inspection of the contents of any bags.

Those leaving the meeting can exit through the second floor door that is located right next to the council chambers.

Sorce chided the council and city staff for closing off one of the two speakers’ podiums to the public, mandating that the public place their speakers’ cards in a box on the dais instead of handing them to the city clerk and having persons go through a security check to access city hall.

“What is this? What is happening right now? It chills access,” Sorce told the council.

Sorce said many didn’t want to have a security wand near them because of bad experienced in the past with law enforcement and the new security measures “exacerbates this rift between council, and staff, and the community.”