The plan includes moving library services to a two-story office building on the waterfront at 400 Mare Island Way.
Share this news on: 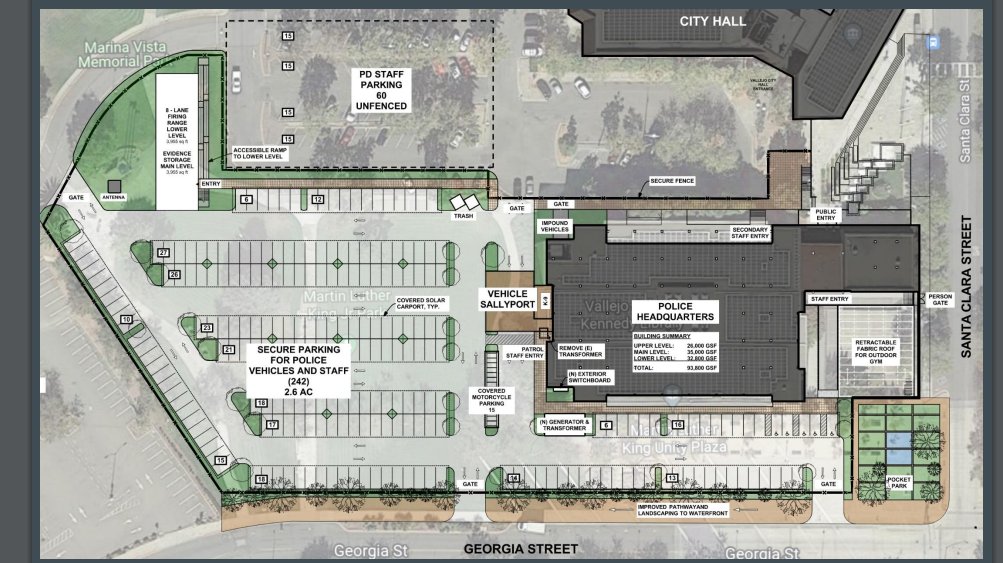 VALLEJO – The Vallejo City Council moved forward Tuesday with a plan to relocate the Vallejo Police Department headquarters from its dilapidated building on Amador Street to the John F. Kennedy Library in downtown Vallejo.

No formal vote was taken by the council during its meeting as the council, instead, gave general consensus on a plan which includes moving library services to a two-story office building on the waterfront at 400 Mare Island Way, which was previously expected to be the site of the new police headquarters.

In April, the council ordered a $150,000 feasibility study to analyze potentially swapping buildings after the council reversed course on moving police services into 400 Mare Island Way following community criticism with the proposal.

On Tuesday, the council got the results from that study, which found that it will cost Vallejo nearly $90 million to retrofit the two buildings, with $69 million needed to renovate the library building for police use, and $20.7 million to retrofit 400 Mare Island Way for library use.

Tuesday’s staff presentation had no information about how the city would pay for the renovations.

“I can’t answer the question specifically on what the financing would be that we would recommend,” said City Manager Michael Malone. “We didn’t really explore financing options at this time, because of the number and not knowing where the council would land. We would go out and look at all options available once we got direction.”

Assistant City Manager Terrance Davis said he wasn’t sold on the plan to eliminate the park with a fenced off section behind the current library.

“When I saw this the first time, if I had hair, I would have pulled it out,” Davis said. “I said ‘no, we don’t want to lose green space.’” Davis said it was necessary to include a sallyport and have the ability to secure police assets.

During his staff report, Davis said the JFK building, which opened in 1970 as the city’s main library, has issues. He noted that the three-story building has $5 million in deferred short-term maintenance, with a need to repair the HVAC system, installing “seismic restraint,” replacing the solar panels on the roof, and mitigating possible asbestos. Davis said the two elevators in the building require upgrades.

Many of the council members expressed support for the potential swap.

“I still think that JFK makes the most sense for us in terms of relocating the VPD,” said at-large Councilmember Pippin Dew. “I personally think 400 Mare Island Way, as I’ve said many times, is an amazing location for our library to have that community connection to the waterfront.”

Dew offered up a solution with the possible creation of an Enhanced Infrastructure Finance District, a governmental entity established to create a funding mechanism which can facilitate the construction of public infrastructure improvements in the area covered by the district. The funding would come from a portion of the property taxes that the city receives from the area.

“You can argue with me all you want, anybody who feels that they need to stay where they are at, and I just won’t agree,” Loera-Diaz said. “If you’ve ever been inside there, it’s a place where I wouldn’t have one of my kids work.”

Almost everyone – including councilmembers, city staff and community members – all agreed that the current police headquarters at 111 Amador St. is not suitable due to multiple issues with the building. Staff has previously stated the location has outdated HVAC systems, along with lead and asbestos issues.

Vallejo purchased the 400 Mare Island Way property for $13.5 million in early 2019 with the expressed intent of transforming it into a new police headquarters. Opponents argue the department shouldn’t be rewarded with a new building while it is being investigated for a number of police shootings and killings, and they question the location of the building near the water as sea levels rise due to climate change.

Many public speakers on Tuesday raised similar points, with a few saying it made sense to retrofit 111 Amador St.

“The police station should be where it currently is. It’s central. It’s near all the freeways. There is a big parking lot,” said Andrea Sorce, who recommended a phased retrofit and rebuild on the Amador site. “Get police oversight in place first.”

Most of the council said it was not feasible to rehabilitate the Amador location.

Other speakers supported the swap, saying they were tired of the lack of movement in the process.

“We really gotta get something done, here,” said a speaker identified as Kenneth P. “ It’s been three years since this whole thing started.”

In March, the council was poised to approve taking out a $30 million loan from the California Infrastructure and Economic Development Bank (IBank), to fund design and retrofit work for 400 Mare Island Way as the new police headquarters. However, the council ordered the new feasibility study when community members demanded the city consider other locations.

In response to a question from Vice Mayor Rozzana Verder-Aliga, District 1, Malone said that the city couldn’t seek the entire $50+ million from IBank as the loan amount tops $30 million.

Verder-Aliga expressed concern that with interest rates rising, the loan “will cost taxpayers.” She also had concerns about the direction of the council as Dew, and fellow at-large councilmembers Katy Miessner and Hakeem Brown are leaving the council in a few months.

“My concern is that three of our councilmembers are terming out during the first week of January  so if this current council commits to moving forward… with a library exchange, or swap, we are going to commit our city, our residents for that loan,” Verder-Aliga said.

The vice mayor said she hopes the new council doesn’t reverse the decision. She also said the city needs to “find a place for our dispatchers ASAP. Not next year but as soon as possible.”

Brown said it was necessary for the council to give Police Chief Shawny Williams the tools including facilities and competitive tools he needs to succeed. Brown also mentioned a recent vote of no confidence released by the Vallejo Police Officers’ Association.

Brown further said that having a new police station also matters when it comes to Black lives mattering in the community. He thanked Verder-Aliga for voting ‘no’ with him when the idea of painting Black Lives Matter on Santa Clara Street in front of city hall came before the council in September 2020. The mural was finally painted last weekend.

“If we’re a city that paints Back Lives Matters, while we have high death rates for young Black men, Black kids are not getting the education that they need, they live in a very unsafe environment, then how much does Black Lives Matter?” Brown asked. “And yes, a police station does matter in that regard.”