The ACLU of Northern California sent a letter to Vallejo City Hall on Sept. 10 arguing that the original policy ran “afoul of First Amendment principles” and threatened “to suppress the voices of community members.”
Share this news on: 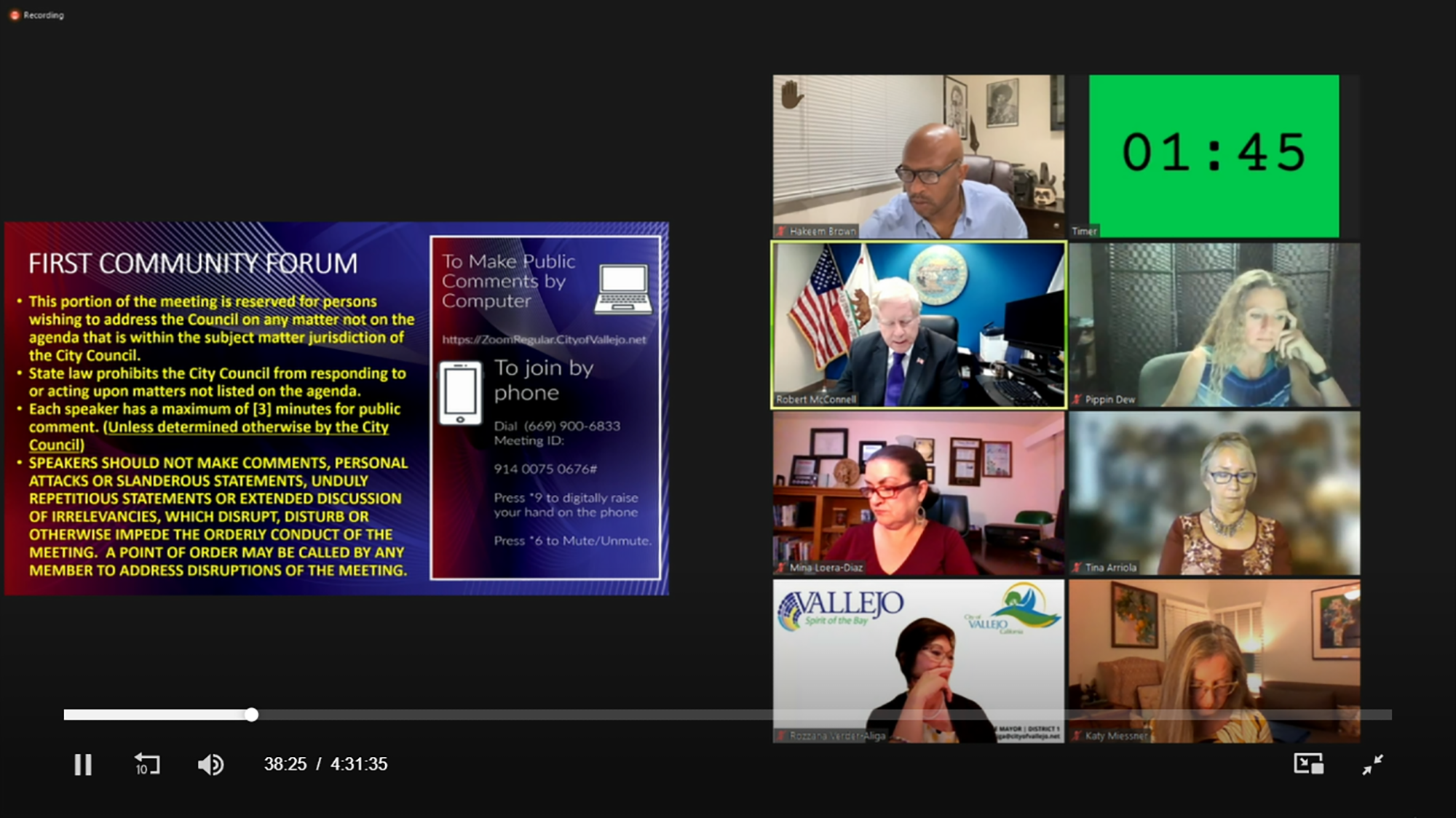 The city of Vallejo amended its public comment policy at a meeting Tuesday after criticism from the ACLU. Photo: Vallejo Sun/screenshot

VALLEJO - Less than a week after receiving a letter from the American Civil Liberties Union over a new controversial public comment policy, the city of Vallejo amended that policy ahead of Tuesday night’s Vallejo City Council meeting.

The ACLU of Northern California sent a letter to Vallejo City Hall on Sept. 10 arguing that the original policy ran “afoul of First Amendment principles” and threatened “to suppress the voices of community members.”

Introduced for the Aug. 24 council meeting, the policy drew the ire of community members and the ACLU for mandating that “speakers may not make personal attacks on council members, staff or members of the public, or make comments which are slanderous or which may invade an individual’s privacy.”

That language was softened with the city swapping out “may not” for “should not.”

Council members are still able to call a “point of order” if a speaker’s comments are believed to be a disturbance.

The incident began when Swift began to address the council, calling the new policy unconstitutional and a suppression of free speech.

“It is the public’s interest to discuss individuals in city hall when their actions affect the community,” Swift told the council. “You can’t separate the individual from the issue when the individual is the issue.”

She went on to mention a sexual harassment and retaliation claim that named the city’s water director, Mike Malone, from when he worked for the city of Sacramento several years ago.

Malone is expected to be named the new interim city manager soon. Current interim City Manager Anne Cardwell announced recently that Oct. 7 will be her last day with the city.

The pair had requested a private meeting with Nyhoff.

“I’m betting Greg won’t meet without me there but I will request it,” Hayes wrote, as reported by the Vallejo Times-Herald. There is no evidence that Nyhoff met with them.

Dew called a point of order when Swift criticized Vallejo City Attorney Veronica Nebb for retaining Chief Assistant City Attorney Randy Risner after it was revealed in January 2020 that Risner was sanctioned by a federal bankruptcy court in 2011.

“How is Risner still on the payroll?” Swift asked. “The fact that he hasn’t been fired should raise concerns about City Attorney Veronica Nebb’s competence and judgement.”

Vallejo Mayor Robert McConnell overruled the point of order stating that Swift’s comments were not disturbing the meeting.

Later in the meeting, Cardwell went on to clarify that Malone was not named in the lawsuit, and that it was normal for city staff to meet with developers.

Likewise, Nebb offered to meet with the public speakers and ACLU to discuss their comments.

Vallejo spokeswoman Christina Lee couldn’t be immediately reached when asked why the policy was changed.

McConnell said following the second community forum at the end of the meeting that the policy was not new as it’s “just a recognition of what has been in our rules for many, many, many years, actually.”