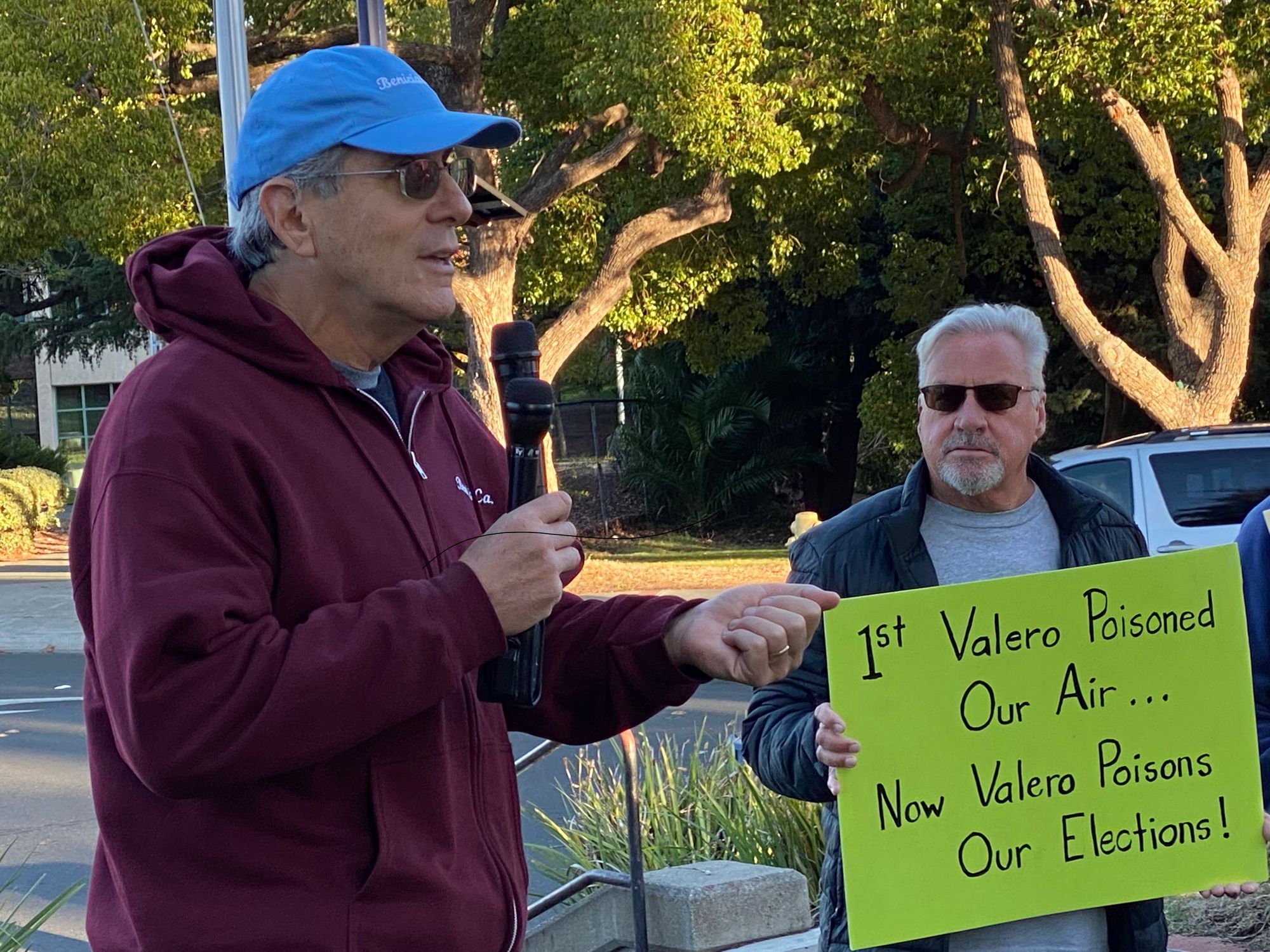 According to expenditure reports filed with the city of Benicia on Wednesday, Valero had spent $89,507.71 supporting the two candidates as of Monday. That included $38,096.43 with Los Alamos-based Trusted Messenger Marketing on mailers and social media ads. That firm spent $10,000 on Facebook ads. Valero  also spent $35,000 with Columbus, Ohio, polling firm EMC Research Inc.

The expenditures were made by a group called “Progress for Benicia, a coalition supporting local jobs and the economy supporting Christina Strawbridge and Lionel Largaespada for Benicia City Council 2022.” Several mailers submitted with the campaign filings identify Valero as the top contributor to the committee and its responsible officer is Paul Adler, Valero’s director of government affairs and community relations.

Valero has owned the refinery in the center of town since 2000 and is a major source of revenue for the Benicia city government, accounting for 20% of the city’s general fund. It is also the city’s largest employer with more than 500 employees. It has been a frequent source of controversy for the refinery’s emissions and its attempts to influence the city’s elections.

Several of the recent mailers credit Strawbridge and Largaespada with leading Benicians “in the fight against COVID-19” and “keeping Benicians safe.” Another says that the incumbent councilmembers “support our first responders.”

Strawbridge and Largaespada are running in a heated campaign against planning commissioner Kari Birdseye, retired executive Terry Scott and retired teacher William “Billy” Innes, who said during a recent candidate forum that he intended to vote for Birdseye and Scott.

Valero previously campaigned against Birdseye when she ran against Strawbridge and Largaespada in 2018. Birdseye narrowly lost that election after the oil giant spent $165,000 campaigning, including on mailers attacking her as a “yes man” for then-Mayor Elizabeth Patterson.

Birdseye, an environmental spokesperson, has been a vocal critic of Valero. While on the planning commission in 2016, she rejected a proposal by the oil refinery to ship crude oil by rail. Valero appealed the decision to the City Council. Strawbridge, who was on the council at the time, also voted to reject the proposal.

Valero also campaigned for Strawbridge when she ran for mayor in 2020, but that time she lost badly to Mayor Steve Young.

This year, Valero faced a major scandal when the Bay Area Air Quality Management District revealed that the refinery had been releasing excess toxic gasses from a hydrogen vent for years, in violation of emissions regulations. Up until October, the refinery had been a major issue in the campaign, but it did not attempt to exert any influence.

The recent mailers have been criticized for being misleading by including portraits of all five current Benicia councilmembers. Young wrote in a letter published on the Benicia Independent that the mailer “implies that all the members of the Council (who are pictured in the flyer) are supportive of their re-election.”

“The fact is that NONE of the current Council (other than themselves) are supporting them,” Young wrote. “Vice Mayor [Tom] Campbell and I are supporting and endorsing Terry Scott and Kari Birdseye for the two open Council seats, and Trevor Macenski has been neutral.”

In a campaign email, Birdseye called Valero’s mailers “deceiving” and called for the city to issue a violation under the city’s fair election ordinances.

“Benicians who aren’t politically active may easily believe the misinformation, fueled by big oil money,” Birdseye wrote. “A campaign that is energized by volunteers and less than $30,000 can’t compete.”

Scott, meanwhile, acknowledged in a Facebook post that it was legal for Valero to support the candidates, but said it was “not fair.”

“I had hoped Valero would have let Benicians elect Benicians without outside influence and money,” Scott wrote.

Strawbridge disavowed Valero’s influence in a statement, reiterating that she had no prior knowledge or influence on the mailers. “No matter what the message is, positive or negative, Valero needed to stay out of the election,” she wrote.

Largaespada said in an email that he also does not want assistance from Valero. “I have never requested support from Valero and have repeatedly requested they not participate in our elections,” he said. “I would much prefer that the elections were left to the individual candidates, without any interference from outside groups.”

By law, Strawbridge and Largaespada’s campaigns cannot coordinate with Valero’s Political Action Committee, which can spend without limits, despite that the campaigns have a $34,000 spending limit.

Editor's note: This story has been updated with the latest expenditure reports from Valero's PAC, which were published on Wednesday.