The fire started in a tent outside the library, which spread to trees above the tent and then broke a second-floor window, damaging books and office equipment inside
Share this news on: 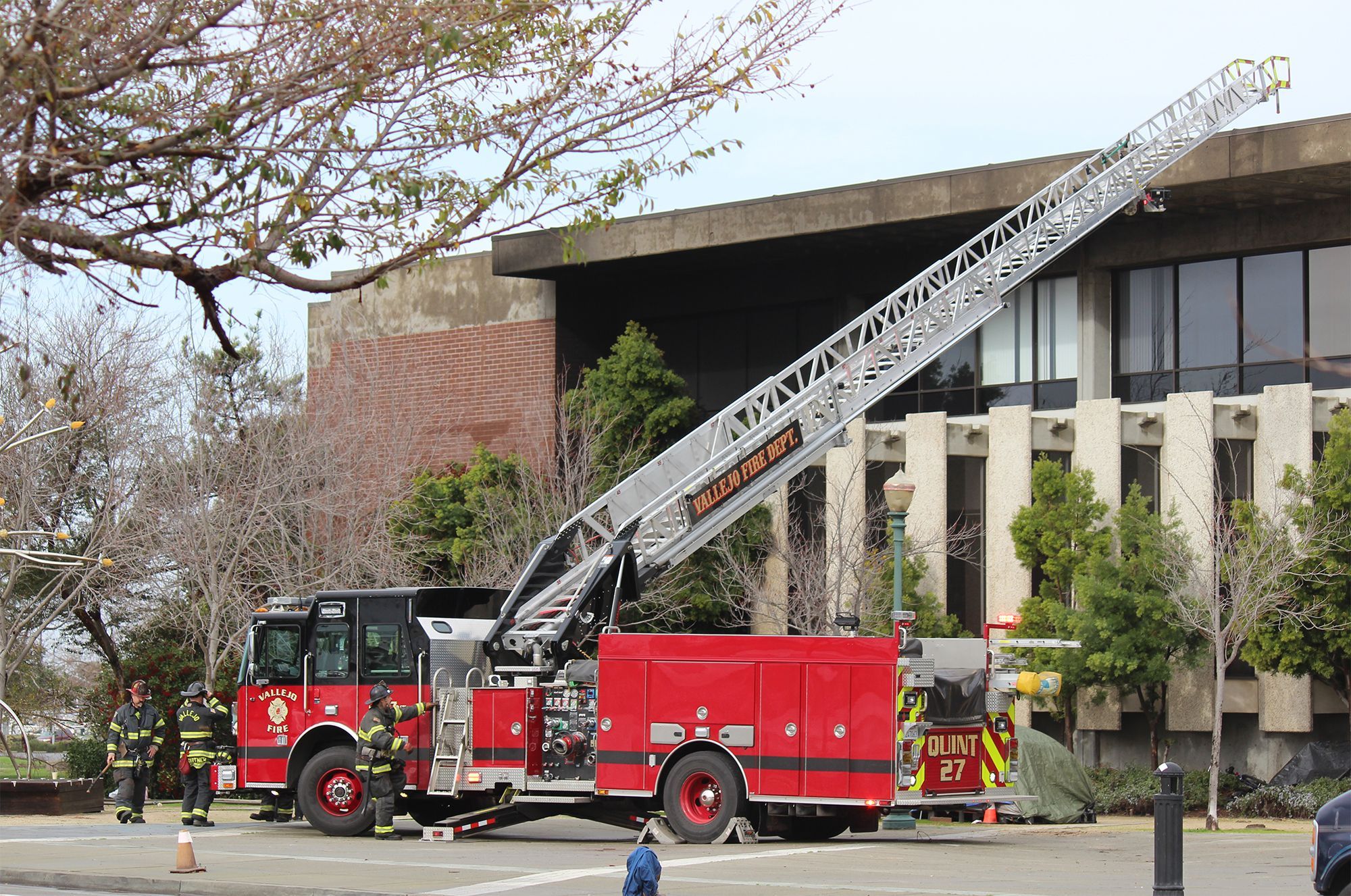 VALLEJO – The John F. Kennedy library in downtown Vallejo is closed Monday after a fire outside the building spread into the second floor.

Vallejo fire Capt. Aaron Klauber said that the fire started in a tent outside the library, which spread to trees above the tent and then broke a second floor window, damaging books and office equipment inside and spreading smoke throughout the building.

Firefighters were alerted to the fire at about 9:42 a.m. by bystanders who called to report the burning tent. The fire department was already at the library teaching a CPR class when the firefighters noticed smoke over the top of the building.

Both the library and city hall were evacuated, and firefighters called a second alarm response, Klauber said.

Fire crews accessed the roof of the three-story building as several unsheltered people mingled outside. The library has become a place to go for the unsheltered during the numerous storms which have battered the region over the last six weeks.

No injuries were reported.

Library officials said Tuesday that the library would remain closed until Friday.

Shortly after the fire broke out, the city announced that it would open an overnight warming shelter Monday and Tuesday nights from 8 p.m. to 7 a.m. inside the Vallejo Room on the first floor of the library in anticipation of another incoming weather storm.

The shelter opened Monday despite the library being closed.

The city said that those needing a free ride to and from the warming shelter can use the SolTrans bus system by telling the driver that they are “traveling to or from the Vallejo warming shelter."

Officials further said that “participants are encouraged to bring their own blankets, although there will be a limited number of blankets and pillows available.” Participants will also be allowed to bring one small bag of personal items as space is limited.

Vallejo and the surrounding Bay Area is under a flood watch through Tuesday as an atmospheric river is expected to continue to move through the Bay Area.

The continued storms prompted President Joe Biden to declare an emergency in several California counties on Monday, including in nearby Napa, Sonoma and Sacramento counties, but not in Solano County.

Vallejo fire spokesperson Kevin Brown said that there weren’t many storm related calls during high winds and heavy rain on Sunday night and Monday morning. He said that firefighters responded to power lines down in North Vallejo which caused an outage at 9:42 p.m., and three traffic collisions that did not cause any major injuries.

Flooding on state Highway 37 west of Vallejo prompted the state Department of Transportation to close westbound lanes of the highway on Monday morning.

Vallejo was largely spared last week when a storm swept past, dumping several inches of rain as winds battered the area, causing about 20 trees or tree branches to bring down power lines. Some larger trees fell into homes causing damage and trapping the residents inside.

Free self-serve sandbags are available 24 hours a day 7 days a week throughout the winter at the following locations in Vallejo and Benicia:

Editor's note: This story has been updated with information about the library reopening.