“Nobody is alleging that there is a conspiracy or any terrorist threats associated with the water department,” said city attorney Veronica Nebb.
Share this news on: 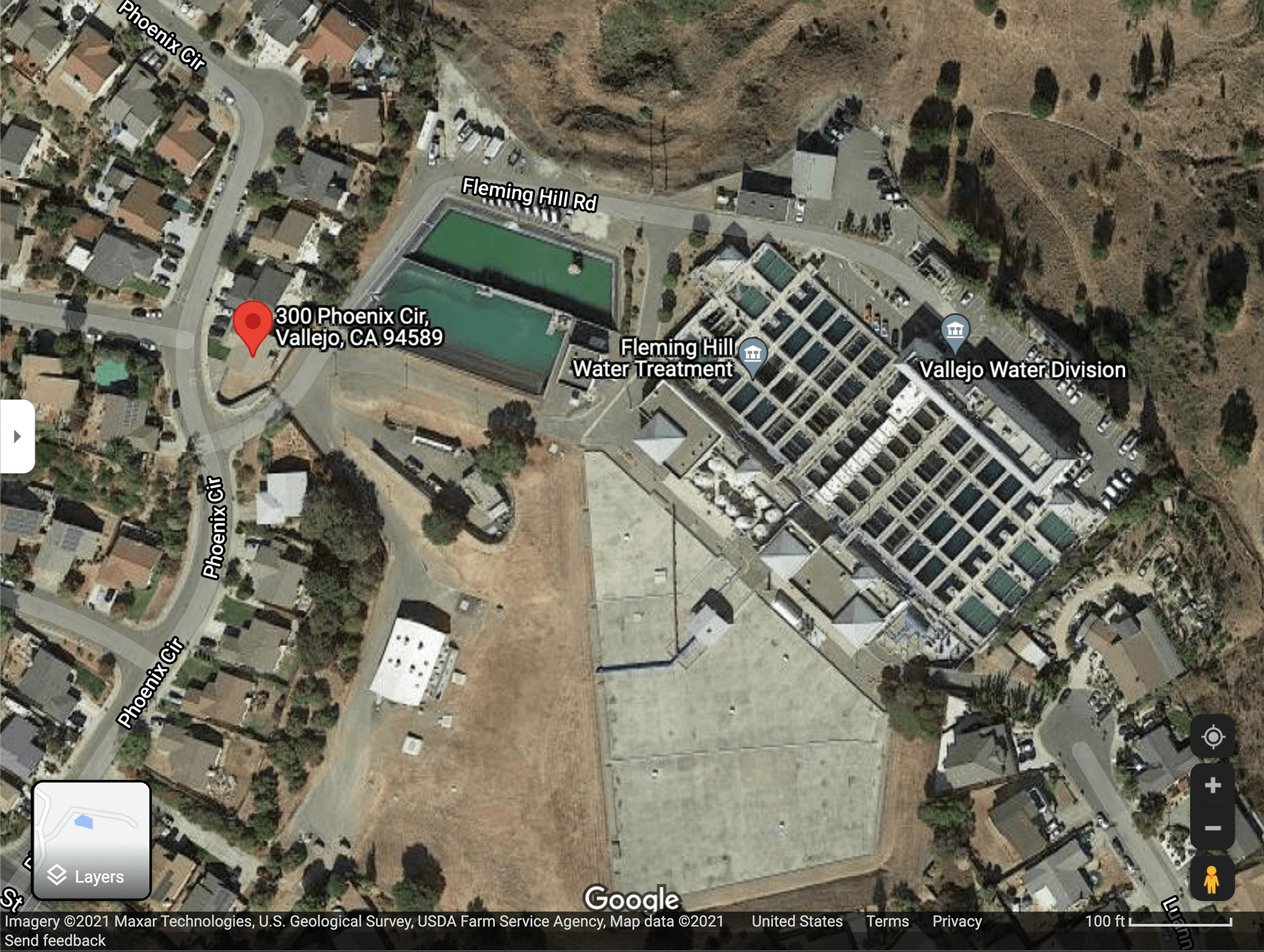 The home at 300 Phoenix Circle and the water treatment plant. Photo: Google Maps.

VALLEJO - The Vallejo City Council Tuesday night unanimously approved the first step to buy a house that staff says would serve as a “buffer” between the residential neighborhood and the city’s main water treatment plant.

Citing a need to protect the Fleming Hill Water Treatment Plant from the threat of terrorism, city staff is recommending that the council approve the purchase of the property at 300 Phoenix Circle for $710,000.

To do so, the council is required to amend the city’s budget, which requires two separate votes. The second vote is scheduled for Tuesday, Nov. 16.

“A city government with finances as delicate as ours should not be in the business of acquiring residential properties, and it can’t be a coincidence that we have a water director, [promoted to interim] city manager and then all of a sudden we have the water department purchasing residential housing,” Swift said. “What is going to be done with the house? Are they going to run city operations out of a home in a residential neighborhood?

Swift also asked about the zoning for the property, which includes an 1,800-square-foot, 4-bed, 2-bath home and 500-square-foot in-law unit. She also asked for an example of a terrorist attack against the plant.

City Attorney Veronica Nebb reiterated that the possible purchase of the property is meant to provide a “buffer” between the two properties.

“Nobody is alleging that there is a conspiracy or any terrorist threats associated with the water department,” Nebb said in response to Swift.

Nebb said that any future use of the property would go before a full public hearing.

In a rare move, the council declined to re-appoint a commission incumbent, instead opting to send a new person to represent the city on the Solano Commission for Women and Girls.

Sofia Cruz, a recent UC Berkeley graduate, will join the 17-person commission designed to increase awareness of women's issues. Elease Cheek, who helped create the commission three years ago, had been seeking re-appointment. Cheek also serves as a trustee on the Solano County Board of Education

Calling it a difficult decision and praising Cheek’s time on the commission, Councilmember Mina Loera-Diaz, District 3, said she would be voting for Cruz.

“I think that there comes a time that we have to allow our youth to step up and be able to participate,” Loera-Diaz said.

Meanwhile, Councilmember Katy Miessner, At Large, disagreed stating that Cheek had only spent three years on the commission.

“I don’t think her work is done,” Miessner said of Cheek.

Other councilmembers said it was a difficult choice and thanked both for applying.

Other additional appointments include Phillip Wilson to the Human Relations Commission via a 6-1 vote with Councilmember Hakeem Brown, At Large, providing the lone ‘No’ vote. Wilson’s term will expire on June 30, 2022.

Wayne Goodman was appointed to the McCune Collection Commission with his term expiring on June 30, 2023; Tanya Hall will join the Architectural Heritage & Landmarks Commission with her term ending Dec. 31, 2025; while Marcus Griswold will serve as a member on the Participatory Budgeting Steering Committee and Tehraleigh Martin will be an alternate member. Both terms end on June 30, 203.