John Fox, Glenn Amboy and Carlos Flores were all sworn into office.
Share this news on: 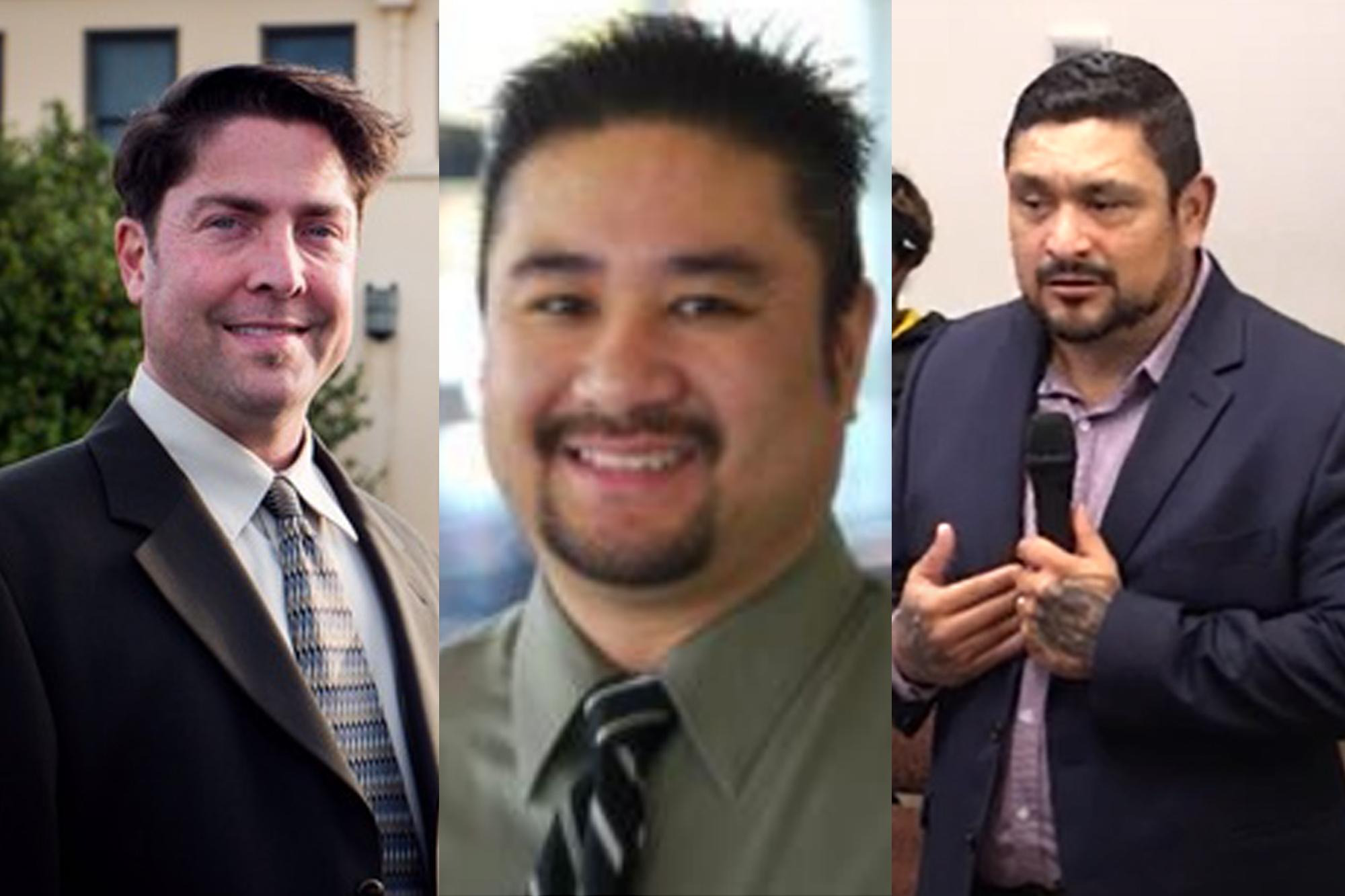 VALLEJO – There were smiles aplenty during the Dec. 14 Vallejo school board meeting as three trustees were sworn into office.

John Fox, first elected to the school board in 2018, was sworn in for a second term after defeating fellow incumbent Tony Gross to represent Trustee Area 5: Southeast Vallejo.

Glenn Amboy and Carlos Flores were also sworn in as the newest members of the five-person board.

Amboy was automatically appointed to the position when he was the only person to run to represent Trustee Area 3, which encompasses most of East Vallejo, including the Hiddenbrooke development. He replaced Trustee Tony Ubalde, who decided not to seek another term.

Flores represents Trustee Area 1, which spans most of West Vallejo and Mare Island. The area also includes South Vallejo west of Interstate 80. He was appointed to the seat in later October after no one registered to run in November’s election.

“Thank you to everyone who has been so welcoming to me,” Flores said, adding that upon learning about recent board history he couldn’t believe they had issues with each other.

“I just can’t imagine that is what it was like, so I’m really humbled and honored to be a part of this board,” he added. “We are working for the same purpose: how do we improve our kids' lives here in Vallejo.”

Amboy said that the administration and board can work together to make the Vallejo City Unified School District the best it can be.

“I just feel so humbled and blessed to be in this with all of you, it just means so much,” he added.

The board tapped Christy Gardner to be board president and  Latyna Young as board vice president. Gardner — who was appointed to the board in 2019 after the resignation of Trustee Marianne Kearney-Brown — won a full four-year term in 2020 to represent trustee area 2, which includes a portion of North Vallejo.

It wasn’t all smiles during the meeting as trustees got their first look at the district’s first interim report on the current budget and future multi-year projects.

While the district expects to meet its minimum budget reserves for the current and two subsequent years, the district said it will need to address the amount of deficit spending and begin budget reductions beginning the 2023-24 school year.

The school district started the fiscal year with a $50 million balance, but officials anticipate that the district will deficit spend by $17 million with the end funding balance estimated to be $33 million.

The district estimated about $247 million in revenues and $261 million in expenses with an additional $2.4 million in added expenses.

“We have pretty significant declining enrollment,” said Spalding. “As that has been a pattern for us, we have had to make a lot of reductions over the years, previous years we’ve done school closures.”

The district’s average daily attendance (ADA) is currently at 8,400, but the district’s funded ADA is based on the 3-year average of 9,913, district officials said. School districts receive funding on the number of enrolled students.

The loss of students has been an issue for the school district, which saw its enrollment drop over 43% between 2000 and 2019, according to a report by EdSource. That report cited district spokeswoman Celina Baguiao as saying the district has already made $29 million in budget cuts, including closing or consolidating six campuses since 2017.

The district still owes about $9 million of a $60 million bailout it received from the state in 2004 when the district became insolvent because officials at the time underestimated salary figures, inflated enrollment numbers, and approved union contracts the district couldn’t afford.

“We will eventually leave receivership because we will pay our loan in a few years,” Spalding said.

Melvin Iizuka, a special trustee overseeing the district’s financial condition, said the budget “looks very positive,” but he acknowledged that more work needs to be done.

The district is required to have the special trustee until the state loan is paid back.