Nimitz Group LLC will now own more than 800 acres of land on Mare Island.
Share this news on: 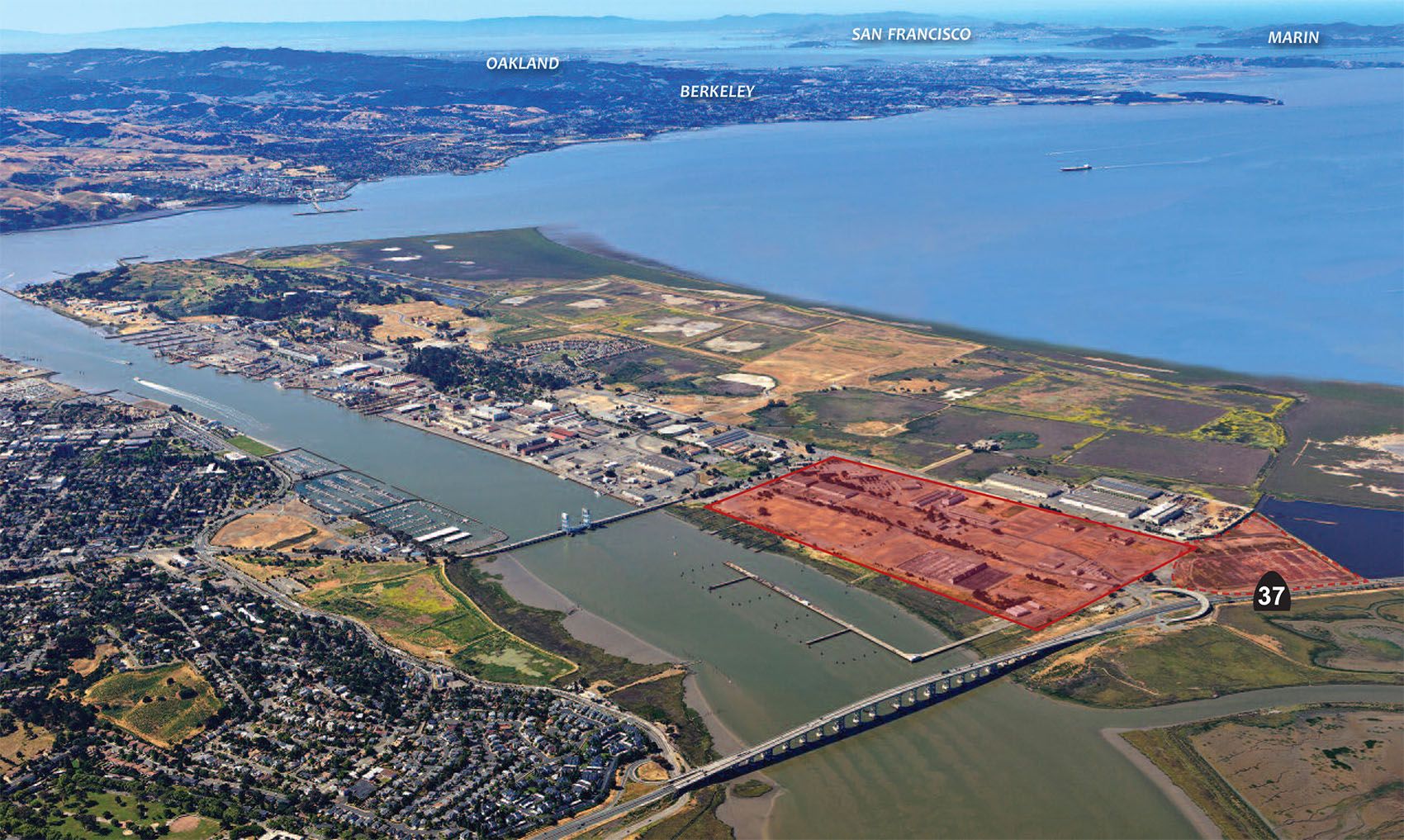 The site of a land deal to sell 157 city-owned acres to the Nimitz Group, shaded red. Photo: City of Vallejo.

VALLEJO – A badly divided Vallejo City Council Tuesday night approved the sale of 157 acres of land on the northern part of Mare Island to a developer for only $3 million.

An audible “yes” was heard from the dias after the council voted 4-3 to approve a disposition and development agreement (DDA) transferring ownership of the land to Nimitz Group, LLC., which will now own more than 800 acres of land on Mare Island.

Mayor Robert McConnell along with councilmembers Mina Loera-Diaz, District 3, and Cristina Arriola, District 6, all voted against the agreement.

Both McConnell and Loera-Diaz said the $3 million negotiated price was too low for the property, which has remained largely undeveloped since the U.S. Navy left the area over 25 years ago. City staff said most of that money — $2.3 million — will go toward paying down a Housing and Urban Development loan.

Loera-Diaz sought to delay approval of the agreement in an attempt to give city staff more time to negotiate a better price. She likened the deal to those by former Mexican President Antonio Lopez de Santa Anna, who is seen as a traitor in that country for his role in selling off Mexican territory to the United States for cheap.

“I will not be the traitor here,” Loera-Diaz said. “I think that I need to fight for what I think and feel that Vallejo deserves. We are a city that deserves that.”

Loera-Diaz’s motion for a delay never came up for a vote, as Vice Mayor Rozzana Verder-Aliga, District 1, made an alternate motion approving the agreement, which was voted on first according to  council rules. Besides voting for her own motion, Verder-Aliga received support from at-large councilmembers Hakeem Brown, Pippin Dew, and Katy Miessner.

The proposed deal has come under increased scrutiny after it was revealed that then-City Manager Greg Nyhoff met with officials from the Nimitz Group and Tennessee-based Southern Land Group in late 2019. Nyhoff was accused by former employees of weakening a term sheet by removing certain development benchmarks.

Nimitz brought in Southern Land Company as lead land manager in February 2020. The council went on to approve a revised term sheet in December 2020.

“This proposal represents a culmination of years worth of work towards the realization of the community’s vision for the future of Mare Island and all of Vallejo,” Hayes told the council. She called it a “complex” project and “one of the biggest projects the city has ever seen.”

Under the 2019 term sheet, the city would have retained the land and leased it to Nimitz, but the city agreed to sell it under the revised terms. Hayes said the revised term sheet came following an analysis done by Southern Land.

“We had come to the realization that the amount of the investment in the island to prepare it for development was going to be so extensive that it would be more beneficial for Nimitz to own the property,” said Hayes.

Hayes said that a 2019 appraisal report projected that the land needed at least $20 million in improvements prior to development, with an additional $20 million needed in soil importation costs. She said soil importation is needed as sea waters are expected to rise due to climate change.

Hayes also touted the city’s ability to control the transfer of land by Nimitz. Through the DDA, Nimitz can transfer parcels, but any transfers of more than 20% to a single transferee will be subject to council approval. In addition, Nimitz is required to submit a new specific plan with an associated backbone infrastructure plan for the entire island within two years of closing.

If Nimitz fails to develop on the island within five years, then it is required to pay the city and Vallejo City Unified School District the difference between property taxes actually paid and the taxes the city and the district would have received if Nimitz development resulted in an increase in assessed valuation of $26 million. This could net the city $49,000 and the school district $62,000 annually.

The city will also have the right to repurchase North Mare Island if Nimitz fails to complete its obligations. The city would pay the $3 million and out-of-pocket hard costs not to exceed $10 million.

Kelley said transferring ownership of the land would erase about $400,000 the city pays every year for upkeep of North Mare Island.

During public comment, several councilmembers, including Loera-Diaz, were intrigued by a speaker who claimed his business had sought to buy the land for $11 million, but that offer was never explored as the council unanimously approved a seventh amendment to an exclusive negotiating agreement between Nimitz and the city.

McConnell said was troubled that the city was using a 2019 appraisal report which determined the land had a market value of $15 million. The mayor said he had spoken with brokers that have estimated the value of the Mare Island property to be between $25 and $28 million.

“That’s a real deal killer for me,” McConnell said of the $3 million price.

Brown downplayed the $11 million offer mentioned during the meeting, stating that “all money isn’t good money.” He further said that it would look bad to other Vallejo businesses if the city engaged in finding the “highest bidder” after already negotiating with a business.

Brown, along with Verder-Aliga, Miessner and Dew, expressed optimism with the land deal.

“I’m really praying that while I’m on council, I hear a jackhammer. I’m praying, man. Just one,” Brown said. “I hate going to other cities, I go to Concord, Fairfield, I hear jackhammers everywhere.”

“I’m ready. We found a new partner,” Miessner said. “I think it’s the mix-use that we need and I’m very excited.”

More than a dozen public speakers addressed the council with many decrying the $3 million purchase price.

Reading from a letter he wrote to the council, Zayas said, “Nimitz’s negative [North Mare Island] value assessment has the primary purpose of justifying getting the land for free, with no economic benefit to Vallejo.”

Zayas, who sought to purchase the land to build a Sustainable Buildings Industry Hub, said Lennar, which bought most of Mare Island from the city after the former naval base closed,  “submitted a negative valuation for the 650 acres they were given for $1.”

“I estimate Lennar made over $1 billion from their $1 land giveaway, with little investment on their part, while Vallejo went bankrupt,” he added.

During the time between the execution of the Nimitz agreement and the approval of a new Mare Island specific plan, Nimitz has agreed to prohibit several uses on North Mare Island including dumps, heavy recycling facilities, liquified natural gas facilities, cement plants, cannabis cultivation, and heavy industrial uses.

Miessner and Loera-Diaz supported adding casinos to the list of prohibited uses.

Brown disagreed, stating that he didn’t wish to see the council’s personal morals affect future possible council decisions. He pointed to former Mayor Osby Davis, who pushed to prohibit cannabis dispensaries in town after citizens had voted to approve Measure C in 2012, which is a tax on cannabis products.

“I wish we had the biggest casino in the world here, only because we need the money, quite frankly,” Brown added.

Part of the development agreement requires Nimitz to build the Connolly Corridor Development, a six-block walkable district with retail, hotel, housing, and open space within the central part of Mare Island.

Hayes said the plans include 29,000 square feet of office space, up to 373 multi-family housing units, a 200-room hotel, 46,000 square feet of ancillary space, which includes retail, food and beverage kiosks, event space, and 194,000 square feet of open space. The proposed development, valued at $300 million, would include the coal sheds and span from the Mare Island Strait to Azuar Drive.

“Basically, it’s a very large-scale project that is required to move forward within 60 months,” Hayes said. “We heard loud and clear from the council and the community: they want to see something now.”

“This is a once-in-a-generation opportunity” D’Alesandro said,  “and what we do now, and in the near future, will set Mare Island on an ambitious trajectory toward economic prosperity, enhanced cultural vitality, and more robust sustainability,.”