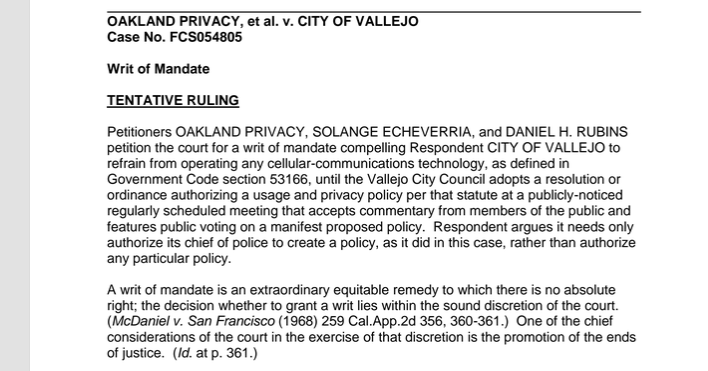 A Solano County judge issued a tentative ruling on Thursday in support of a lawsuit blocking the city of Vallejo’s use of a controversial piece of technology.

However, a final ruling is expected within the next 30 days.

In his tentative ruling, Judge E. Bradley Nelson said the city breached its duty when the Vallejo City Council agreed to buy a cellular-site simulator, also known as a stingray, before passing a resolution or ordinance outlining the city’s privacy policy on usage of the device.

Oakland Privacy, a citizen group, filed a lawsuit in June asking the court to block the city’s purchase and use of the equipment until the city council adopts the privacy policy – as required by state law.

Lee wasn’t immediately available to answer follow-up questions on if the city already purchased the equipment and, if so, has the equipment been used in the city of Vallejo.

All cell phones actively ping a cell tower allowing the user to call, text and use data. A stingray masquerades as a tower, causing all nearby cell phones to ping the device instead. Law enforcement is then able to obtain each phone’s unique IMSI number, which can be used to track the location of the phone.

“Decisions to acquire and deploy invasive technology should happen in broad daylight. Cell site simulators (or stingrays) introduce profound challenges to privacy, public safety and human rights and have been the object of congressional investigations, complaints to the Federal Communications Commission and Department of Justice rulemakings,” according to a statement posted to the group’s website. “Non-disclosure statements manufacturers ask buyers to sign greatly limit public information about how the devices work and how they are used.

The city council unanimously approved a $766,018 contract with KeyW Corporation for the cellular site simulator and the purchase of a vehicle during its March 24 meeting. Those cost also included installation of the equipment inside the new vehicle.

According to the same March report, staff said the police department and city attorney’s office had “prepared and approved” a police department policy “which details the nature of the equipment, authorized users, privacy issues, approved uses of the system, mandated training for authorized users, and interagency cooperation for the usage of the system.”

Officials said following the purchase of the equipment the new police department policy would be issued. There was no mention of the council adopting a resolution or ordinance outlining the city’s privacy policy on usage of the device.

Following the March council meeting, both Oakland Privacy and Electronic Frontier Foundation sent matching letters demanding the purchase of the equipment be halted, arguing the city had not complied with state law.

The city denied those claims.

“The City disagrees with their position that the adoption of the City’s usage policy violates the law,” Lee told the Times-Herald in June. “In fact, it fully complies with state law.”

According to the group, the city’s privacy and use policy will be placed back on the City Council agenda for its Oct. 27 meeting.

“This meeting will provide an opportunity for Vallejo residents to read, review and comment upon the policy prior to adoption by the City,” group said in its post.

During the same March meeting, the city also signed a non-disclosure agreement (NDA) with KeyW Corporation. The NDA restricts release of information about the technical capabilities of the device and requires the corporation to be notified when the city fulfills a public records request about the device, the group previously said.

City officials have said the purchase of the equipment has come from three different funding sources: $400,000 from the city’s general fund, $204,000 from various law enforcement grants, and $162,000 from asset forfeiture.