Brian Travis headed campus security for three and a half years before he retired from the sheriff’s office in 2019.
Share this news on: 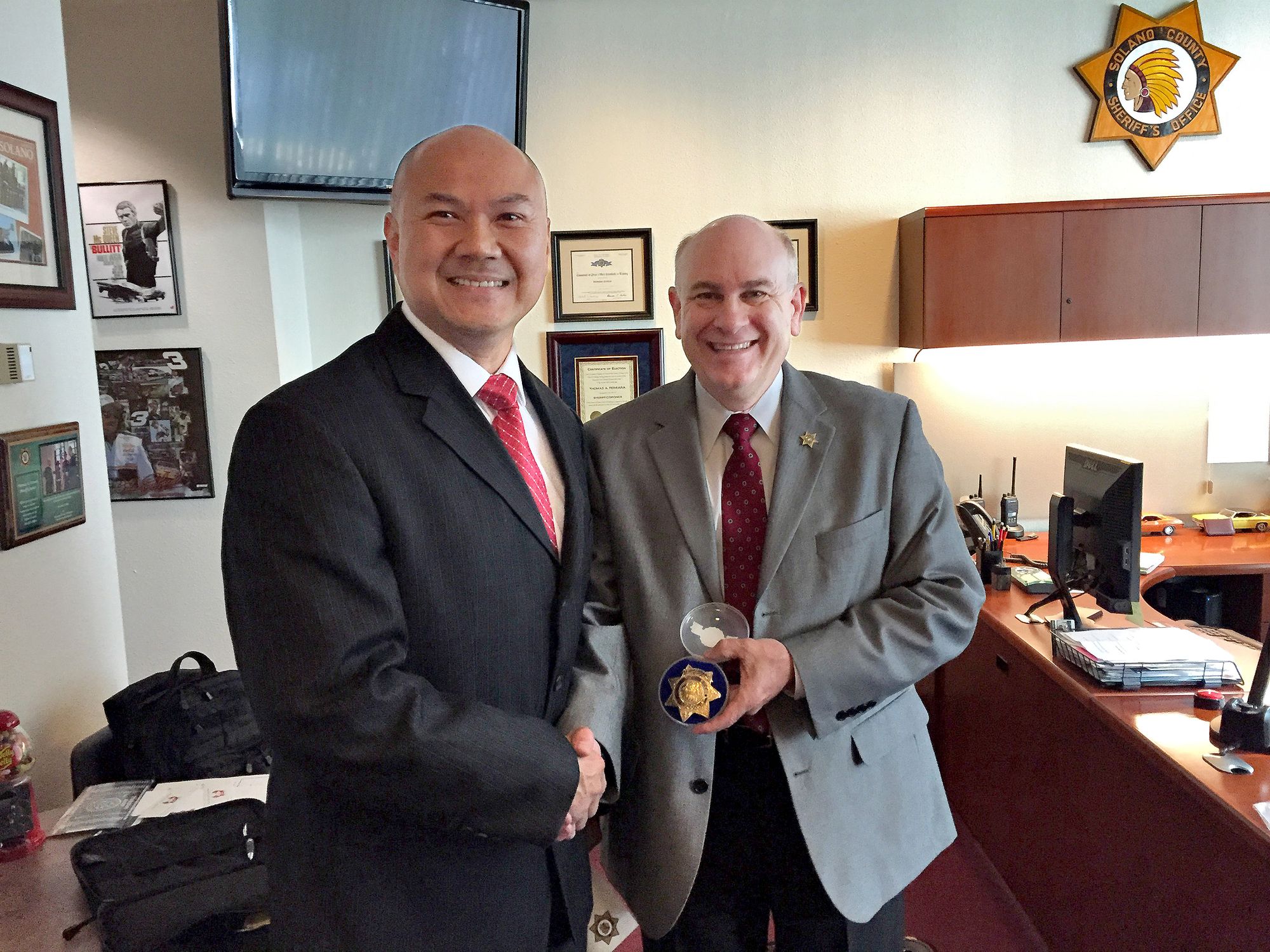 Brian Travis with Sheriff Tom Ferrara when he was promoted to lieutenant in 2015. Photo: Solano County Sheriff's Office.

FAIRFIELD – A former Solano County Sheriff’s lieutenant has been tapped to lead a new police department for the Solano Community College District that he helped design.

Former sheriff’s Lt. Brian Travis was officially hired by the college’s governing board in a unanimous vote last week. His company, Forward Solutions, collected feedback last year from faculty, students and staff on how to manage policing at the school after Sheriff Tom Ferrara withdrew from a contract with the college.

In an emailed statement to the Vallejo Sun, Travis said that after he helped the college design the new force, he decided to apply for the chief’s position himself. It marks a return to the campus for Travis, who headed campus security for three and a half years before he retired from the sheriff’s office in 2019.

“I really loved working with students, faculty and staff during my time here from 2016 to 2019, so I submitted my application for consideration,” Travis said.

The college is planning to create a hybrid department with some sworn law enforcement officers who will act as supervisors along with unarmed security guards.

The college previously had its own police force and considered staffing it with unarmed guards in 2012, which then-police Chief Steven Dawson strongly opposed. But Dawson was placed on leave later that year and then fired. As the department struggled with recruiting, including for the chief’s position, Ferrara brokered a contract for the sheriff’s office to take over policing services for $980,000 per year. That cost was reduced to $928,948 in 2017.

But Ferrara withdrew from that contract last year after a confrontation over his deputies’ displays of support for the Three Percenter anti-government militia group. Ferrara disputed that the deputies supported the group and said they sought to show support of the 2nd Amendment. The deputies either took the posts down or made them private after they were publicized.

With the contract slated to end, the college contracted Travis to collect feedback from the college community on how to proceed with campus security. He found that most people supported a hybrid system with a mix of sworn officers and unarmed guards.

In addition to his law enforcement experience, Travis is a military veteran.He joined the U.S. Army Reserve in 1993, was promoted to lieutenant in 2001, and was deployed to Bosnia and Iraq before retiring as a major in 2019,  according to his LinkedIn profile. In 1997, Travis joined the South San Francisco Police Department and worked there for 9 years before he was hired by the sheriff’s office in 2006, that profile states.

In returning to the college, Travis said that he plans to emphasize equity, diversity, inclusion and transparency, which he believes will lead to trust in the community and sustainability for the agency. He also said that he plans to take action to minimize bias and address systemic inequities, which if unaddressed would hinder the effectiveness of the department.

“Working in a higher education environment where shared governance is the norm can be challenging for many, especially those in law enforcement who are more familiar with an organizational structure with clearly defined roles and responsibilities,” Travis said. “I truly believe in shared governance and practiced it every day during my tenure at SCCD and I fully understood the role of constituent groups.”

To that end, Travis said he plans to create outreach and integration programs to communicate with students, faculty and staff and foster an environment where officers will “truly be a part of the community instead of being regarded as relevant only in emergencies.”

For the outreach program, Travis said that he wants officers to explain to the campus community what to expect from the agency. For the integration program, he said the department will partner with the criminal justice education department. “Campus safety officers have real-life expertise in the psychology of human interactions, report writing, the law and conflict de-escalation,” Travis said.

Travis’s first day in the chief’s position will be Feb. 1. At last week’s meeting, the college governing board also approved job postings for sworn public safety sergeants and a non-sworn public safety supervisor. A committee with representatives of faculty, staff and students is evaluating the applications.

The contract with the sheriff’s office had been set to expire at the end of last year, but the governing board also voted last week to extend that contract through the end of June. College Vice President of Finance and Administration Susan Wheet said that the district’s goal is to have the new department established by the end of March and the school can terminate the sheriff’s contract with 30 days’ notice.

Two trustees voted against the extension, questioning the necessity of the contract. With the spread of the COVID-19 omicron variant, all college classes are being conducted online for the first five weeks of the spring semester, which started on Jan. 18.

“We are hopeful that our students will be returning to in person learning soon,” Travis said. “I would like our college campus community to know that DPS employees will be here and ready to serve and protect them with compassion and care.”

Correction: This article has been updated to correct Susan Wheet's title.