Fairfield police to release video of officer shooting in Vallejo

The Vallejo Sun filed a petition in Solano County Superior Court to compel release of the footage.
Share this news on: 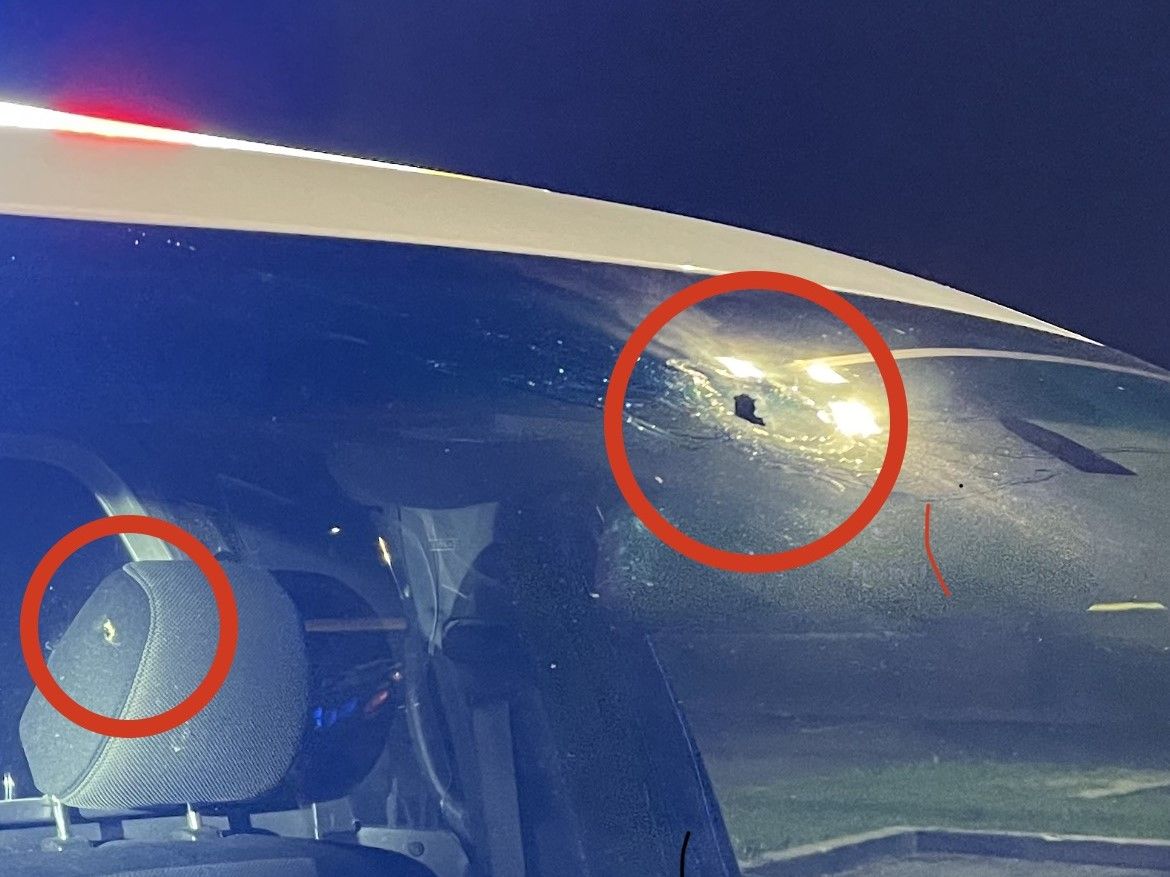 Fairfield police said that a fleeing suspect shot at officers and one bullet penetrated a patrol car's windshield and struck the driver’s side headrest. Photo: Fairfield Police Department.

FAIRFIELD – The city of Fairfield is set to release video on Wednesday of Fairfield police officers pursuing a man into Vallejo and shooting him in June, under the terms of a settlement with the Vallejo Sun.

The city had previously refused to release the footage, citing the criminal prosecution of Patrick Hall, the man whom the officers shot and wounded. In September, the Vallejo Sun filed a petition in Solano County Superior Court to compel release of the footage, arguing that it must be released under state law. Last week, the Fairfield City Council approved a settlement with the Sun, which requires the city to release the footage by the end of the day on Wednesday.

The pursuit and shooting happened June 26 after Fairfield police attempted to pull Hall over in the 3000 block of N. Texas St. at about 10 p.m., police said in a statement after the shooting.

Police alleged that during the pursuit, Hall shot at officers, with several of the bullets hitting the police vehicles. Police said that one bullet that Hall fired penetrated a patrol car's windshield and struck the driver’s side headrest, narrowly missing the officer.

Officers chased Hall to North Vallejo, where they deployed a spike strip that stopped Hall. Police alleged that Hall again shot at the officers, who returned fire and struck Hall. He was arrested, taken to a hospital for treatment and survived the gunshot wound.

Prosecutors charged Hall with attempted murder and other crimes days after the shooting. His criminal case is pending.

Two days after the shooting, the Vallejo Sun submitted a request for any video of the incident under the California Public Records Act and AB 748, which requires the release of video of any police shooting within 45 days of the incident, except in certain narrowly defined circumstances.

The department did not release the video in 45 days. Responding to follow-up emails from the Sun weeks after the deadline, the city asserted that it was withholding the release of the video at the request of the Solano County District Attorney’s Office, arguing in an email that releasing the video would "reasonably be expected to interfere with a criminal enforcement proceeding.”

The city estimated it would release the records on Feb. 24, 2023, unless there was “clear and convincing evidence that the interest in preventing prejudice to the active and ongoing criminal investigation or proceeding outweighs the public interest in prompt disclosure of the records.”

The Sun’s petition, filed on Sept. 16, argued that under AB 748 — which was passed in 2018 to improve police transparency — the city must provide a more specific reason to continue withholding the video.

The Fairfield City Council approved a settlement with the Sun on Nov. 1, which requires the city to release all video of the shooting by Wednesday and pay this publication's attorney’s fees.

The Sun was represented by Berkeley attorney Sam Ferguson. Ferguson previously represented the Sun in an action against the city of Vallejo for withholding a review officer’s findings regarding the shooting of Sean Monterrosa. He also represented Vallejo Sun reporters Scott Morris and Brian Krans in a class action lawsuit against the city of Oakland, which led to reforms of the Oakland Police Department’s public records practices.

Hall was the second person shot in Vallejo by an outside law enforcement agency in June. A Solano County sheriff’s deputy shot and killed Jason Thompson on June 19 after he approached deputies while holding saw blades. In that case, the DA’s office also delayed the release of video past the 45-day deadline, saying it had not interviewed all witnesses. The sheriff’s office released the video a month after the deadline on Sept. 2.