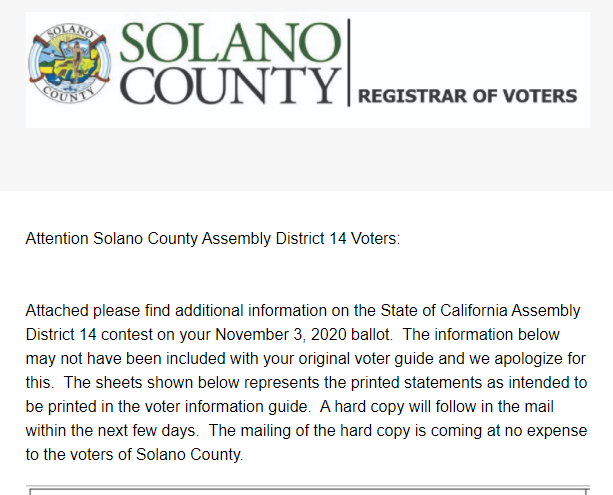 October hasn’t been kind to the Solano County Registrar of Voters as the department announced that for the second time this month candidate information was omitted from the voter guide.

Election officials discovered that about 70,600 guides were impacted when candidate statements from either Tim Grayson, or Janell Elizabeth Proctor, were omitted from the guides, Solano County announced on Wednesday.

Grayson, who represents the California Assembly District 14 which includes the cities of Vallejo and Benicia in Solano County, is being challenged by Proctor.

“We discovered the omission Tuesday mid-day and immediately got to work informing voters of the issue,” said Tim Flanagan, Solano County chief information officer, in a county press release. “It’s imperative that voters know that the information on the official ballot is correct. If voters believe there is incorrect information in their Voter Guides or have an issue with their ballots, we ask them to contact us right away.”

Flanagan said that about 33,500 were contacted via email Tuesday night informing them of the error. He further said that the ROV will be mailing out corrected copies soon.

“The correction will be mailed at no cost to the county,” Flanagan said. “While the County regrets this inconvenience, it is important to note, there are 195 different variations of the voter guides in Solano County for the November 3, 2020 election.”

More than 2,500 voter guides were impacted, officials said. Like with the other error, voters were informed via email and the ROV confirmed it would be mailing out corrected copies.