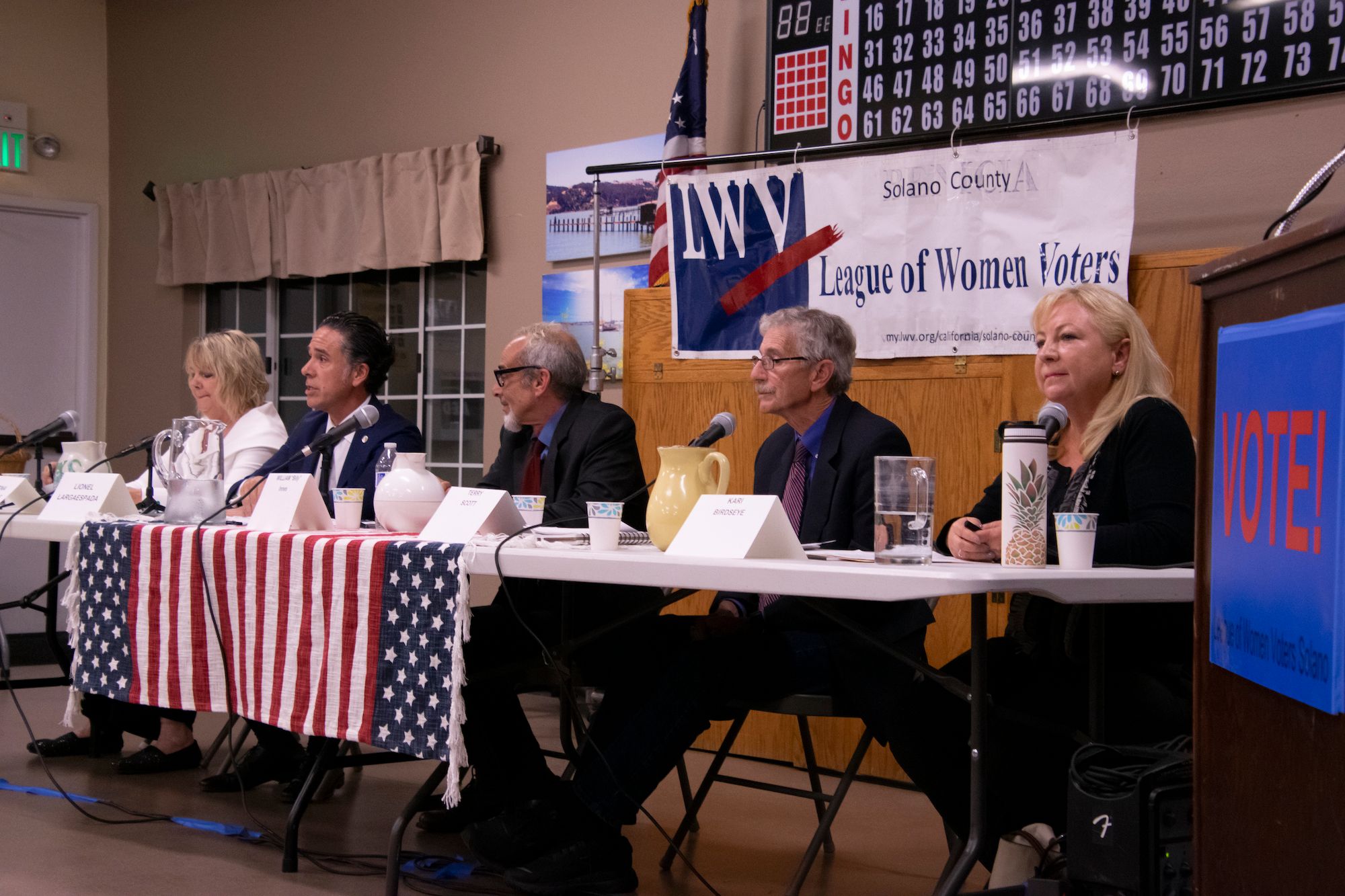 Challengers Terry Scott and Kari Birdseye took the lead early in the evening, with Scott and Birdseye in first and second place. But incumbents Lionel Largaespada and Christina Strawbridge gained in Election Day results and Largaespada surged into second place late Tuesday. As more vote by mail ballots were counted, Birdseye again retook second place on Wednesday and expanded her lead in results released Thursday.

According to released by the Solano County Registrar of Voters on Thursday, Scott led with 25% of the vote, followed by  Birdseye with 24%, Largaespada with 23%, and Strawbridge with 21%.  Retired teacher William Innes — who said during a candidate forum he intended to vote for Scott and Birdseye — had 7% of the vote. The county said it will release further results next week.

Benicia’s council members are elected by the entire city and the top two vote-getters will be on the council for the next four years.

The race was hotly contested, particularly because of the influence of oil manufacturer Valero, the city’s largest employer that spent tens of thousands of dollars campaigning for the incumbents in the last days leading up to Election Day.

Valero previously campaigned for Largaespada and Strawbridge and against Birdseye in 2018. Birdseye narrowly lost that race. When Strawbridge ran for mayor two years later, Valero again supported her, but she lost badly to now-Mayor Steve Young.

This year, it appeared that Valero might sit out the race following a scandal when it was revealed that the refinery had allowed toxic gas to be released from a hydrogen vent for years. The Bay Area Air Quality Management District obtained an abatement order for Valero, but what penalties the refinery may face have yet to be determined.

Valero’s political meddling was a major issue at a candidates forum in October, where Scott and Birdseye called for greater oversight of the refinery in the wake of the emissions scandal.

Largaespada and Strawbridge have both denounced Valero’s attempts to influence the city’s politics. By law, their campaigns cannot coordinate with the activities of Valero’s PAC.

Measure R – which seeks to raise Benicia’s sales tax – also had an early lead in Tuesday night’s returns but fell behind in Election Day results. If passed, the measure would raise Bencia’s sales tax by three-quarters of a cent, to 9.125%.

The Benicia City Council voted 4-0 to place the tax measure on the ballot during its July 5 meeting. City manager Erik Upson argued the city needed the extra revenue as its infrastructure was aging and it lacked the funds to replace, repair or maintain it. Largaespada opposed it.

The council had originally considered making the ballot measure for a special tax that would only be for road repair, which would have required a two-thirds majority to pass. Measure R is a general tax that can be spent for any purpose and requires only a simple majority of voters.

Benicia also appeared to have voted to extend its Urban Growth Boundary — a historical decision that prevents the city from expanding into the hills north of the city. It’s a renewal of a 20-year stay that voters originally set in 2003.

It only needs a simple majority (50% and one more vote) to pass.

Editor's note: This story has been updated with the latest election results on Wednesday and Thursday.