It has more police shootings per capita than any other area police department.
Share this news on: 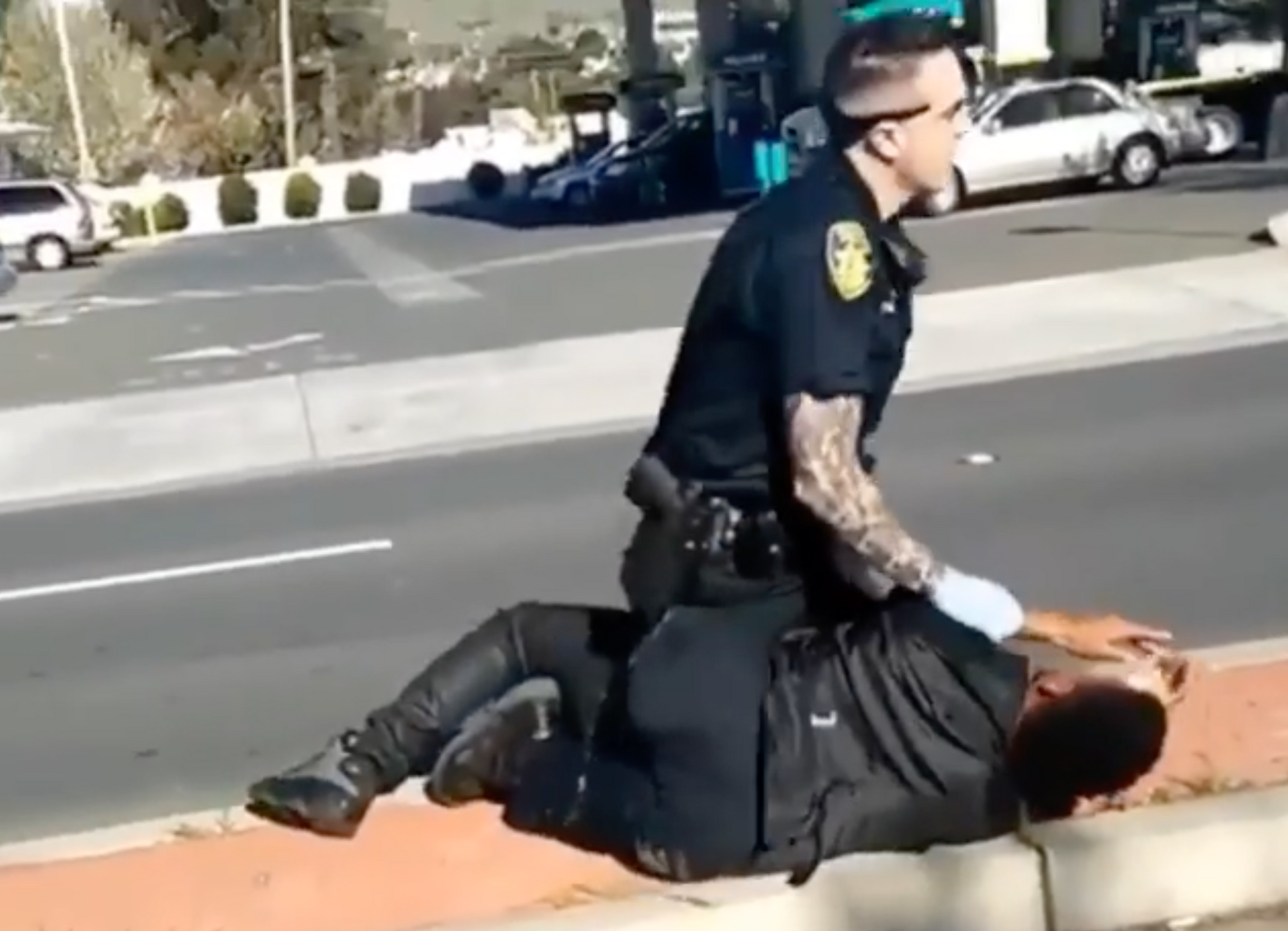 Officer Spencer Muniz-Bottomley holding down a man and hitting him in video taken by a bystander.

VALLEJO – A video surfaced on Facebook Saturday showing a Vallejo police officer chasing down a suspect and striking him repeatedly with what appears to be his flashlight. The officer briefly reaches for his gun but then resumes hitting the man as he screams “I am God” and some in the crowd shout “police brutality!” The officer later pulls his gun briefly on someone in the crowd.

Vallejo police Lt. Jeff Bassett provided a statement to a local TV station that said, “Just like anyone else officers are innocent until proven guilty. Violence is always ugly but police officers are exposed to violent situations everyday and they are required to over come that violence not just match it. We will investigate this matter and will take the appropriate action if any policy or law has been broken.”

It happened just outside the Valero gas station at 1610 Fairgrounds Drive, exactly when isn’t clear. Bassett did not immediately respond to a request for more information about the circumstances surrounding the video.

It has already been widely reported that the Vallejo Police Department is one of the most violent in the Bay Area. It has more police shootings per capita than any other area police department. Over the last several months, I have compiled detailed records of 230 police shooting incidents in the nine-county Bay Area dating back to 2013 through police and court records, media accounts and California Public Records Act requests. In the city of 118,000 residents over the last four years, there have been a dozen incidents of Vallejo police officers firing their weapons, killing five suspects and wounding four.

Four years ago, Vallejo was also facing controversy over violence after one officer, Sean Kenney, fatally shot three suspects in a span of a few months. The department’s rate of shootings was highest in the Bay Area then as well with six people killed by police in a single year. Since then, Kenney was promoted to detective and tasked with investigating homicides, including a fatal police shooting on March 21, 2015, when a rookie officer killed an apparently suicidal man.

Another officer currently on the force, Josh Coleman, has been involved with three shootings in the last four years: last November, when a man allegedly pointed an assault rifle at two officers in a Starbucks; in July 2014, after he crashed his patrol car while trying to stop a fleeing suspect; and in August 2013, when he chased a man to the back of the Coconut Grove Bar while looking for a robbery suspect.

The department has already had a controversial fatal police shooting this year. Angel Ramos, 21, was killed in the 1700 block of Sacramento Street on Jan. 23 at 12:38 a.m. after police said they arrived at a party where there were reports of several people fighting with weapons. Ramos reportedly had a knife and was fighting with another person who was on their back. Ramos’s family disputes that account, saying he was unarmed and trying to defend his brother. They have already held several protests over the shooting.

Here are the other 11 police shootings in Vallejo over the last four years, with primary source material linked when available: