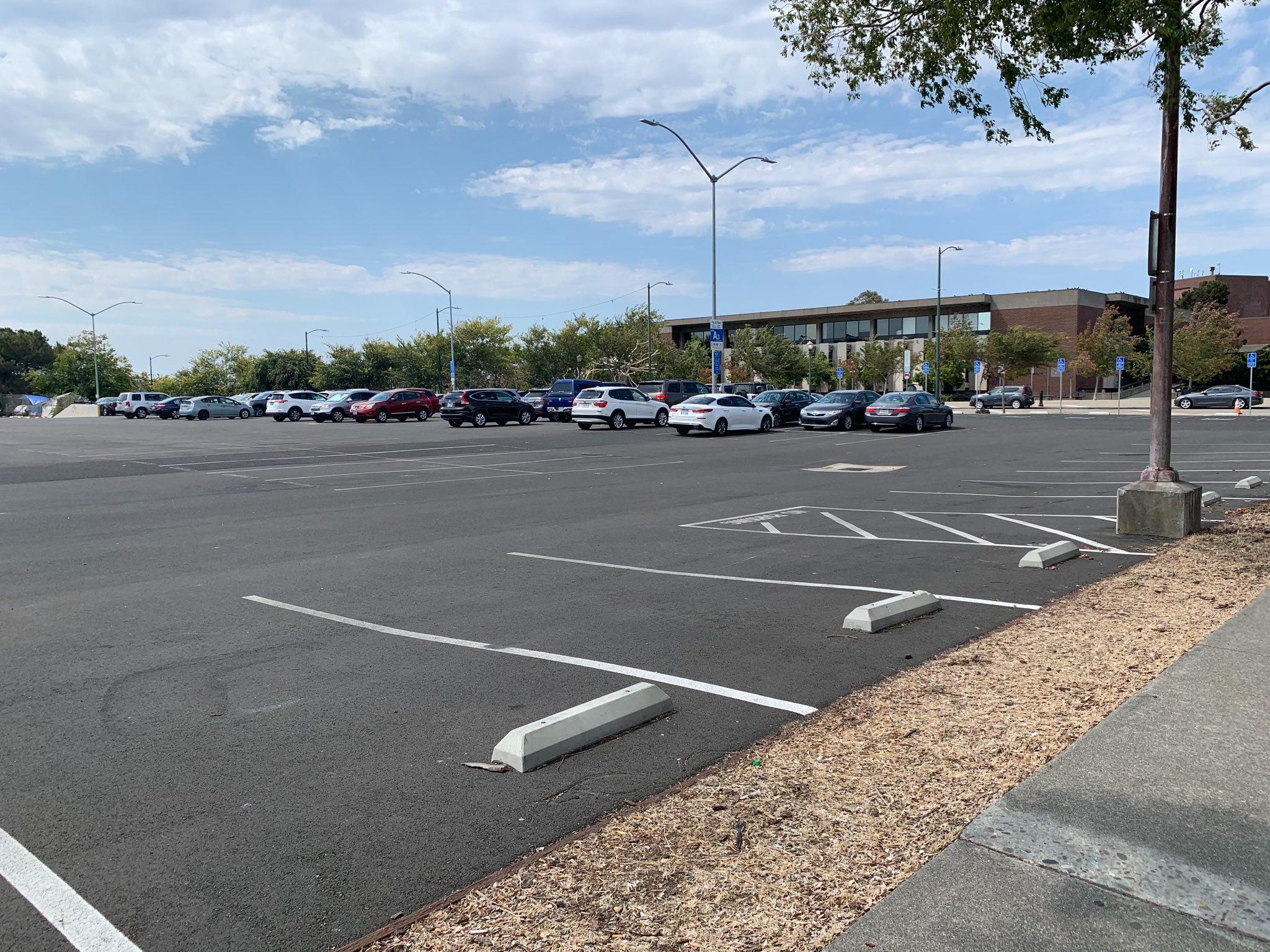 A parking lot near the John F. Kennedy public library is the site of a planned mixed use development on city owned land. Photo: John Glidden.

VALLEJO – The Vallejo City Council unanimously declared three parcels of land as surplus on Tuesday, the first step to selling or leasing the properties. But the move raised questions about the future of a planned development at the site of the former main post office.

The three sites include a parking lot on Broadway Street near the intersection with Tennessee Street, 4.2 acres on Columbus Parkway, and a parking lot at 485 Santa Clara St. near the John F. Kennedy Public Library that once was home to the main post office.

Under the state Surplus Land Act, municipalities that declare surplus lands must first make them available to potential low-income housing developers. The declaration triggers a 60-day response period for affordable housing developers to submit proposals; if the city receives no responses, it can entertain other offers.

Assistant City Manager Gillian Hayes said that when the council entered into an exclusive negotiating agreement (ENA) for  a market rate mixed-use development on the site of the old post office in 2020, it did not solicit affordable housing projects first. Therefore, under the Surplus Lands Act, affordable housing developers now have 60 days to submit their own proposal.

Holliday Development previously proposed to build 150 market-rate multi-family apartment units on the site, with ground floor retail spaces along Georgia Street. Both the housing and retail would wrap around a new parking garage.

“We are still looking at moving forward with an expansion of that parking garage and (with) all of our partners in funding on that site but we must comply, before we move forward with any project on that site, with the Surplus Land Act,” Hayes said.

“It is a limited site,” Hayes said about the post office site.  “The type of development on the shape of that two acres more than likely is going to have to be a modular type unit because of the parking garage on that site so it will limit the responses we get; because not everyone will be interested in that size of a location with that type of development options.”

“The topography of the site really limits the use [by] the city for that property,” Hayes said. “It is a hillsite area.”

Mayor Robert McConnell said that he wants more than just a simple pay increase for council members, suggesting during Tuesday’s meeting that he’d like to see each member receive a living wage while also having additional administrative support.

McConnell made his comments after Vice Mayor Rozzana Verder-Aliga requested that the council have a future discussion about increasing the council stipend. The council obliged, tentatively scheduling the discussion for October.

All seven members earn an annual salary of $14,700, with the mayor receiving an additional $22,800 stipend, according to a 2022 city council candidate guide released by the city clerk’s office.

Verder-Aliga said it has been 15 years since the last increase to the council stipend. She previously told the Vallejo Sun that as vice mayor she spends close to 15 to 25 hours per week attending community events, responding to emails, reviewing documents and agendas, meeting with the city manager and his executive staff, returning phone calls, and attending city council, board and commission meetings.

“I think it’s about time that we have a discussion and a recommendation to increase the stipend,” Verder-Aliga told the council.

The mayor has an executive assistant who earns about $86,000 in annual salary.

The Vallejo City Council made appointments to five city commissions and boards, including naming Ann Adams to the Architectural Heritage & Landmarks Commission for a term ending on Dec. 31, 2025.

Kevin Tennyson was unanimously appointed to the Code Enforcement Appeals Board for a term to expire on Dec. 31, 2025. He was the only applicant.

The council unanimously sent incumbents Pelton Stewart, Paul Lamb, and Elissa Shanks Stewart back to the Sister City Commission for terms to end on June 30, 2026. David Muchnikoff also applied to serve on the commission.

Brown took the rare route of declining to vote for applicants despite enough seats being available.

Brown also declined to support Ruscal Cayangyang’s bid to be re-appointed to the Participatory Budgeting Steering Committee. The rest of the council supported Cayangyang while all seven named Ann Adams to the committee as well. Both terms end on June 30, 2024. There were five members and two alternate vacancies.