The impacted residents won’t be able to vote for city council until District 6 is back on the ballot in 2024.
Share this news on: 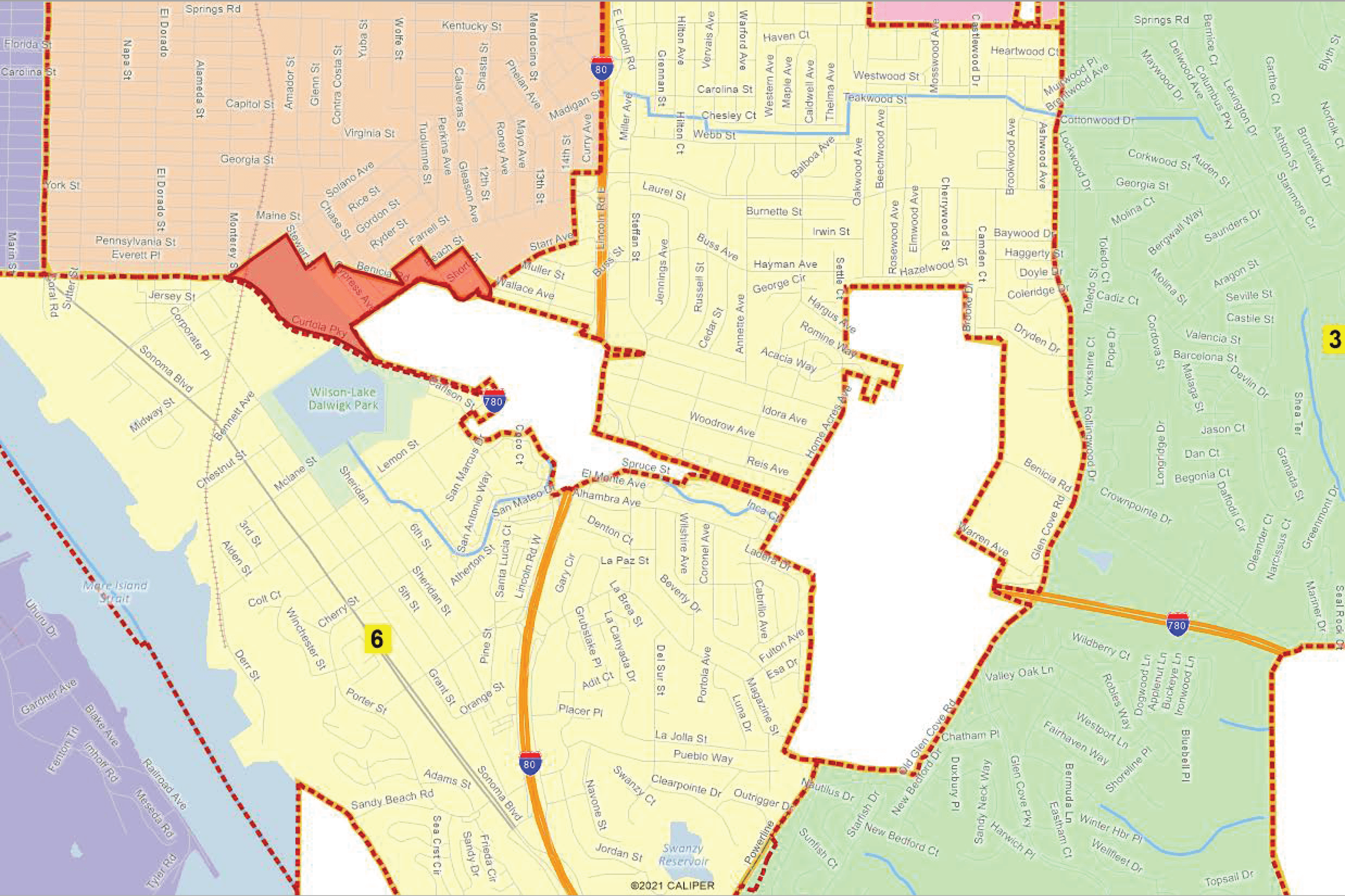 The city council is expected to adopt Map B, above, which would move the area shaded red from District 5 to District 6. Courtesy city of Vallejo.

VALLEJO – Citing “misguidance” from its hired demographer, city officials are asking the Vallejo City Council to reverse its decision from last month on a new council district boundary map.

The issue is centered on moving 293 residents from District 5 - Central Vallejo to District 6 - South Vallejo to correct a non-contiguous issue with District 6. Presented with two maps, the council expressed support for the map which would lessen the impact and only move 267 persons to District 6.

The council approved Map B during its Feb. 8 meeting. However, later in that meeting, the city’s demographer said that Map A would be the choice to lessen the impact. Now, city officials say this was a mistake and if the council wanted to move less people from District 5 to District 6, Map B was the one to adopt.

The council will be asked if it would like to reverse its prior decision and adopt Map B. The city must complete its redistricting process by April 17.

The city council is expected to approve an agreement with Advance Peace for their Peacemaker Fellowship program in an effort to reduce gun violence in the city.

“A priority of the strategy is to ensure greater support and connectivity to human, social, and economic opportunities, to young adults who are traditionally isolated from those services,” interim City Manager Mike Malone wrote in a staff report to the council.

If approved, the program will be partially funded as both Advance Peace and the city look for additional funding to fill the gap. The council will be asked to officially spend $700,000 of American Rescue Plan Act monies which were given to municipalities hurt by the COVID-19 pandemic. The council approved allocating ARPA funds to Advance Peace last September.

The three-year program will cost the city $2.5 million, with the city providing at least $1.3 million, Malone said. Both the city and Advance Peace will work together to secure state, federal and other financial services for the remaining $1.2 million.

Malone said that the program has obtained “verbal commitments” from three funding sources in the amount of $600,000., They include Kaiser Permanente, Sutter Health and The Harry and Jeanette Weinberg Foundation.

Advance Peace was first created in the city of Richmond and has been replicated in Stockton and Sacramento.

Council to appoint new members of city’s Surveillance Advisory Board

The council is expected to appoint the inaugural members to the newly created Surveillance Advisory Board, which was established last year following concerns about the lack of oversight over the purchase and use of surveillance technology by the city’s police department.

According to the city, 27 applied with 25 participating in interviews with the council this week. Each council member will have the opportunity to select a member of the board. Vice Mayor Rozzana Verder-Aliga, District 1, Councilmember Mina Loera-Diaz, District 3, and Arriola are required to appoint members who applied from their respective districts.

Mayor Robert McConnell and councilmembers Hakeem Brown, Katy Miessner, and Pippin Dew, who are all at-large members, can appoint any person who applied.

The term for each board member will run concurrently with the term of the appointing councilmember. Dew and Miessner are termed out of office in January. Brown announced that he will not be seeking re-election to the council this November. Meanwhile, McConnell and Verder-Aliga will be termed out of office in January 2025.  Arriola and Loera-Diaz, who were both elected in November 2020, are eligible to seek re-election in 2024.

The Surveillance Advisory Board will be tasked with advising the council “on best practices to protect the safety, privacy, and civil rights of Vallejo residents in connection with the purchase, borrowing, and/or use by City Departments of Surveillance Technology,” according to the city.

“In addition, the Board will conduct meetings to gather public input concerning the use of surveillance technology by the City of Vallejo and seek advice and testimony from experts in the field, allowing board members to make informed recommendations to the City Council and staff,” the city added.

Council returns to its chambers

Following two months away, the Vallejo City Council will return to its chambers on Tuesday. The council voted in early February to move all city meetings back to in-person following a surge of the COVID-19 omicron variant over the holiday season.

Last month, the council also voted to lift the city’s mask mandate, joining 11 other regional counties and the state of California which lifted mandates in February.

The public will still have an opportunity to participate in the meeting remotely, via Zoom: https://ZoomRegular.Cityofvallejo.net.