The massive fish die-off appears to be caused by an algae bloom across the Bay Area.
Share this news on: 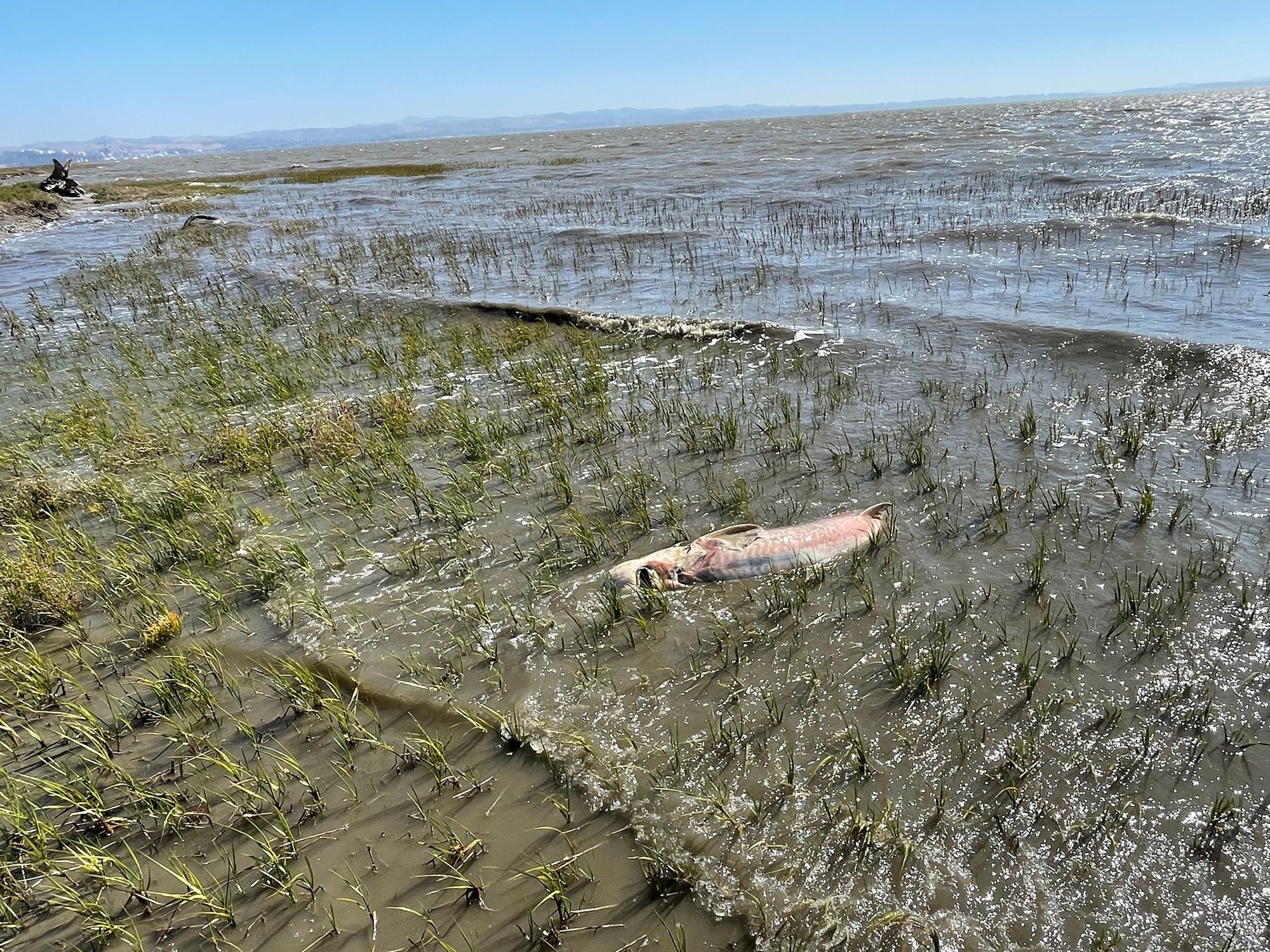 A dead sturgeon discovered on Mare Island by naturalist Damon Tighe on Tuesday, one of many affected by an algal bloom throughout the bay. Photo courtesy Damon Tighe.

VALLEJO – Nearly two-dozen dead sturgeon and striped bass were observed on the shore of Vallejo’s Mare Island on Tuesday, part of a massive fish die-off that appears to be caused by an algae bloom across the Bay Area.

Damon Tighe, a naturalist with the California Center for Natural History, said that he observed 21 dead sturgeon and two striped bass in a small section of the Mare Island shoreline on Wednesday as he chronicled the mass die-off of fish throughout the Bay. Tighe documented his observations on the website iNaturalist.

“Mare Island so far is the highest density of dead sturgeon we have documented in this algae bloom,” Tighe told the Vallejo Sun on Wednesday.

Tighe said that he was only able to document a small portion of the Mare Island shoreline before his phone battery died. He also visited during high tide, which would limit the number of dead fish he could observe.

Given the pattern he was seeing, Tighe said that he believes if the entire shoreline was documented, there would probably be more than 100 dead fish, including green sturgeon, a federally protected species.

Tighe said that he and other naturalists and scientists first noticed an increase in algal bloom in July in the Alameda area. While not all algal blooms are harmful, the species near Alameda, heterosigma akashiwo, has been known to have a lethal impact on fish species.

Exactly why it impacts fish species is sometimes unclear and could be due to the bloom producing certain toxins or reducing oxygen levels in the water.

Aundi Mevoli, a field investigator and policy advocate for the environmental group San Francisco Baykeeper, said that her organization received its first report of algal bloom in Vallejo on Aug. 22, when an observer at the marina reported seeing a combination of reddish-brown water and regularly colored seawater along with a dead silverfish. Within a few days, the water turned all brown.

Baykeeper received its first report of algal bloom this year at the Marina Village Yacht Harbor in Alameda on July 29. By the time, Mevoli said the state Department of Public Health had recognized the algal bloom and that it was spreading to the Oakland Estuary. Over the next few weeks, there were reports of the discolored water from Berkeley, Emeryville, Richmond and San Francisco.

On Aug. 17, a fisherman in Richmond reported that he was catching bait fish that died within about 30 minutes after he placed them in a tank on the boat. On Aug. 22, Baykeeper received a report of dead fish in the Foster City area, including a four-foot shark.

"Then we started getting more reports here and there of fish that had washed up, with alarming numbers of sturgeons that were found on shore,” Mevoli said.

Mevoli and other environmentalists took an aerial survey of the bloom and she said that it had spread as far north as Vallejo and Benicia and south of the Dumbarton Bridge. “It was very illuminating and devastating at the same time to see the magnitude of bloom,” she said.

The algal bloom’s most dramatic impact came over the weekend, when hundreds of dead fish washed ashore on Oakland’s Lake Merritt.

“Sunday morning at Lake Merritt everything died basically,” said Tighe, who also documented the dead fish there. “I couldn't see sand because there was so many dead fish.”

Tighe said that the lake was depleted of oxygen, which appears to have caused the die-off there.

Mevoli said that it’s unclear how long the bloom could go on, as it is dependent on weather conditions, like warm water and sunlight, and the algae’s access to nutrients. The necessary nutrients could be coming from wastewater treatment plants which release phosphorus and nitrogen into the bay, she said.

Cities could help prevent future blooms by taking on green stormwater infrastructure projects that filter such nutrients before they get to the bay and limiting the use of synthetic fertilizer and pesticides, she said.

And while the bloom primarily affects fish, Mevoli said that it can cause skin and respiratory irritation in mammals, like humans, and advised people not to go in the water nor allow their pets to go in the water. She also said that, since it’s unclear whether the fish die-offs are caused by oxygen depletion or toxins, that people should avoid eating seafood caught in the bay for now.

It’s also unclear what the long term environmental impact will be. While some dead fish, such as anchovies in Lake Merritt, have short lifespans and will replenish quickly, Tighe said that the deaths of the endangered sturgeon was particularly alarming as the fish have a long and complex life span.

“These sturgeon, these are like watching redwoods burn,” Tighe said. “These are decades-old fish.”