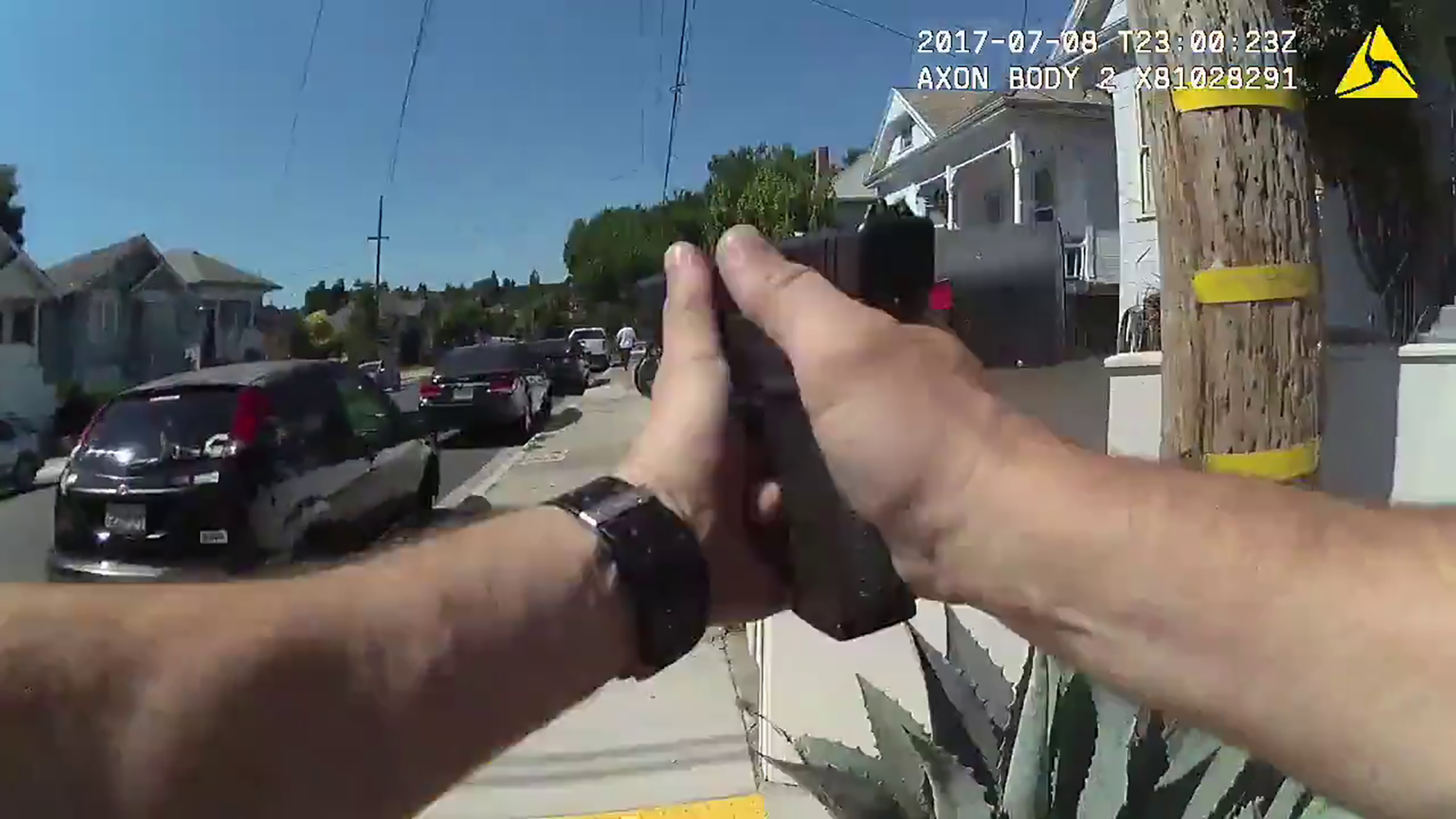 A still from Vallejo police Det. Jarrett Tonn's body-worn camera which shows the moment he fires three shots at a fleeing man in July 2017.

VALLEJO – Three years before Vallejo police Det. Jarrett Tonn shot and killed Sean Monterrosa, he fired at a carjacking suspect who was fleeing on foot in a residential neighborhood. Tonn insisted that he saw the man, Victor Hurtado, with a gun, but none was ever found.

New body camera video obtained by the Vallejo Sun shows the best view available of the shooting. Tonn stopped and fired three times at the man’s back as he ran down a sidewalk. Despite finding no gun, Tonn told investigators in a recorded interview obtained through a public records request that “For me to say someone has a gun, it means they have a gun. It means I saw a gun.”

When Tonn shot and killed Monterrosa three years later, he also said he saw a gun, but Monterrosa had no gun.

Despite the lack of a clear threat from Hurtado as he ran away and Tonn’s questionable statement about the gun, Tonn was not disciplined. In fact, a Vallejo Police Department use of force review board found that Tonn should have been quicker to shoot: It recommended that officers be trained to shoot without fear of any civil unrest that may follow the shooting.

But in his interview, Tonn never expressed such a fear. The department did not respond to questions about how this recommendation was implemented or what it meant for the shooting of Monterrosa.

Tonn joined Vallejo police in August 2014. Before that, he worked for seven years at the Galt Police Department in Sacramento County, where he was an undercover detective and the first officer to arrive when his cousin, who was also an officer, was shot and killed.

Since being hired by Vallejo, Tonn has been sued for alleged civil rights violations four times and been involved in four shootings. The city paid $52,500 to settle a civil rights lawsuit brought by a man whom Tonn pulled from a vehicle and held on the ground after he started filming a traffic stop in 2017.

Tonn’s first shooting in Vallejo happened less than a year after he was hired. According to the department’s review of the incident, on Feb. 22, 2015, Tonn and Officer Gary Jones chased the driver of a stolen vehicle for a short time. After the driver, Gerald Brown, stopped, Tonn and Jones got out of the car. Brown allegedly then put the car in reverse and struck Tonn and Jones’ patrol car. Tonn fired 18 times and Jones fired once, wounding Brown.

“Do not fucking move!” Tonn shouted just after he shot Brown. “You move I will put a bullet in your fucking head, do you understand me? You will die.”

A department review board determined that the use of force was appropriate to “effectively neutralize the threat” as handguns can be “unpredictable and ineffective” when fired at cars. Other departments, however, have changed their policies to prevent officers from shooting at moving vehicles.

Tonn was one of several officers who fired on a wanted carjacking suspect, Kevin DeCarlo, on May 31, 2017. He and other detectives were surveilling a home near Martinez where they believed DeCarlo was inside.

One of the detectives, Sean Kenney — who killed three people in 2012 — tried to block DeCarlo’s car in with a pickup truck. DeCarlo allegedly rammed the driver’s side of Kenney’s truck. As other detectives moved in, Tonn and two other detectives fired into the car. Kenney got out of the truck and opened fire. DeCarlo was wounded but survived. A department review board found the shooting to be within policy. An excessive force lawsuit brought by DeCarlo’s passenger, who was not injured, is pending.

Tonn moved back to patrol temporarily after the DeCarlo shooting. He fired his weapon again a little more than a month later, on July 8, 2017. Kenney sent a department-wide email about two suspects in an armed carjacking in Napa County who were wanted by the sheriff’s office there. In an interview with investigators later that night, Tonn said that he found out that a phone taken during the carjacking had been located in Vallejo.

As Tonn drove by shortly before 4 p.m., he saw what appeared to be the stolen car near City Park.

A man ran, but Tonn circled the park, jumped out of the car and sprinted towards the man, later identified as Hurtado, who was hiding in a playground. Hurtado soon took off on foot and Tonn followed.

In a recorded interview later that night, Tonn said he saw a pistol in the man’s right hand.

Tonn recalled that at that point he was within 10 yards of the man and broadcasted on radio, “He has a gun, he has a gun.” Tonn said it was unusual for him to say explicitly that someone he was chasing had a gun. Despite being in “dozens” of foot pursuits of people with guns, Tonn said he often wouldn’t say they have a gun, but that they were “reaching for their waistband” or “might seem to have a gun.”

Tonn said that he yelled several times that he was going to shoot Hurtado as the two continued running. Hurtado then shoved the gun back in his waistband, according to Tonn, which he said made him even more nervous, as he was surprised he didn’t try to get rid of it. Tonn said he intentionally slowed down and allowed Hurtado to gain distance on him. He said Hurtado tried to pull the gun back out of his waistband again while still running away.

After turning a corner, Tonn stopped and fired three rounds at Hurtado, who was nearly a block away down Santa Clara Street at that point. Hurtado turned another corner and by the time Tonn got there, he was out of sight. Tonn, still pointing his gun up the street, called on the radio, “I lost the subject. He was reaching for his waistband, had a gun.”

Napa County Sheriff’s deputies arrived as Tonn walked down the street. Two women ran out of a home about half a block up the street. Tonn said during his interview that they told him the man had thrown a gun, but in body camera video, they only said that he was hiding in a shed in the backyard, not that they’d seen a gun. Tonn then turned off his body camera. He said it was because he was about to discuss a tactical plan.

Tonn was relieved by another officer and left. Hurtado was arrested in the shed, but no gun was ever found. The district attorney’s office declined to prosecute Hurtado for resisting or obstructing an officer and he was released two days later. Prosecutors charged Hurtado with a carjacking in Napa County. He accepted a plea deal for 10 years in prison.

The only evidence that investigators ever found that Hurtado had a gun was a blurry frame from a porch camera that captured the shooting. Detective Rob Greenberg wrote in a report that there was an object visible in Hurtado’s hand. “I can clearly see the item is larger than a cell phone and probably the gun seen by Ofc. Tonn,” Greenberg wrote.

The department’s Critical Incident Review Board examined the incident the following February. The board found that the shooting was within department policy and that Tonn’s tactics were sound and within accepted practices. In fact, because of Tonn’s assertion that he saw Hurtado take his gun out and put it back in his waistband multiple times, it found that Tonn was not quick enough to shoot. It recommended that officers be trained to react “without consideration for potential future civil unrest.”

After police officers in Minneapolis killed George Floyd in May 2020, protests swept the country, including in the Bay Area and Vallejo. Caravans traveled from city to city looting stores, leading Vallejo to impose a curfew.

At about 12:30 a.m. on June 2, Vallejo officers, including Tonn, responded to reports of looting at a Walgreens on Redwood Street. As the officers pulled into the parking lot in an unmarked pickup truck, Tonn, who was riding in the back seat, fired a high-powered rifle through the windshield, killing 22-year-old Sean Monterrosa of San Francisco.

Tonn got out of the car. “What did he point at us?” he asked the other officers.

But Monterrosa had no gun. Police found a hammer in his sweatshirt pocket. Although not visible in any video released by the department, police initially reported Monterrosa was on his knees when Tonn fired.

The Vallejo police investigation into Monterrosa’s shooting, as well as an independent review by the OIR Group, is ongoing.

Solano County District Attorney Krishna Abrams recused her office from investigating the shooting. On Thursday, state Attorney General Rob Bonta announced that his office would conduct an independent review of the shooting, citing the “failure of the Solano County DA to to fulfill her responsibility.”

In response to Bonta’s announcement, John Burris, an attorney for Monterrosa’s family, said the Vallejo police command staff “knew or should have known that this was Tonn’s fourth shooting in five years.”