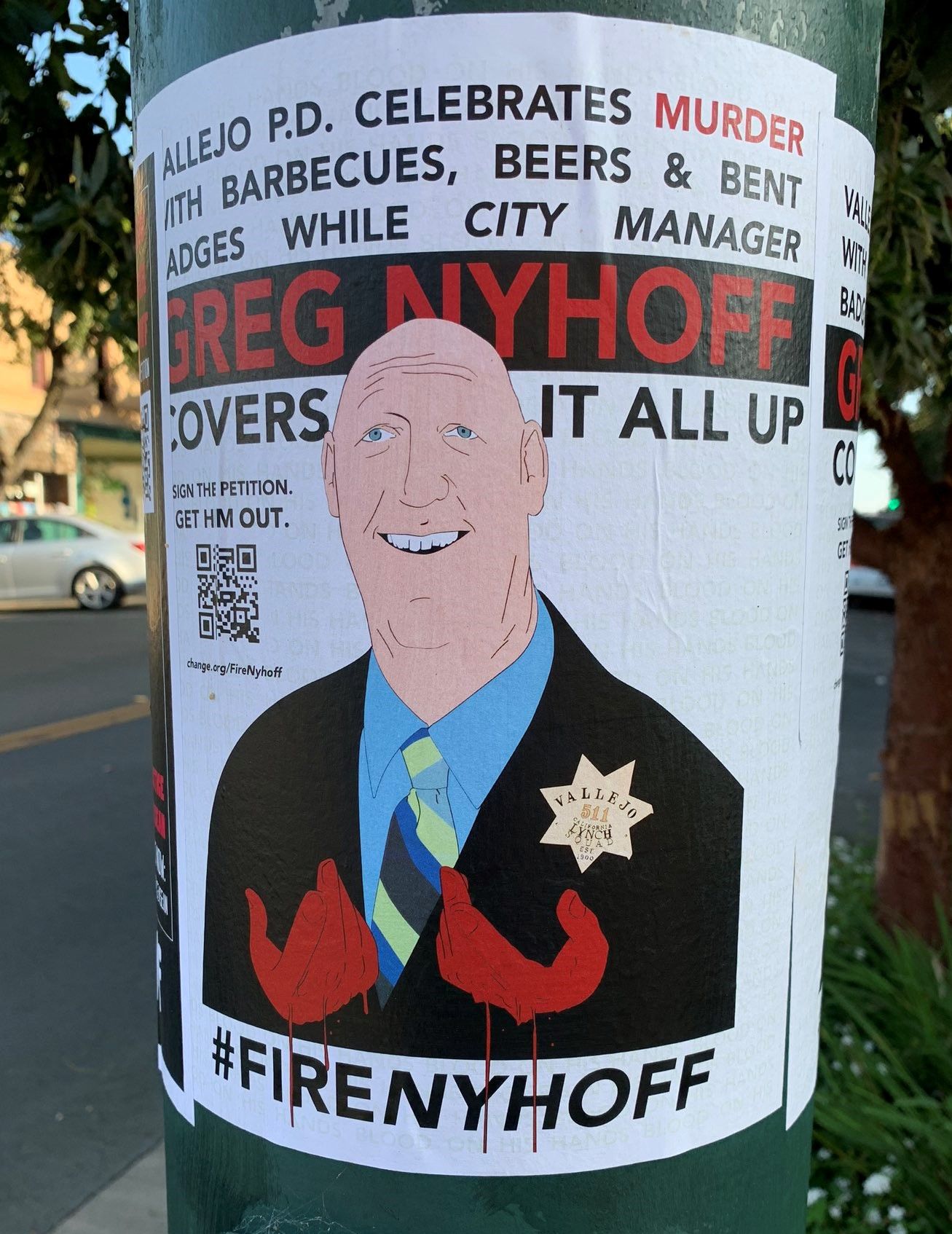 Criticism against Vallejo City Manager Greg Nyhoff continues to mount as a series of posters were plastered throughout Vallejo last week calling for Nyhoff to be fired.

The unflattering artwork criticizes Nyhoff for failing to address badge-bending involving several Vallejo police officers. The independent newsroom Open Vallejo first reported in July that Vallejo police officers would have the tips of their star-shaped badges bent following their involvement in a fatal shooting.

Besides the bent badges, officers celebrated the fatal shootings with beers and barbecues. It was also reported that Nyhoff knew about the practice – which the city manager’s office denied in the report.

“Vallejo P.D. celebrates murder with barbecues, beer & bent badges while City Manager Greg Nyhoff covers it all up,” one of the poster states.

The same poster shows Nyhoff with his hands dripping blood.

Reached for comment about the art, Nyhoff told JohnGlidden.com this week that “there are numerous false allegations being said about me via posters, petitions, emails or verbal. “

He confirmed that some of the art has been placed outside his home.

“My passion for a better Vallejo will continue despite attempts to intimidate me such as taping posters to the mail box at my home and placing them at my doorstep and on my vehicles and at my neighbors homes,” Nyhoff said. “I will continue to serve the community ethically and will pursue implementation of reforms and changes where necessary. Vallejo is a beautiful community of 120,000 people and I will serve to improve our organization, rebuild their trust bring about prosperity for all Vallejoans!”

In a second poster, Nyhoff is drawn to resemble the vampire, Nosterafu, with “corruption” written in his mouth.

No one has come forward claiming credit for the artwork.

The art includes a link to a petition demanding Nyhoff to be fired. As of Sept. 22, the petition had received over 2,800 signatures.

The community organization, Vessels of Vallejo, which started the petition called the Nyhoff artwork “beautiful.”

“Change cannot come to Vallejo until we get rid of the heart of the problem,” the group wrote on Twitter.

According to the group’s Facebook page, Vessels of Vallejo was created to “bring an end to the oppressive system that relies on the policing and the criminalization of disadvantaged people, specifically those of the black and brown community.”

Badge 511 was worn by former Vallejo police Chief Robert Nichelini. His son, Vallejo police Lt. Michael Nichelini, was placed on paid administrative leave recently in connection with the destruction of evidence in the fatal officer-involved shooting on Sean Monterrosa outside a Vallejo Walgreens on June 2.

Vallejo police Det. Jarrett Tonn fired five shots with his high-powered rifle through a windshield of a moving police vehicle, striking and killing Monterrosa. Following the shooting, the windshield was destroyed without prior approval from the city.

Meanwhile, badge 620 was worn by Sean Kenney, who shot and killed three people within a five month span in 2012. Kenney has since retired from the department and gone one to start his own police consulting firm.

It appears the same artist drew similar art of interim City Attorney Randy Risner last month. That art was plastered in the downtown and waterfront areas with the words “no justice” in Risner’s mouth.

Risner was criticized for his decision to seek a venue change and gag order in the Monterrosa lawsuit.

The art requested that the Vallejo City Council to pass on Risner for the permanent city attorney position; which the council did.